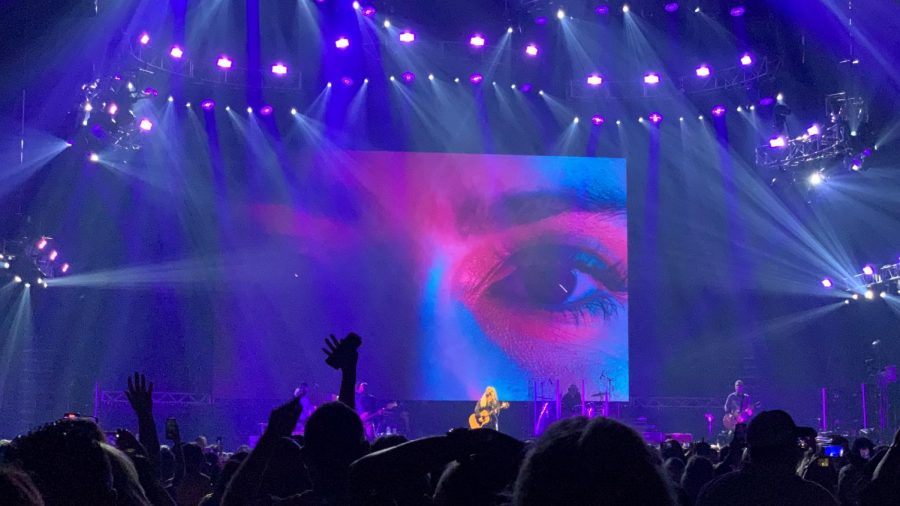 After seven Grammy awards, 17 platinum U.S. records, one diamond U.S. record and more than 60 million copies sold of her hit 1995 studio album “Jagged Little Pill,” you’d think Alanis Morissette would be ready to settle down. However, the 90s icon’s concert at Bridgestone Arena on Sept. 17 definitely negated any of these assumptions.

Morissette’s tour is centered around the 25th anniversary of the highly acclaimed album. It was most recently listed by Rolling Stone as No. 69 on its 2020 list of “The 500 Greatest Albums of all Time.” The world tour began in early 2020 but was postponed due to the COVID-19 pandemic.

Opening for Morissette was rock band Garbage, a popular group from the 90s with hits such as “Stupid Girl” and “Only Happy When It Rains.” Garbage’s lead singer Shirley Manson lit up the stage with her presence, even walking through the crowd at one point while crooning into the mic. The band’s guitar riffs, vocals and intense drum beats made for a perfect start to the night.

Morissette opened her part of the show with a montage of her music videos, interviews, concerts, television appearances and references to her works in pop culture over the past two decades—an ultimate way to encapsulate the effect that her work has had on the world.

She opened with the song “All I Really Want,” which also appears first on the 1995 album. Following that, Morissette performed hits like “Hand in My Pocket,” “Ironic,” “You Oughta Know,” “You Learn” and “Head Over Feet,” all of which had the crowd excitedly screaming along.

Alanis Morissette’s album recordings simply do not do her justice. Yes, she sounds amazing, but her presence onstage as a performer and her interaction with her accompanists is hard to beat. Morissette stood on stage in a simple black loungewear set and effortlessly belted out all of her songs. There aren’t many performers who can carry themselves like that and still hold the attention of hundreds of people.

All of my personal favorites were on her setlist, even her melancholy but touching song “Smiling.” The song is a new addition, written when her album was converted into a jukebox musical on Broadway.

For her encore, the singer performed her hit “Thank U” with a touching collage of tweets from her fans listing what they’ve been thankful for during these unprecedented pandemic times. It ended the show on an emotional and reflective but ultimately uplifting note.

It’s safe to say that even after 25 years, “Jagged Little Pill” still has a hold on the world, and it doesn’t look like it will be “Uninvited” from the scene any time soon.