Eight days after the flood, workers are replacing the baseboards and ceiling tiles to repair water damage to get students back in their dorms. 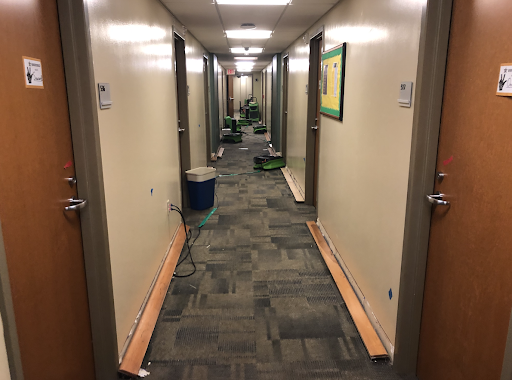 Damage to the fifth floor of Gillette House, as photographed on Sept. 17, 2021. (Photo courtesy of Josh Uterstaedt)

Forty-four first-year students were sent to the Hayes Street Hotel late on Sept. 14 after Gillette House severely flooded due to the fire sprinkler system being set off. Some are still displaced in the hotel over a week later.

At 11:02 a.m. CDT on Sept. 21, some Gillette residents received an email stating that they should expect to stay at the Hayes Street Hotel through Sept. 26. These students received $25 in Commodore Cash every weekday to purchase dinner from GrubHub and $40 for meals over the weekend. At 5:23 p.m. CDT on Sept. 17, Gillette residents received another email stating that the shuttle service initially in place to bring students to their classes would not be available over the weekend of Sept. 18. Instead, students could complete a “Ridehail Waiver” to receive two fully-funded Lyft codes to travel to and from campus throughout the weekend.

“I haven’t met anyone who used the Lyft,” Ben Hawley, a first-year Gillette resident, said. “What they needed was to just have the [Vandy] Van service be going so we could get to the football game and all that.”

Josh Uterstaedt, a first-year Gillette resident, shared that Hayes Street Hotel has been providing breakfast, and therefore he has not had to use the extra Commodore Cash. He said that the quality of the hotel made up for the inconvenience of being displaced off-campus.

“The hotels are quite nice: my roommate and I each get our own larger bed,” Uterstaudt said.

The extent of the damage to the dorm rooms varies from floor to floor in Gillette.

“We were lucky,” Uterstaedt said. “The only things that got wet were a rug and some random things on the floor, but the room is still in disarray as things were moved out of the way [so the workers could] access the baseboards.”

The Office of Housing and Residential Experience (OHARE) addressed student concerns regarding the remediation process in an email sent to residents at 5:23 p.m. CDT on Sept. 17. The email reads that OHARE, Vanderbilt Facilities, Vanderbilt University Public Safety (VUPS) and ServPro—a fire and restoration clean-up company—are partnering to repair Gillette House.

“We understand that the equipment noise used during the process can be bothersome to some residents; however, it is important that the equipment remains running in order to dry the building materials in a timely manner,” the email reads. “Please do not unplug or tamper with any equipment.”

There are fans on each floor of Gillette to filter out the moist air and speed up the drying process. The baseboards in Gillette are currently pulled off of the walls in both the hallways and inside of dorm rooms.

“They came in a few days ago and ripped up a lot of the wood floor runners,” first-year and Gillette resident Owen Smith said. “When you walk down the hallway, you see empty rooms they’re airing out which is really weird.”

Despite Vanderbilt’s effort to accommodate students, many spoke to The Hustler about their stress regarding the replacement of their personal belongings and the uncertainty surrounding their living situation.

“They’d let you know midday whether or not you’d be spending the night and that was super stressful because you were nervous that you might not be able to get your stuff from your hotel room. Pretty much every other day you have to go down and get your key to your hotel room activated,” Hawley said. “The distance and Vandy’s disorganization has made it frustrating.”

At 6:38 p.m. on Sept. 20, Gillette residents received another emailing detailing the procedure for filing insurance claims for items that were ruined by the floods. If students do not have homeowner’s, renter’s or traveler’s insurance, they were advised to contact OHARE by Oct. 4 at 5 p.m. CDT.

According to the email, the university is also offering a temporary laptop checkout option for students whose computers were subject to water damage. The email also says that Vanderbilt is working to assist international students whose passport and/or government documentation may need to be replaced.