Vanderbilt running back Re’Mahn Davis out for the year

Vanderbilt's leading rusher is done for the year due to a torn ligament in his toe that requires surgery. 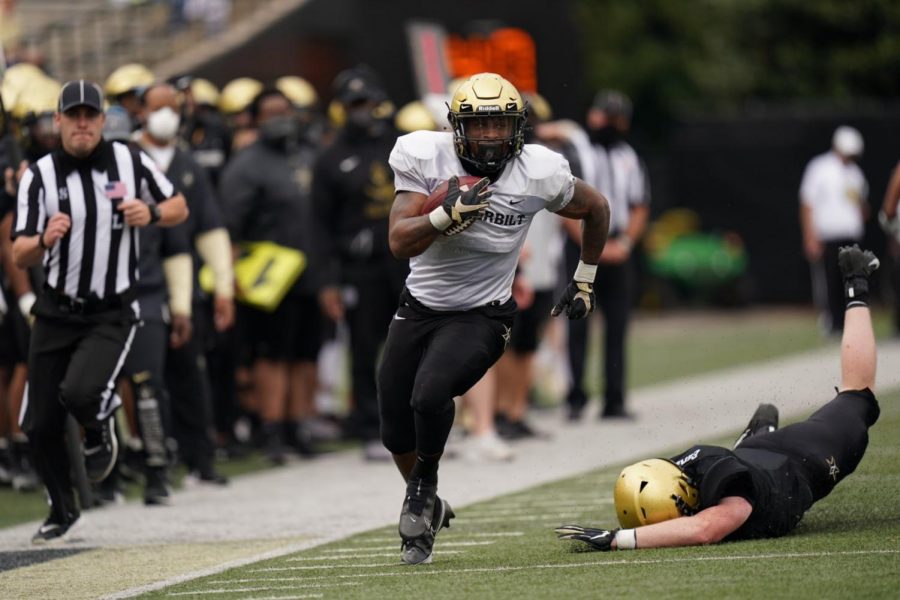 Running back Re'Mahn Davis breaks a tackle in the Black and Gold Game on April 17, 2021. (Vanderbilt Athletics).

Vanderbilt running back Re’Mahn Davis announced via instagram that his season will be cut short due to injuries that require surgery.

“My time here at Vanderbilt has been spent putting in hard work both on and off of the field. That hard work has been shown this season but has not come without struggles. Unfortunately, my season has been cut short due to recent injuries requiring season ending surgery. With that being said, I am excited to support my teammates as they continue the season and look forward to their success,” Davis said via Instagram.

Head coach Clark Lea confirmed that Davis would indeed miss the remainder of this season due to a torn ligament in his toe that now requires surgery.

“Re’Mahn had a consult with our doctors yesterday evening and he is going to have surgery to repair a torn ligament in his toe,” Lea said during Tuesday’s media availability. “He has battled through some nicks all season and I’m anxious for him to obviously be a part of this Team 1 and continue to help us in the manner that he can. He is a smart player so he will be like another coach on the field.”

Davis, a transfer from Temple, appeared sparingly in the second half of Vanderbilt’s loss to Stanford this past weekend after appearing to injure his leg. He was then seen in a boot on the sidelines during the second half. His backup, sophomore Rocko Griffin, picked up the slack in his absence, totaling over 100 yards rushing for the first time in his young career. Davis’ season ends after he notched 211 total yards in three performances for the Commodores this season. He scored his first and only touchdown of the year in the first quarter against Stanford.

His absence will mean an increased workload for Griffin as well as freshmen Patrick Smith and Dylan Betts-Pauley. Griffin has rushed 28 times thus far this season for 131 yards and is averaging 4.7 yards per carry while Smith has totaled four carries for 17 yards. Betts-Pauley has not yet received a carry. Freshman James Ziglor III is also listed on Vanderbilt’s depth chart at running back this week after formerly serving only as a defensive back.