Robert J. Sawyer's “Quantum Night” provokes a deeper contemplation into your personal relationship with the world. Zombie, psycho or genius: which one are you? 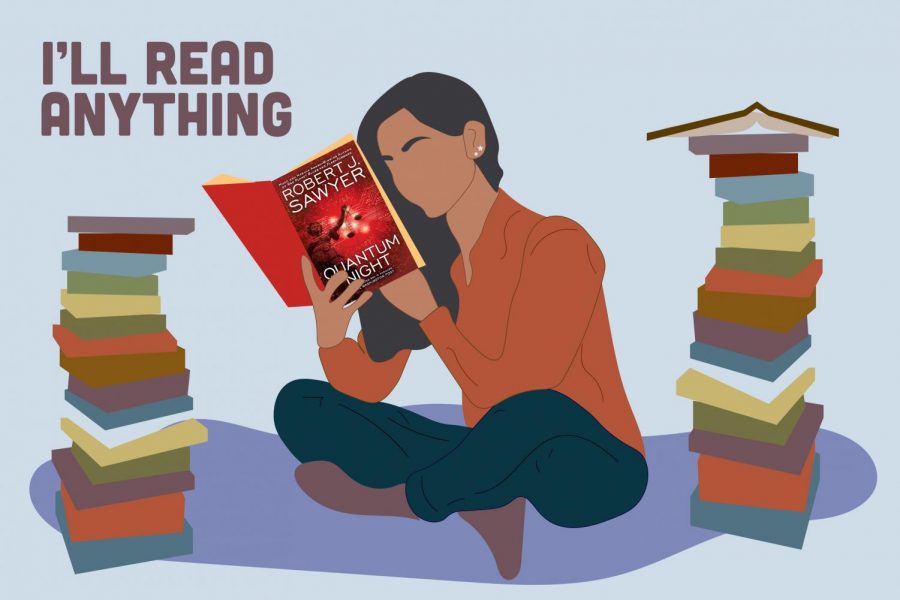 As Vanderbilt students, there’s one thing we all have in common—we’re nerds. Don’t fight us on this just yet; odds are, every one of us can look back nostalgically to our glory days as middle school high achievers when we devoured shelves upon shelves of fiction books. As the Life Staff, we’re on a quest to find that feeling again, and that starts with picking up a book. Enter our candid review series: “I’ll Read Anything.” Read on to find a novel that’ will help you embrace your middle school nerd again (minus the braces).

Take Dan Brown’s “Robert Langdon” series but make it Canadian, swap out cryptography, history and “symbology” with psychology, quantum physics and ethics and you’ve already got the gist of Robert J. Sawyer’s “Quantum Night.” Without giving too much away, you’ll also find satirical portrayals of football riots, Vladimir Putin and even the college Chad personality type (named Travis here, but we can excuse that). It’s a lot.

I encountered “Quantum Night” towards the end of last semester, my head buried deep into psychology classes as I prepared for finals. Tired of going through slides and forcing my brain to memorize dates, terminologies and experimental procedures, I flipped through some pages and found this selection:

“Well, I always said psych students were a little weird.”

“It’s not just that,” Menno replied. “Psych attracts a certain kind of student: kids trying to make sense of themselves. Cheaper than therapy, you know?”

As the “psych student” in question, I felt personally attacked. But of course, I also wanted to know what else the book has to say about us—so I found out.

This sci-fi story revolves around a dapper, middle-aged psychologist named Jim Marchuk—erudite, polite, articulate of his values and basically an archetypal university professor—solving the mystery behind a six-month period of amnesia he experienced in his 20s. As he investigates, he meets a series of characters that each provide some clue and introduce their own psychology-related theories behind his memory loss. Having learned about many of these theories in class, I found myself exclaiming inside, “Wait, that’s actually based on … [insert study here]!”

For physics, psychology or philosophy nerds, that means names like Roger Penrose (winner of 2020 Nobel Prize in Physics), David Chalmers, Stanley Milgram, Jeremy Bentham, Daniel Denett and many more are referenced in the story. At the very least, all those theories and experiments you crammed in your brain for exams are put to use here.

The heroine of this book is his college girlfriend Kayla, a quantum physicist. You’d think she’d be a way more interesting character but unfortunately, most of the time she stands on the sidelines and simply agrees with Jim when asked. Besides going to school at the same university (and having their fair share of affairs), both of them also happen to come up with their respective theories of psychopathy, which is where the science of the book continues to develop.

While Jim connects the lack of microsaccades (tiny spasms of the eyes to relax and adjust focus when staring) to the lack of empathy that creates “nutjobs,” Kayla’s is a bit more difficult for us laypeople to understand.

She guesses that all people can be divided into one of three groups based on the number of electrons in superposition in their brain’s tubulin (a type of protein). People in Q1, those with only one electron in that state, have no consciousness at all and only follow others’ opinions without thinking. Q2 people, those with two superpositioning electrons, are self-conscious but have no empathy, therefore rendering them psychopathic. Q3, those with three, are apparently the superior people, who experience self-consciousness and empathy.

Here is where it gets more interesting: the reason behind their shared fascination towards this is that at some point, both of them were Q2s, the psychos. May want to think twice before doing or saying anything that might piss off professors.

The book also presents various methods for changing one’s grouping, such as: the quantum “tuning fork,” the malfunction of an apparatus monitoring brain activities, general anesthesia, major head trauma … the list goes on. Apparently, in this universe, there are lots of ways to change your personality, almost as easy as getting different results on your MBTI—and definitely much easier than changing your zodiac sign. Way to make me anxious about every time I accidentally hit my head.

Eventually, the book escalates down a rather controversial path.

Upon realizing that they can potentially change the electron states of everyone on Earth with the university’s massive synchrotron, the good old utilitarian Jim is convinced that the only right thing to do is to turn all of the Q1s into Q3s, quadrupling the “smartypants” population.

Sure, current Q3s will become psychopaths, but who cares? It is for the maximum hedonistic calculus, the greatest good for the majority and all that.

While I personally found the ending underwhelming, “Quantum Night” was still a good read. For those wondering why the professors of your classes (and maybe some of your friends) are the way they are, check it out for a fancy—and absurd—theory about their questionable behaviors.