The squad combined for 16 wins in doubles and singles in the tournament, with Lee making it to the singles final. 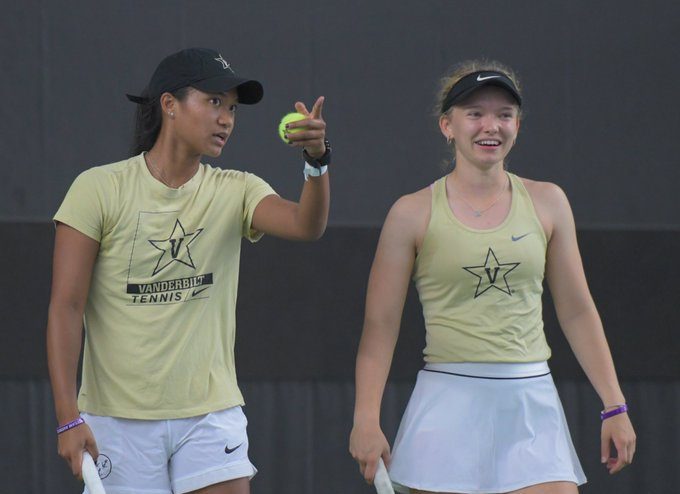 Vanderbilt sophomore Anessa Lee put together a sensational performance in the season-opening Debbie Southern Furman Fall Classic this weekend, alongside a solid performance from the doubles teams. The other participating players came from 13 schools across the nation, with only singles and doubles competition at the event. Altogether, the Commodores came away with 16 victories and a lot of experience in their first weekend of the 2021-22 season.

“We lost some close sets and didn’t quite get through the finish line in some three-setters, but we will learn a lot from those kinds of matches early in the year,” head coach Aleke Tsoubanos told VUcommodores.com.

Lee, in particular, continued to show that she will be a force to be reckoned with during the coming season.

“She is getting better by the match and nearly came through today in her final, and I just love the way she competes,” Tsoubanos said.

Lee started the weekend for Vanderbilt with a straight-sets (6-1, 6-0) victory in singles against nationally ranked, No. 72 Eleni Louka of Clemson. The rest of the team struggled in Round 1, losing the other seven matchups in the singles division. Sophomore Anna Ross and graduate transfer MaryAnn Rompf were both able to extend their matches to three sets despite their losses.

“The competition here is awesome and our kids fought well in singles,” Tsoubanos said.

The team found more success in Round 1 doubles, where sophomore Holly Staff and junior Marcella Cruz won 6-3 against the No. 38 duo of sisters Carolyn and Anna Campana from Wake Forest.

Ross, ranked No. 8 in doubles with Staff, partnered with Rompf for the doubles competition at Furman, though they fell 6-1 to the Duke team of Kelly Chen and Eliza Omirou.

Lee and her partner, graduate transfer Yufei Long, also lost 6-3 against Thomas and Labrana of Texas.

Freshman Brooke Stevens started her doubles career off with a win alongside junior Dasha Kourkina. They carried the set 6-3 against the Georgia Tech team of Rosie Garcia Gross and Sophia Sassoli to advance in the Winner’s Bracket of doubles.

Lee’s singles success carried forward into the semifinal round of bracket, as she strung together winning sets of 6-2 and 6-3 on Malaika Rapolu of Texas to move forward into the final. Waiting for Lee was freshman Emma Jackson of Duke, who was a former five-star recruit in the Class of 2021.

Jackson and Lee had a back-and-forth first set, going to tiebreak. Lee finally pulled away 7-6 (3), putting herself one set away from the finals win at Furman. But Jackson rallied, going 6-2 in the second set and 6-4 in the third to clinch the singles title within their division.

In the doubles semifinals, the teams of Staff/Cruz and Stevens/Kourkina both split their matches. Stevens and Kourkina lost 6-1 to Simran Kortikere and Gabby Cusano of Texas before turning in a dominant 6-1 performance against USC’s duo of Kendall Couch and Elise Mills. Likewise, Staff and Cruz lost their first match 2-6 against Tennessee’s Kylie Duckworth and Eleonara Molinaro, but returned to defeat Rapolu and her partner Bella Zamarripa 6-3.

The two teams’ losses eliminated the Commodores from the Winner’s Bracket, though the other pairings who lost in Round 1 continued play in the consolation matches. Lee and Long won both of their doubles consolation matches, and Ross and Rompf lost their first but came back to win their second and final match of the tourney.

In the consolation bracket of singles, the team continued to gain valuable experience in their attempt to bounce back from tough first-round losses.

Staff pulled off a straight-sets (6-3, 7-6) victory against Esther Adeshina of Tennessee, but her redemption run fell just short as Casie Wooden of Wake Forest carried two of three sets (6-3, 3-6, 6-1) in the next round.

Kourkina dominated both of her matches, with a 6-1, 6-4 win against Ana Cruz of USC and a 6-2, 6-4 victory against Sophia Hatton of Clemson.

Ross had a tough consolation round, with two losses. She gave an admirable effort in the first, with Allie Gretkowski of USC narrowly escaping 6-4, 6-7, 6-3 in a three-set showdown. But Ross had to retire after only two games in the second match, as Tamara Racine of Michigan State walked away with the match win.

Cruz nearly won both of her matches, losing a tiebreak 7-6 (5) to Elise Mills of USC in the first. She rebounded with a complete 6-3, 6-4 effort against Callie Creath of Tennessee.

Rompf was able to carry both of her consolation matchups in only two sets against Gross of Georgia Tech and Olivia Symons of Tennessee.

Finally, Stevens split her two matches, winning against Ilayda Baykan from Furman and losing in three sets to Saby Nihalani of Wake Forest.

The Vanderbilt team looks forward to their next matches on Oct. 8-10 as the host school of the June Stewart Invitational at the Currey Tennis Center on West End.