What is it with Eren Yeager? A recap of “Attack on Titan”

Now a big fish in a big pond, the troubled youth seeks both revenge and purpose in the three years he has to live. 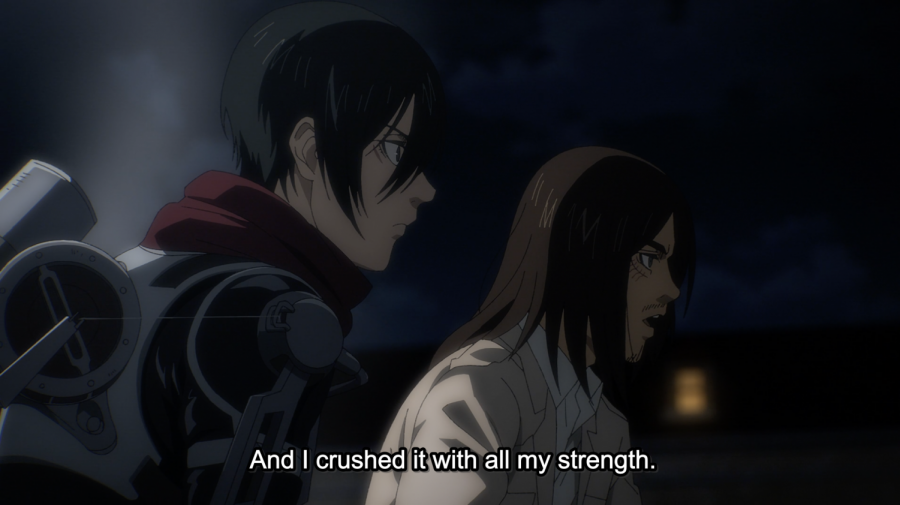 In addition to dashing new haircuts, season four gives us new, unpredicted dynamics between Eren and his friends. Screenshot by Stanley Zhao (MAPPA/Attack on Titan)

In perhaps one of the most dramatic twists in anime history, we watch by the sidelines in despair as our beloved Eren Yeager finally subsumes to the mania of obliterating the world beyond Paradis. Yes, while it is a shock that “Potato Girl” Sasha Blause met her demise with the most profound last word in history (“Meat”!), we forever mourn the headstrong “Survey Corps” Eren who was quick to defend integrity, compassion and more importantly, friendship.

From a humble beginning in the far-flung town of Shiganshina to being the vessel of hope for the “People Within the Walls,” the downward spiral of Eren’s psyche is the product of years of internal turmoil—and probably a lack of access to a certified therapist or psychologist as well. Of course, some of this isn’t any fault of his own. Here is a quick breakdown of numerous catastrophic instances that would rattle anyone’s childhood like a clarinet played by middle school band kids: witnessed human traffickers kidnapping Mikasa (and then killed those kidnappers with a dagger), watched his mother get eaten by a Titan, got eaten by a Titan himself after rescuing his close friend Armin from its jaws, realized he can transform into a Titan, and watched seasoned soldiers decades older than him die on his behalf on the hypothesis that he is Eldia’s only hope.

Given this extensive list of traumatic experiences, we AOT enthusiasts should not be surprised at Eren’s turnout. This piece of a man lived through perilous years unfathomable to any of us sitting in front of the screen munching on those nasty Takis that millennials always rave about.

However, it takes much more to catalyze those experiences into an animus that develops Eren’s character arc. Ever since the introduction of Eren in episode one, he has always had a penchant for being scatterbrained, even volatile and unpredictable on many occasions. Ranging from small fist-punching skirmishes with his fellow Scouts to the brash assault on Liberio, what we attribute as simply teenage angst continued to cement him into the person we come to love and cherish, who absolutely loves to stew himself in various messes. This is not to mention that technically Eren is the direct cause of the Titan’s breach on Wall Maria in the first place…but I won’t reveal any more information other than this. The true reason for why he became this way is his perspective of what it means to be the vanguard of one’s own destiny rather than having one’s liberty tethered to various confinements.

Freedom is a phenomena ingrained in the characterization of Eren early on. In season one, he demonstrates his disgust at the fact that Eldians (though this wasn’t a term he was familiar with back then) were herded like livestock within the three Walls, irrevocably dependent on the inanimate barriers. Humans are merely supple sheep ready to be devoured to extinction by thirsty wolves/Titans outside the Walls’ gates. Such dependency is the source of Eren’s agitation and anger, in that by relying on an external entity, the ability to be independent is abjectly hindered.

We realize Eren’s disgust at any form of helplessness or dependency in future episodes. For instance, we get a glimpse of Eren’s hatred for complacency in his reaction to being offered bread rationed by the government after the fall of Wall Maria. His livelihood being subjected to the “compassion” of the government is unacceptable to him, especially when he knows that the monarchy is reluctant to allow the citizens of Wall Maria to inhabit inner walls. He also expresses his contempt for Mikasa’s protectiveness and overall clinginess to Eren. With no consideration of crafting an identity for herself, Mikasa fashions herself as literally Eren’s bodyguard.

And for those Mikasa/Eren shippers out there, this dynamic is by no way conducive for a healthy romantic relationship. Don’t even think about it. I’ve watched enough of “90 Day Fiance” and “Love Island” to know a toxic relationship when it’s in front of me.

Various symbolism moments laced throughout the seasons perhaps hint at this aspect of his character as well. From being apt at the relatively versatile omni directional mobility (OMB) gear to donning the winged symbol of the Survey Corps to being the holder of the Attack Titan, this imagery signifies his every attempt to break down the walls and see the ocean with Armin.

Now that we’ve established Eren’s intrinsic motivation for independence, we must delineate its connection to his current plan-of-action: initiating the Rumbling. An event where the Walls dissolve into monstrous Wall Titans who can stomp the earth into smithereens, Eren plans to activate this power of the Founding Titan so that outside threats to the safety of Paradis can be eradicated, regardless of whether or not one has direct correlation with the infringement of the Subjects of Ymir. To boil it down to laymen’s terms, Eren is initiating a massacre. So yeah, he’s pretty much your “eye for an eye, tooth for a tooth” kind of guy.

As if the situation isn’t complex enough, Eren recognizes that the Eldians themselves played a role in cementing the global xenophobia against them. In ancient times, the Eldians’ possession of the Nine Titans granted it almost immutable dominion over the Eldian commonwealth—rather mercilessly. Eren grappled with the dilemma of balancing what it means to revenge for his people’s mistreatment as well as his people’s hand in initiating the matter in the first place. Thus, his ultimate goal is to harvest the power of the Founding Titan to sterilize all Subjects of Ymir. By rendering them infertile, there will be no further generations of Eldians, and by correlation, the ability to transform into Titan dies with them. This is in conjunction with his vision to demonstrate Eldia’s might. In a sense, calling on a Rumbling ridding Eldia of its enemies will free Eldians of their oppressors and sterilization will free them of their “bondage” of procreating future generations of Eldians/Titans.

From Eren’s perspective, what he’s initiating is far from the ideal scenario. However, he believes he needs to be the “bad cop” in the situation—the situation namely the repressment of Eldians. For the sake of the future, he believes he must follow his calling to take up the gauntlet and initiate a new chapter of history. As we anxiously anticipate the second half of season four, we’ll just have to wait for this history to unfold…