A few years ago, GoldenGate was writing fan mail to Steve Aoki—now, he’s opening for him

Junior Kyle Serota—aka GoldenGate—is living his childhood dreams one remix at a time. 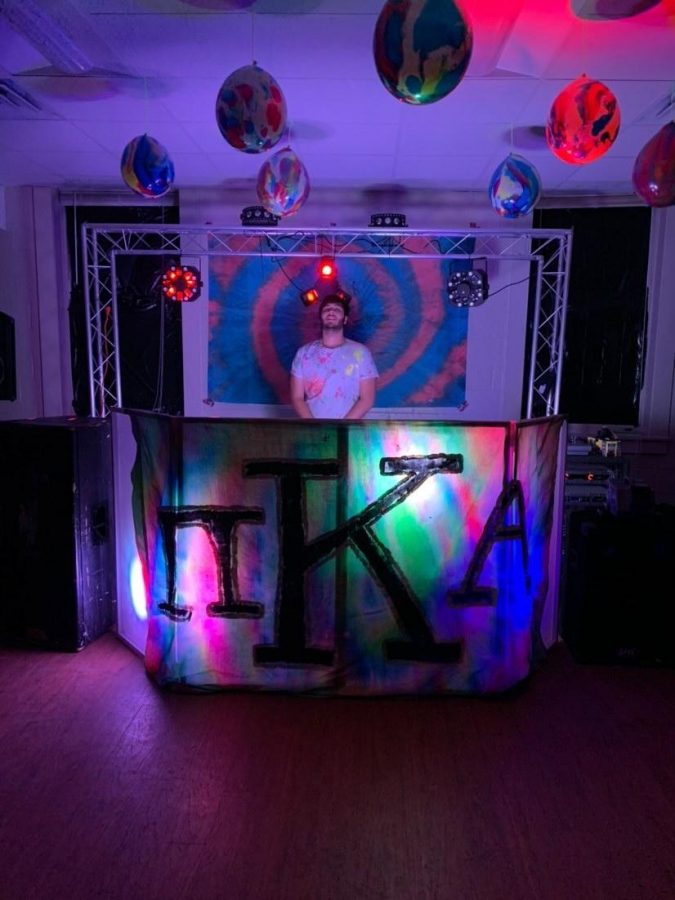 Serota DJ's at many of his Pi Kappa Alpha fraternity parties.

When Kyle Serota (‘23) was in seventh grade, one of his teachers happened to be childhood friends with the legendary DJ-slash-producer Steve Aoki. At the time, Serota had just been getting into a musical niche consisting of techno, EDM and electronica acts, and the constant intake of such content inspired him to create his own. He was already an amateur DJ stumbling into his own image, slowly learning the ins and outs of production via Youtube videos and online forums.

One day, Serota asked his teacher to forward a letter to Aoki, along with three of his best homemade tracks. (Serota now admits that the songs were terrible.)

“Dear Mr. Aoki,” Serota said in the letter, “My name is Kyle Serota. I am a dance music producer and a musician. I go by the name of ‘Rattrap,’ and I am 14. […] When I was in fifth grade, I discovered dance music through your music alongside groups like Swedish House Mafia and Knife Party. I became obsessed with electronic music which led me to start writing it. I work everyday making original music and remixes. I spend hours on my computer in my room making music with Ableton and I would love it if you could listen to some of it.”

Today, if you Google the term “Rattrap” you’ll get either the household rodent guillotine or the lesser-known “Transformers” character. If you Google “GoldenGate,” however—the newly-decided stage name Serota will be performing with from here on out—chances are, specifically if you narrow your search to include the date Oct. 24, that you may find information about an upstart DJ who just gave Steve Aoki a tough act to follow.

Before Serota was slated to open for his idol at a sold out show in downtown Nashville, he was begging his middle school principal to give him an opportunity.

“At a young age, when I got started DJing, I was literally going up to the principal of my middle school and saying ‘Hey, let me DJ something,’” Serota said. “And so eventually, my principal literally gave me a shot, DJing this dance for everybody.”

DJing the seventh grade dance—his first big-gig—did not come without roadblocks. At some point in our interview, we shared a laugh about a viral YouTube video in which a student guitarist completely messes up the Star Spangled Banner in front of a gym packed with peers. As much as it’s a funny prospect to laugh at now, this wasn’t too far off from what happened in his case: his computer crashed midway through the set.

“That kind of threw me off, but overall, I thought it was a great experience,” Serota said, with a chuckle. “By the end of it I really got people going, and that was kind of the moment where I was like ‘okay, I feel like I can really do this.’”

Such resilience, and the ability to draw something from nothing, have been necessary additions to Serota’s already-fearless approach over the years. DJing, for one, is an industry that seems to require just as much skill as pure luck. The fact that he’s opening for Steve Aoki in a month doesn’t mean that it’s been smooth sailing for the entire journey—and even when the challenges haven’t been relatively obvious, his success still required a go-getter grit that pushed beyond all inhibition.

When Serota was deciding on his next step as a high school senior, for instance, he was forced to confront a lifelong conflict between his interests in music and political science.

“The biggest thing for me when I was applying to colleges was deciding: ‘Well is this something really serious—because at that point, I didn’t really have a job in high school other than DJing—or do I want to try to get a ‘real degree’ and then do music on the side?”

He wound up committing to Vanderbilt (if you couldn’t tell by now) instead of pursuing a school strictly dedicated to music, and there was a desperate desire to not let his artistic side die. In his first year, he joined the Pi Kappa Alpha fraternity, where he was able to foster a musical community.

“I met a bunch of guys there who also DJed and did music, so that’s how I kind of connected with them,” Serota said.

As a first-year joining a fraternity full of people he didn’t know, he had every reason to be intimidated when an upperclassman challenged him to show his stuff on the boards. However, he rose to the spotlight, soon building a niche reputation on campus by playing tailgate parties and social gatherings.

But the most significant musical development thus far would come years after his Vanderbilt debut.

“This summer, I started working for this tech startup in Nashville called Yat,” Serota  said, “and they wanted me to come on as a music producer.”

Although Serota’s music was then beginning to take a backseat to his studies, he got a call from an old family friend who remembered that he was interested in production, and wanted him to help curate Yak’s own signature sound.

Over the summer, Serota lived in an apartment in Nashville, built a studio setup and produced music for the company. He estimates that he applied to nearly 40 internships in the political science field—without a single interview. Music was what worked.

“I was like, if this is my passion, if this is what I want to do, and this is really the only way I’m making money, maybe I should just do this,” Serota said.

One day, Serota got an Instagram DM from a Nashville promoter who introduced him to a newly-founded promotion agency called Blank Canvas. He got involved on an advertising level, putting shows covered by the agency on his Instagram stories and hanging up posters around campus. After doing this for some time, he sent the promoter some of his new music and asked to be considered if an opener was ever needed. The answer was a vehement “yeah dude”—which, understandably, registered to Serota as a kind way of being brushed off.

A little while later, though, while Serota was in class, his phone rang. He couldn’t answer it for obvious reasons (for the record: The Vanderbilt Hustler does not endorse nor encourage taking personal calls during lectures), but when he checked his phone afterwards, there was a text from the promoter. He was opening for Steve Aoki in a month.

“It would truly be an honor if you could listen to some of my work,” Serota said in his letter to Aoki several years ago. “I have been writing music since I was 11 and it is a dream of mine to become a professional musician and producer. I really hope that you enjoy the music.”

In a matter of weeks, dreams will become reality.