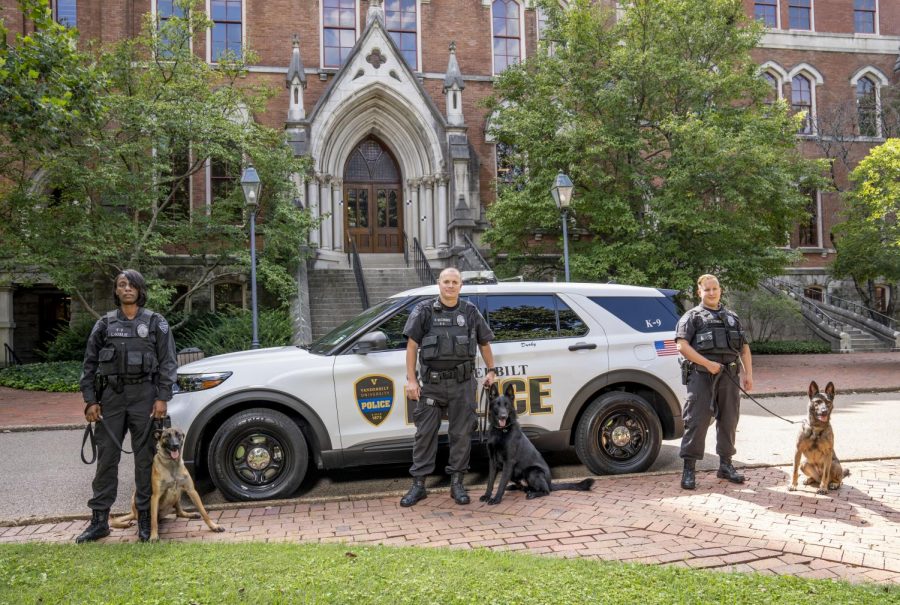 Several years ago, the Vanderbilt Medical Center put in a request for new drug detection canines to assist with hospital operations and combating the opioid epidemic. However, the process of finding, training, certifying and adopting these dogs involves complicated legal logistics that can often take about two years. Even once the unit knew which dogs they wanted to hire, the trainees had to come of age and then officially receive their police dog certification.

At long last, however, three new dogs are now joining the Vanderbilt University Police Department (VUPD) K9 Unit after graduating from a United States Police Canine Association-sanctioned training course in June. I spoke with Officer Jason Bates, who leads the VUPD K9 unit, to find out more about the new team members.

The VUPD K9 unit divides their team up according to responsibilities needed across campus. Three are assigned to “university central,” or main campus, performing cursory sweeps and inspecting suspicious packages and vehicles. Next, Officer Jack and Officer Levi—the two dogs students probably encounter most often—make up the community team. These two interact with the student body by attending student events and making efforts to get to know the community. Lastly, the three new dogs will join the VUMC operations team—currently a team of one—so they can assist with medical center sweeps.

Trixie, the first of the new hires, is a two-year-old Belgian Malinois born locally in Portland, Tennessee. She’s super energetic and loves to play fetch and learn tricks, but Officer Bates said she’s cleverly destructive and probably too smart for her own good. She works with Sergeant Lakosha Goodloe.

The second, Durby, is a male German Shepherd imported from the Netherlands.

“Most German Shepherds that are used in police and military operations are imported from Europe,” Bates said. “German shepherds from the U.S. have a bad hereditary condition of hip dysplasia, more prevalent here than over in Europe.”

Hip dysplasia can be quite harmful to dogs working in these fields due to all the physical activity involved, so European breeders conduct specialized X-rays on the dogs’ hips before exporting them. Luckily, this means that the breeders prescreened Durby’s hips and determined him ready for duty.

Officer Bates said Durby likes to stand up to give his handler hugs, and he also enjoys long walks around the campus and going to work in the morning (could not be us, Durby). He works with Sergeant Donald McCormick.

Last but not least, we have Akali, a two-year-old German Shepherd who has now been through two training sessions, as she had a previous handler. Compared to Trixie and Durby, she’s more laidback and gentle, despite her meticulous work ethic. She loves visiting people in the medical center and playing with her Kong ball, and she works with Sergeant Robert Stanley.

These three new K9 officers, in addition to the one already stationed at the VUMC, aim to provide as much coverage during peak hours as the hospital requires. While campus interaction with these specific dogs will be limited, the two community dogs are always available for student interaction.

In fact, Officer Bates said that demonstrations from any K9 team are available to anyone who requests one—so if you’re interested in a central campus demonstration from the explosive dog team or just want to hear more about the program and training, Officer Bates and his dog handlers are happy to oblige. Furthermore, the community dogs, Jack and Levi, can be requested to attend any student event and often appear around campus to bond with the Vanderbilt community.

Check out the VUPD K9 unit’s revamped website to learn more about the dogs or request a demonstration.