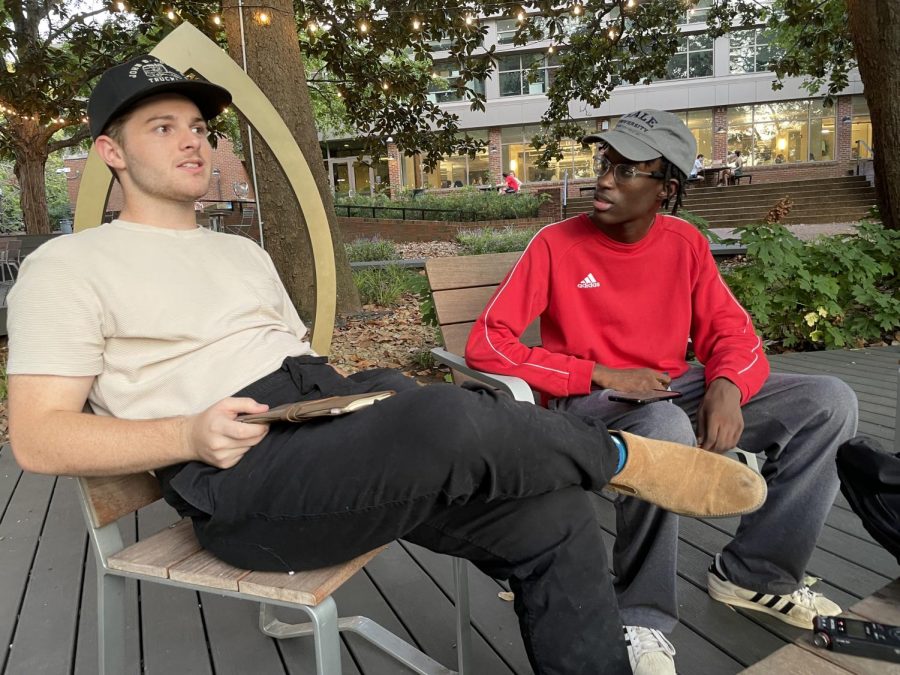 When musician Clayton Brown was growing up, his mother often grew upset at the lack of proper storytelling their home in the South was afforded in major publications. Her tenacity was something that invigorated Brown’s family and, as a result, taking control of one’s story became a common household theme throughout his childhood. He was raised in the art of commanding your narrative no matter what, and there was no barrier that could keep his family from expressing themselves.

Brown himself boasts a similar go-getter attitude today. Right now, for instance, he’s fostering a fruitful creative relationship with Judah & the Lion—a dream that was born when he was just 14 years old and attended a concert of theirs up close, immediately altering his goals for a long-term career.

“A really good analogy would be: ‘if you ever want to make somebody hungry, just eat in front of them,’” Brown said one recent evening, beneath the fairy lights of Rand Hall. “I was like ‘Holy shit, I know what I want to do. There’s no plan B. I want to be creative. That’s it.’”

Brown was involved with music even before he decided to make a career out of it, with a passion that landed him at the dinner table with Judah Akers and on the radars of the directors of “Euphoria.” This year, he’s finally taking his first official step towards a career in the industry by way of a seven-song debut EP, tentatively titled “Trepidatiously Uncaged,” that he plans to release by December. Impressively, he has already garnered quite the presence within both local and international music scenes; at the time of our interview, Brown was less than one week away from embarking on tour with Dude Perfect.

You’d never guess any of this at first glance. Walking past hordes of chatty students filing out of Rand Hall, Brown, sporting a T-shirt, loose black slacks and a snapback cap, blended right in. We wouldn’t have noticed him if he hadn’t waved at us. Despite the fact he’s connected with Judah & The Lion and Dude Perfect, Brown was just as interested in my story as I was in his.

“I’m a collector of stories. I’m a sucker for stories,” Brown said. “So, my favorite question to ask is: ‘What’s your story?’ A lot of times, I find myself writing about encounters that other people have. And it seems more true to me, writing about other people’s experiences, when I may not have had them. Putting their words on a page when they possibly can’t. It’s so beautiful. It’s so pure.”

One such story Brown has grown enamored with lately is that of Hatton Smith, a friend of his who founded a rum brand called Campesino Rum in 2019. The interesting thing about Smith’s story, Brown said, is that he once decided to venture into the remote woods, where he survived over an extended period of time with just a water bottle (“to keep your ass alive”), a hammock (“to give you a place to stay”) and a Bible (“just in case you’re dying—something to hold on to”).

Besides the fact that it’s just an awesome story, Brown also holds Hatton’s tale close because it epitomizes an ambition he aspires to. Brown admits that he’s got a long way to go, but rather than let the road come to him, he puts his future plans into categories: short-term dreams and “immortal” ones. One short-term dream he has, for instance, is to “make hair sexy again”—which, by the look of the mane tucked beneath his baseball cap, he may be well on his way to checking off.

When we asked for a rundown of some of his long-term aspirations, the first thing he said came with zero hesitation: “I want to be a great father.”

“I didn’t have the best relationship with my dad,” Brown said. “I just had the most intense conversation with him, around what it should look like, what it does look like, what we want it to look like. And a lot of the stuff he said, I knew … but I think that at this point in our relationship, it’s good for him to know that I’m willing to listen.”

Brown’s conversation with his father touched a lot on listening—not just to words, but to music.

“I was just like ‘Hey, I can’t keep having this empty seat in my life,’” Brown said. “‘The front row seat [at Brown’s concerts], it’s empty, always. If you don’t want to be there, let me know and we can navigate that.’”

Brown’s relationship with his father has since undergone a beautiful rekindling. And as his debut solo project nears release, it’s relationships like these that are going to carry the largest weight.  Brown is a people person: he’ll take you aback by how interested he is in your story, he’ll eagerly chat about how many new friends he made on some random evening and he’ll do a better job of interviewing you than you do of interviewing him. On this EP, however, the most important relationship is going to be the one he has with himself.

“What’s your story?” isn’t the only question that Brown likes to ask. There’s one more he keeps at his disposal if conversations come down to it: “What do you want your best friend to tell your kids at your funeral?” As we walked over the pedestrian bridge over 21st Street, I threw the question back at him.

“He loved bigger than anybody you could possibly think of,” he said. “He lived. He truly lived. He chased what he dreamed and he made it a reality. He never stopped.”