Vanderbilt’s young roster will look for new leadership and consistency in the wake of losing Christina Rosca, Emma Kurtz and Amanda Meyer. 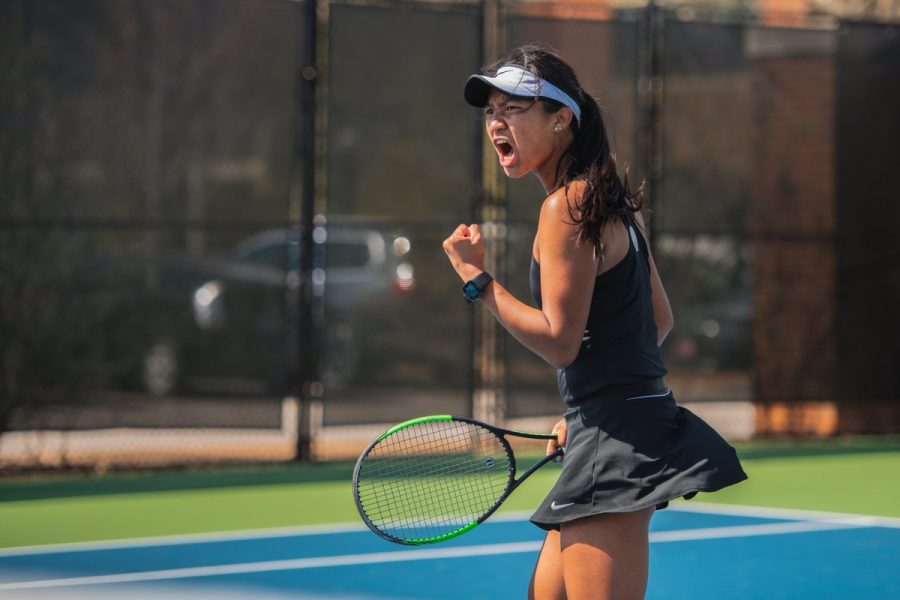 On Friday, Sept. 17, the Vanderbilt women’s tennis team will begin the 2021-22 season with the Furman Fall Classic in Greenville, South Carolina. Vanderbilt will aim to improve their consistency, an aspect they lacked last season.

Vanderbilt began the 2021 season on a tear, winning their first eight matches. An exhilarating upset over No. 9 Georgia Tech gave the Commodores an 8-0 record and a top-ten ranking. Vanderbilt continued to excel as the season wore on, winning four of their next six games. The No. 14 Commodores were 12-2 and deserved to be a top-15 team with the way they battled in every match.

But after a come-from-behind 4-3 thriller over Kentucky, the team’s momentum dissolved. The Commodores went on to lose seven of their last eight regular-season matches. Despite this inconsistency, they played well enough to secure a convincing victory over Ball State in the first round of the 64-team NCAA tournament. Unfortunately, the Commodores were knocked out by Ohio State in the second round, ending the season ranked No. 29.

“Every team is going to be held to their standards,” head coach Aleke Tsoubanos said. “Last year was last year and we are looking forward to seeing what this team can do this year.”

This season, Vanderbilt will learn to play without former fifth-year senior Christina Rosca. Rosca is irreplaceable; during her five years on West End, she was a two-time All-American, had the third-most singles wins in Vanderbilt history, was the fifth-ever Commodore to reach the Elite Eight in the NCAA singles tournament and was the 2021 Arthur Ashe Leadership & Sportsmanship Award honoree.

“You can’t replace Christina Rosca,” Tsoubanos said. “She was an incredible student-athlete at her time at Vanderbilt. Chris was a great leader and I’m getting nostalgic just thinking about her because she was such a good person and a great competitor. We will certainly miss that.”

Vanderbilt also loses Emma Kurtz and Amanda Meyer. Kurtz left Vanderbilt with an impressive 186-131 record and an outstanding impact in the community. Kurtz embodied what it meant to be a student-athlete, winning three SEC Academic Honor Roll awards and earning a spot on the SEC Community Service Team in consecutive seasons. Meyer will also be missed, as she leaves Vanderbilt with a 118-78 record. In 2018, Meyer was No. 26 in the NCAA singles category and all-SEC.

Despite losing these three Vanderbilt legends, there is plenty of hope for the future on West End. This season, the Commodores add freshmen Célia-Belle Mohr and Amy Stevens. These young student-athletes, blended with Vanderbilt’s core—Marcella Cruz, Dasha Kourkina, Anessa Lee, Anna Ross and Holly Staff—will prove that this team is a force to be reckoned with. In addition, Tsoubanos and the Commodores add graduate students MarryAnn Rompf and Yufei Long.

The Commodores enter the season with Ross and Staff as the No. 9 doubles team in the country. Another Commodore duo—Cruz and Rompf—enter the season at No. 48 in the preseason rankings. Cruz was a member of the SEC All-Newcomer team last season, highlighting sophomores that had their freshman year cut short due to the COVID-19 pandemic.

Last season, youngster Lee played phenomenally, and looks to add more wins to her resumé. She was 18-8 in singles and earned a spot on the 2021 SEC All-Freshman team. She also was 17-12 in doubles and her 35 wins tied with Rosca for the most on the team.

“We’re a really young team,” Tsoubanos said. “We’re looking for everyone to contribute in any way they can and give everybody as many opportunities to compete. It will be kind of fun to see some new doubles combinations this fall.”

The replenished Commodore squad will face its first test of competition at the Furman Fall Classic Sept. 17-19.

“The most important thing this weekend is to see where the team is in terms of competing really hard,” Tsoubanos said. “This will be a really good test to see where we are as a group and what we need to work on the most as the fall unfolds.”

From there, the Commodores will have three weeks competition-free until they host the June Stewart Invitational from Oct. 8-10. The tournament honors June Stewart, the first woman to serve as an assistant SID for men’s sports at Vanderbilt. She was also part of the NCAA Women’s Basketball Committee from 1990-96.