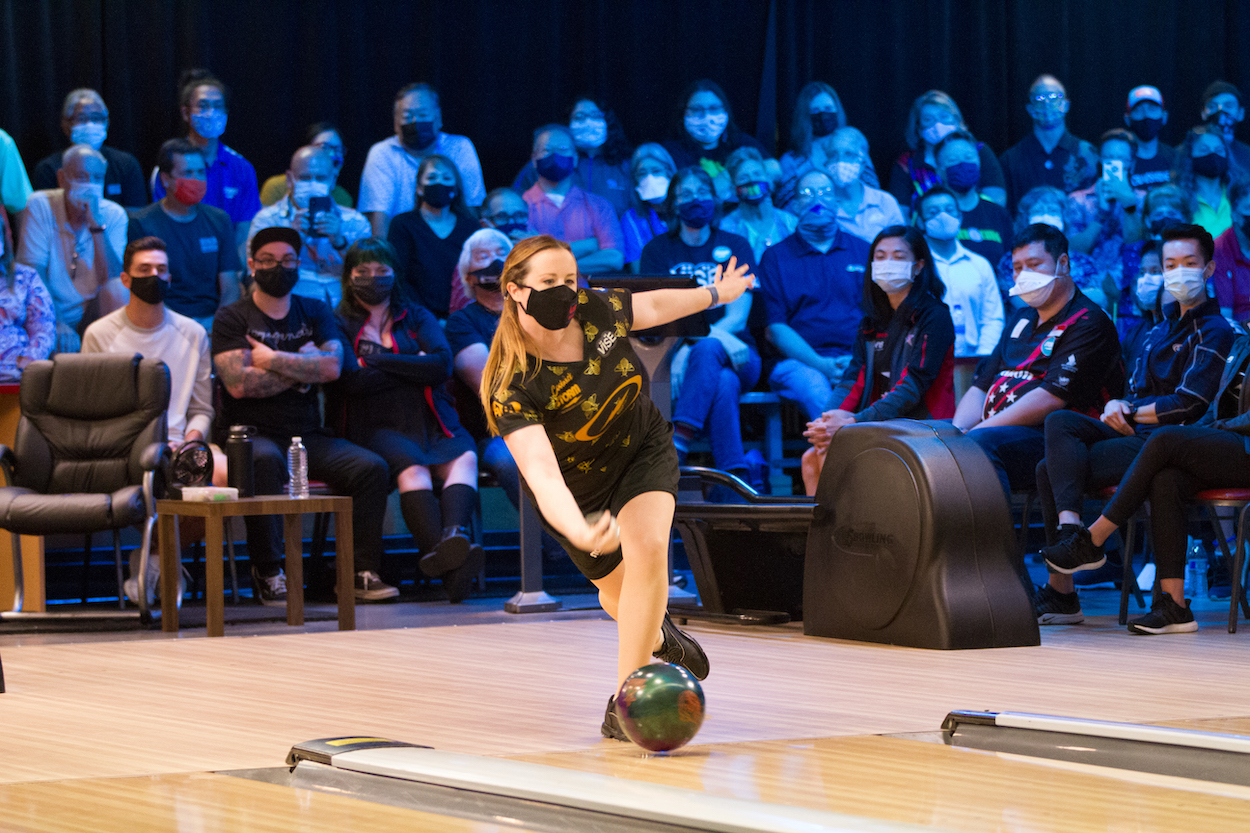 ‘I bowled 30 years for that one moment’: Associate women’s bowling coach Josie Barnes is a U.S. Open champion

“When I went into this week, I really had no expectations of bowling as well as I did. But I did tell myself I wanted to leave [the U.S. Open] feeling like I could be respected.”

Vanderbilt associate women’s bowling coach Josie Barnes not only left the 2021 women’s U.S. Open appearing more than respectable, but she did so with her first ever major championship trophy as well.

“[I wanted to show that] I’m a competitive bowler and have people respect what I do. I fight until the end; this is how I’m going to leave the season,” Barnes explained. “I think that shift into a very simplistic mindset really helped me through that week.”

In a heated battle with Singapore’s Cherie Tan—a professional bowler by trade, sponsored by her home nation to compete—Barnes claimed a U.S. Open championship in dramatic fashion on Aug. 31. The former two-time NCAA bowler of the year at Vanderbilt and current associate coach under John Williamson regarded her 2021 season as one of her worst on tour. Barnes’ best previous major championship finish came all the way back in 2012 at the USBC Queens; never for a second did it dawn on her that her life might change on the last day of August, 2021.

“Prior to this week, if you had asked me to rate my season, I would say it was the worst one I have had on tour,” Barnes said. “So you have to be patient, and you have to be kind to yourself and understand that sometimes it takes a while.”

A field of 71 competitors was quickly cut down in match-play format before Barnes advanced to the title match against Tan and claimed victory by a narrow, four-pin margin: 198-194 in the ten-frame match.

Things looked bleak for Barnes towards the middle of the match, but a wise ball-switch after frame six yielded consecutive strikes to push her ahead of Tan. In her final frame, Barnes needed a pair of strikes to take home the championship outright. However, she was only able to squeak out a single spare and left the door open for Tan—a former PWBA Players Champion. Tan needed two strikes to overtake the Vanderbilt alum and win the tournament.

“I have watched [Cherie Tan] for years. So I know who she is, I know how she competes. And to me, she is one of those competitors that you can never count out,” Barnes said. “In my opinion, she is one of the top five or top ten players in the world.”

In typical fashion, the lefty nailed the first strike, a clean ball between the two front left pins. She stepped up for her second throw—a must-have strike—and Barnes prepared for the worst.

“When she got up in the tenth [frame] and got the first [strike], I said, ‘Well, Josie, I think your time’s up right now.’ I thought she was going to get that one because that’s just who she is. She’s got ice in her veins in the best way possible,” Barnes said. “So it really didn’t hit me that she didn’t get the second one. I couldn’t believe it.”

“The beautiful thing about bowling is there’s really no defense. So it didn’t really matter what she did, because I had to take care of what I was doing. So that that was what my focus was on [during the match],” Barnes said. “I’ve been bowling for 30 years. So I bowled 30 years for that one moment.”

Barnes returned to West End—where she is a role model for the women’s bowling team and a new mother away from the lanes—with $100,000 and a U.S. Open championship. The Vanderbilt Athletics Hall of Fame member says that she is in the unique and fortunate position to be able to compete professionally while still serving as a coach and she is eager to now demonstrate to her team that anything is possible with patience and hard work.

“The biggest thing that I hope to give to my team is that it is a balancing act and that you can do anything you want. But also understand there are going to be some moments during which you have to ask for help,” Barnes said. “I hope they feel like they can depend on me to be one of those [supportive] people for them. Big dreams are important to have, but also understanding that they take time to get there.”

When arriving back on campus, she was greeted warmly, with decorations scattering her office, banners from Vanderbilt’s soccer coaches and a warm embrace from athletic director Candice Storey Lee.

“For her to have come up through our program to now be serving as an associate head coach and still be at the top of her game as a professional athlete—its incredible,” Lee said. “It was beautiful to see in our department, coaches from other sports, athletes from other sports, staff, we are just really excited for her.”

After 30 years of relentless work, dedication to her craft and support from Vanderbilt, Barnes is at the top of her sport.

“I think that one of the things that I’m still struggling to conceptualize is that the U.S Open is the biggest event that you can bowl in,” Barnes said. “If you ask anyone what major title they want to win, they’re going to tell you the U.S. Open.”