Film Room: Where the Vanderbilt Offense Went Wrong in Week One

Vanderbilt managed just 3 points against an FCS opponent last Saturday night, despite returning 9 of 11 starters on offense from the 2020 team. 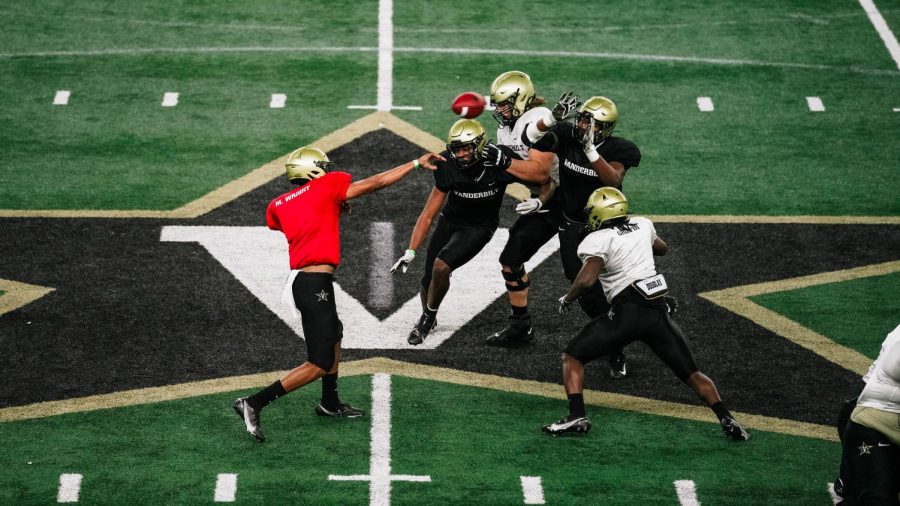 Among the myriad of surprises from Saturday night’s stunning loss to East Tennessee State, perhaps most dumbfounding was the play of the Vanderbilt offense. The Commodore attack, led by second-year starter Ken Seals, mustered just three points against the ETSU Buccaneers—who went 4-2 in the FCS’ Southland Conference in the spring of 2020—and generally looked lackluster all evening.

Vanderbilt’s offense was by no means dominant in 2020—they ranked 13th out of 14 SEC teams in average yards per game—but it was still a group that had its moments throughout last season. Over a four-week stretch, the then-freshman Seals threw for over 300 yards three times and led respectable offensive efforts against Mississippi State, Kentucky and Florida.

There was excitement for the offense coming into 2021, after nine of 11 starters from the 2020 group opted to return, including a solid pass catching unit around Seals. First-year head coach Clark Lea brought in David Raih, an exciting hire from the Arizona Cardinals, to attempt to reboot and revitalize the Commodore offense. Throw in offseason excitement about supposed emerging contributors like Will Sheppard, Re’Mahn Davis and Quincy Skinner Jr. and it seemed as though the Commodore offense—at least the passing game—could be improved in 2021.

Three points and just 325 yards of total offense, most of which came in garbage time after the Commodores had (literally) punted away the game.

Yes, there were concerns about the offensive line coming into the season, but the Commodores had the same issues last year and at least looked formidable against SEC opponents. ETSU is nowhere near that level of competition—look no further than former offensive coordinator Gerry Gdowski’s putrid offense putting up 38 points on this same Buccaneers team in 2019.

So what’s to blame? Were the late defections of veterans such as Ja’Veon Marlow and Drew Birchmeier more impactful than originally thought? Is Vanderbilt missing a Keyon-Henry Brooks-type burner in the running back room? Is this due in some part to Raih’s demotion at the beginning of preseason? The answer is probably a combination of all of the above, but let’s check some tape to see if there’s any more we can glean at least in the immediate future.
Making the More Difficult Throw
One emerging commonality from film review was that Seals (and Mike Wright to an extent) was consistently making life more difficult than it needed to be. Gone were the quick checkdowns and seam routes to Ben Bresnahan and Cam Johnson that were so effective for him in 2020. Instead, the sophomore quarterback was locking in on reads, escaping the pocket before need be and most importantly, looking to make the big play instead of the smart play.

In the video above, it’s easy to see some of the unforced errors that plagued the Vanderbilt passing offense and led to Seals’ general ineffectiveness. But what’s puzzling is that the Azle, Texas, native didn’t seem to have these types of issues in his surprising freshman campaign. More than anything, Seals was known as a game-manager who opted to move the ball for quicker gains rather than big chunks. On Saturday, Seals looked like he had regressed from his 2020 self in terms of both decision making and comfort in the pocket. He often missed checkdowns to backs Re’mahn Davis and Patrick Smith and rarely looked over the middle to Bresnahan or Johnson.

And while Wright didn’t make the same types of errors, he still locked in on low-percentage fades to receivers as well. Was this by design and, if so, why? Slinging the pigskin around like Jay Cutler is the strength of neither of Vanderbilt’s two options at quarterback. Joey Lynch—who works directly with the quarterbacks and now calls plays as well—will need to improve big time in this regard come Saturday. Seals was actually able to find a rhythm towards the conclusion of the game, albeit in garbage time, hitting easier slants and curl routes to lead Vanderbilt down the field. He’ll need to utilize that decision-making process from the jump against the Rams of Colorado State.
Miscues in the Running Game
Another warning sign that jumped off the screen on tape was the number of miscues in the running game. First off, the Vanderbilt offensive line was getting significantly less push up front than expected, which hurt the overall rushing attack. But in reviewing film, this wasn’t necessarily the only issue.

In most of the above clips, the offensive line is actually providing decent holes—rather, transfer running back Re’mahn Davis was having trouble identifying and running through those holes. Davis certainly gets some slack as running back is a position that is harder to emulate in preseason practice, but the lack of vision has to be acknowledged. Play calling-wise, it was an unbalanced, single-pronged attack that didn’t even look to third-string tailback Rocko Griffin at all. Overall, Vanderbilt tried to implement a series of inside zone reads and stretch plays that put little pressure on the Buccaneer defense and resulted in minimal success.

Further miscues included some bad penalties that took away big plays for Vanderbilt—notably a first-down run from Wright and a touchdown to Chris Pierce on a RPO. The Commodores seemingly never got their stretch run attack working and part of that is likely on Wright as well, who has been better in terms of decision-making on option plays.

Vanderbilt obviously has a number of things to patch up offensively before facing Colorado State this weekend. However, the film was encouraging in the sense that there actually were some first downs and big plays to be had—the execution will just need to be better.

Despite nursing a shoulder injury, I think Mike Wright should still get some touches on Saturday as he was more effective at getting the Commodores down the field and opening up options in the run game. The only unique play that stood out was a triple option between Wright, freshman Patrick Smith and wideout Cam Johnson in which Wright faked a handoff then dumped a quick pass off to Johnson. Johnson was already moving—he came in motion on the play—and caught the pass with space to work. Wright was able to make a simple decision and easy throw that picked up a chunk gain.

Vanderbilt will be without Bresnahan in the contest due to injury, but if Wright can focus on making simple throws and Lynch can make those decisions easy to recognize for him, then the Commodores will be better suited offensively in their second attempt in 2021. Maybe they’ll even score a touchdown.