Vanderbilt soccer adds to campus melancholy, loses to No. 23 Pepperdine 4-1

With SEC play approaching, the Commodores will need to correct key mistakes moving forward after today’s tough loss to the Pepperdine Waves. 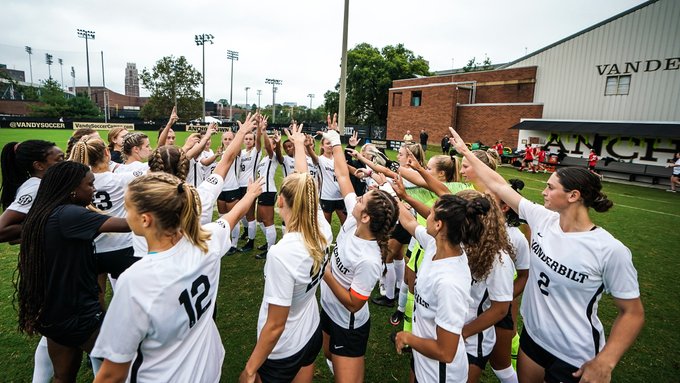 Vanderbilt soccer dropped its third game of the season on a rainy Sunday in Nashville. (Vanderbilt Athletics).

Today’s grey, rainy Sunday weather matched the attitude on campus for Vanderbilt following football’s 23-3 loss to East Tennessee State University. Soccer couldn’t pull the school out of its misery, as the team lost 4-1 to No. 23 Pepperdine, who left the state 2-0 on their Nashville road trip and improved to 5-1 overall.

The match started in the worst way possible for the Commodores. Just a minute and a half in, Pepperdine played a chipped ball into the top of the 18-yard box. The ball actually missed its intended mark, but found redshirt senior Joelle Anderson, who was making a secondary run in behind the target forward. With Maya Antoine following the original run, Anderson was left alone with keeper Kate Devine, who was unable to make the stop. With the finish, the Waves took the early 1-0 lead.

Just over 10 minutes later, Anderson tested Devine again. With some gritty play from the wing, she was able to push it past the right side of the Commodore defense and found herself with another one-on-one opportunity against the keeper. This time, the Waves came up short as Devine deflected the ball off her knee and over the net. This was not the first and would not be the last time Devine was called into action today.

Over the next 20 minutes, Vanderbilt started to put pressure on the Pepperdine defense. Shots were falling just wide, and it felt like a breakthrough was coming soon for the Black and Gold. Just as the tide of the game started to shift, Anderson got the ball around the midline and exploited open space on the left side behind Commodore wingback Ava Hetzel and beside the Vanderbilt back three. She took the ball all the way to the top of the 18-yard box and fired a shot that went just wide with the help of Devine.

However, Vanderbilt fans were only able to take a short sigh of relief, as the resulting corner ended up in the back of the net. It was Kelsey Hill who found space in the box and expertly sent a glancing header across the goal and into the left side netting. This pushed the Waves’ lead to two.

Still, Vanderbilt continued to create chances. In the waning minutes of the first half, Rachel Deresky was given a through ball into the box and even managed to sneak it past Pepperdine keeper Zoe Clevely. The shot got the crowd to its feet, as it seemed destined to reduce the Waves’ lead, but the ball trickled less than a yard wide of the target and rolled out for an opposing goal kick. This was the story of the day for the Commodores.

The beginning of the second half was a case of déjà vu for Vanderbilt. Just a minute and a half into the period, Pepperdine earned a corner which was played to the back post and deflected off a few bodies before it crept past Devine and into the net. Anderson and Carlee Giammona were credited with assists, while Tori Waldeck got her first score of the game.

Just three minutes later, Waldeck penciled her name on the score sheet again. This goal was scored in much different fashion though, as Waldeck received the ball right outside the 18, skillfully turned around and finally unleashed a powerful shot over the head of Devine. The score effectively put the game away and cut Devine’s day short. In the 83rd minute, after conceding four goals, the keeper was substituted in favor of junior keeper Sophie Guilmette.

“When you get four balls past you, that’s something that needs to be looked at,” head coach Darren Ambrose said. “We’ve said all along Sophie was knocking on the door, and at the moment, maybe that’s something we have to look at more closely—I want to watch the video before I make any final decisions.”

The last 40 minutes of the match proved mostly similar to the first 50 for the Commodores. They had a multitude of chances and had a hard time putting them away until they earned a penalty kick in the 85th minute. Senior captain Ella Shamburger calmly stepped up to the mark and slotted the ball to the right of the keeper’s outstretched arms, notching her first career goal. The achievement was significant but not enough to change the outcome of the game for Vanderbilt. The score finished 4-1.

“Individual mistakes all over the field [was the problem]. And at some point, these young ladies are going to have to start taking some responsibility for their individual mistakes,” Ambrose said. “In key moments of the game, we’re just not responding well. We have too many mistakes that are happening in each 18-yard box and too many instances where individuals are making decisions that really aren’t correct.”

For Ambrose and his team, this loss was a tough pill to swallow. It should be stated that Pepperdine keeper Clevely played a good game with five saves in total, and the team as a whole has been consistently strong over the past few years, beating Stanford in their 2019 championship year and taking Santa Clara to overtime in their 2020 championship year. However, a 4-1 defeat against any team is frustrating for Ambrose.

“The team’s going to have to make a choice. You’re either going to show up and fight and compete and show some heart and some passion or you’re gonna have a long season,” Ambrose said. “We want a response. And we’ll see how much they want to respond, and what they want to reply [for] what this really means to them to wear this jersey and represent this program.”

With an SEC stretch of games approaching, Vanderbilt will need to figure out their problems quickly. If they want to challenge for any kind of title, their play will need to improve rapidly. This trend can start this Thursday, Sept. 9, when they take on Nashville-based Lipscomb University at 6 p.m. CDT.