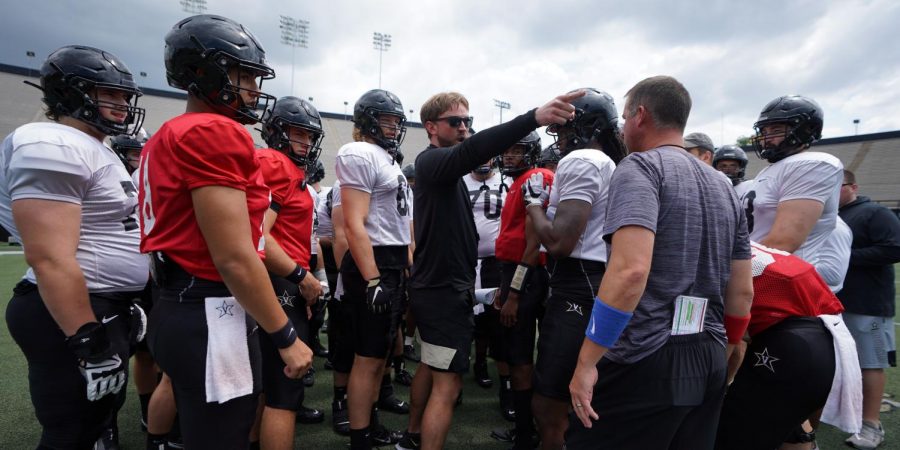 Vanderbilt football is just around the corner as first-year head coach Clark Lea and “Team 1” are set to hit the field Saturday at 7:00 PM CDT against FCS opponent East Tennessee State. Coming off a winless 2020 SEC campaign, there are lots of storylines for Lea and company heading into the season opener.

The Buccaneers of East Tennessee State went 4-2 in a shortened, conference-only 2020 season. The Commodores took care of ETSU in a 38-0 win the last time these two schools faced off in 2019, and Vanderbilt is favored to dominate the matchup once again, but there are plenty of questions that will be answered in the Commodores first game action in nine months. Luckily, Sports Editor Justin Hershey and Deputy Sports Editor Bryce Smith answer all your questions before Saturday’s primetime kickoff in the second edition of The Hustler Mailbag.
What does a successful first season for Clark Lea look like this year?
Bryce Smith, deputy sports editor: Honestly, general competitiveness. Throughout my tenure at Vanderbilt (2019-present), the Commodores have amassed a record of 3-18 and just three of those losses have even been within two scores. So if Clark Lea has Vanderbilt prepared to play week in and week out and the team hangs in there in a couple of SEC matchups in Year 1, I’ll be giddy. I wouldn’t call Lea’s tenure thus far anything but a success so I’m confident he keeps that going once the actual games begin. You?

Justin Hershey, sports editor: Competitiveness and heart are two things I completely agree with. Lea has spoken time and time again about winning every blade of grass, playing every snap like it’s your last and being the most physically conditioned team in the country. I want to see 40-point blowout losses turn into two-score games—no matter if Vanderbilt falls far behind early. Wins aren’t going to come automatically and this team has a fair amount of growth to still go through before being a legitimate, multiple-SEC-wins threat. But with their best incoming recruiting class in a number of years and a new culture, maybe multiple SEC victories aren’t too far down the road. Oh, also, anything less than 3-1 out of conference would be disappointing. Am I wrong there?

BS: I think that’s tricky. Everything kind of hinges on the Colorado State game in Week 2. It’s a game that Vanderbilt should win, but it’s also a dumbfounding road trip to the high altitude of Fort Collins, Colorado. It’s also this team’s first real test, assuming all goes to plan against ETSU. If Vanderbilt takes care of business against Colorado State, 3-1 in the non-conference games will be probable and 4-0 possible. That said, I feel more uneasy than confident heading into the matchup—so ask me again at halftime in Week 2.
What key differences have you observed between the new coaching staff and the old coaching staff?
JH: Well, there are a lot of answers to this one. I’m going to settle on one main theme: being unique. Lea entered this position and immediately shook up McGugin Center—which was purposeful. Nearly nothing he did—from assistant coach hirings to training camp initiatives—was cookie-cutter. And I think that’s just huge. At a school like Vanderbilt that has had three nine-win seasons in an over 100-year history, trying to run a traditional college football program is simply ill-advised. Things like bringing in Barton Simmons from 247Sports, initiating an earn-your-number campaign for players, designing new jerseys and bringing several Vanderbilt alumni onto his staff have just made this a really unique opportunity for recruits. From the looks of it, I think being unique has paid off thus far—at least, according to one of your latest articles, Bryce.

BS: Yeah, Clark Lea has certainly embraced the uniqueness of the Vanderbilt football program thus far, which is great to see. I’ll go in a bit of a different direction and say the biggest difference I’ve seen so far is overall organization and attention to detail. Everything that Lea has done—from the diction he uses to describe his team to the threading of the black and gold uniforms—has been purposeful thus far. And boy, is that a welcome change. We’ve been over Derek Mason’s struggles ad nauseam, but one glaring thing that there never seemed to be in his program was a coherent year-to-year, or even week-to-week plan. That was only exacerbated last year during the drama-filled 2020 COVID season. Lea has been extremely detail-oriented in every aspect of his job so far and I’m excited to see how that translates to the field. It’s one reason I’m a little more optimistic in Year 1 than I anticipated—hopefully Lea’s focus on details manifests in a disciplined, coherent football team that can shrink talent gaps against opponents.

JH: I think this is spot-on and honestly goes along with my point about uniqueness. One of the areas that left room to be desired under Mason was absolutely attention to detail. Mason—for all his flaws—brought incredible energy to press conferences, postgame interviews and the field. But Lea is really making this place his own with thoughtful mantras, outside-the-box thinking and obviously, aesthetics as well. Those are the sorts of things you can pitch to recruits. Energy is great, but a unique culture defined by attention to detail is tangible and more appealing.
Who is a breakout or sleeper candidate this year?
BS: While I considered sophomore wideout Will Sheppard after his huge spring, I’ll go with junior linebacker Anfernee Orji here. Orji arrived on West End as a top-500, fringe four-star recruit (247Sports) and contributed immediately, playing in nine games as a true freshman. Last season in a more regular role, Orji totaled led the team in tackles with 66 in nine games. He stamped a solid season with 13 tackles in the final contest against Tennessee. Clark Lea, the former defensive coordinator at Notre Dame, has been a known developer of talent throughout his career. Most recently, Lea coached 2021 NFL second-rounder Jeremiah Owusu-Koramoah, who starred at linebacker for the Fighting Irish. Orji is about two inches taller and 30 pounds heavier than Owusu-Koramoah, but Lea will be looking for him to bring a similar unifying presence to his defense. Thoughts, Justin?

JH: Orji is a great pick. Tackles leader from last year and from the looks of it, he has had a terrific offseason in the weight room. Most of the defense is going to hinge on him, but I’m going to turn to two other spots on the defense. First, I think Daevion Davis has a big year. When Lea announced that he would be taking the junior tackle to SEC Media Days, I was immediately intrigued. Although he has appeared in 19 games and totaled 32 tackles, I don’t think we have seen him take that next step. But with the departure of Dayo Odeyingbo and Andre Mintze—and the 53 tackles and 8.5 sacks they generated last season—the Commodores will need production and he’s going to bring it. My second choice is a more of a dark horse. I like junior Gabe Jeudy-Lally to have a solid year. He started flashing some potential late last season with an interception against Tennessee and captured the starting cornerback spot opposite Jaylen Mahoney in Vanderbilt’s first depth chart. He has solid size at 6’1” and a chance to really impact a group that is a question mark for this team. Someone has to step up in the secondary, right?

BS: Naming one of the two captains of the team as a sleeper is cheating, Justin. Kidding. Davieon Davis is going to anchor the Vanderbilt defense this year and defensive tackle is a great position to feel confident in heading into a season. Love the Jeudy-Lally pick too and I’m excited to see his position mate Jaylen Mahoney as well. Mahoney really stood out at times last year and, as you mentioned, Jeudy-Lally began to come on at the end of the year. I don’t know if this group will be a strength, but it certainly shouldn’t be as much of a weakness as it was in previous years when Derek Mason was cycling through ineffective jucos and transfers in the secondary.
When will Vanderbilt unveil the rest of the uniform set?
JH: First—I have no inside knowledge about more jerseys to come, but let’s hope there are because Lea hit a home run on his first go-around. Good riddance to the anchor. Good riddance to grey unis. So impressed that Lea immediately shook things up here and I personally love the designs. They are clean, bring back the “V” to the helmets and highlight the school’s actual colors. I’m a big fan of the black jerseys—10/10. Besides the gold lettering blending in a little to the white jerseys, I’m really impressed all around. Maybe we get an alternate set later in the year?

BS: Yup, the uniforms are a huge upgrade overall. I was a little disappointed to not see the “Star V” on the gold helmets, but the “Block V” has grown on me and the whole kit is about a million times better than what they’ve rolled out over the past two years. The team has been wearing black helmets during most of preseason practice, so I’m hoping for an alternate that includes those—with either a Star V or Block V—and a gold jersey that can be utilized during day games in the early fall to alleviate the hot Nashville temperatures. One more note I’ll add—the pants are an underrated upgrade. The last set of pants was incredibly boring, with just a gray anchor chain running down the side and only a white and black option. The clean, classic stripe look in three color options is enticing. Good job all around, Clark!