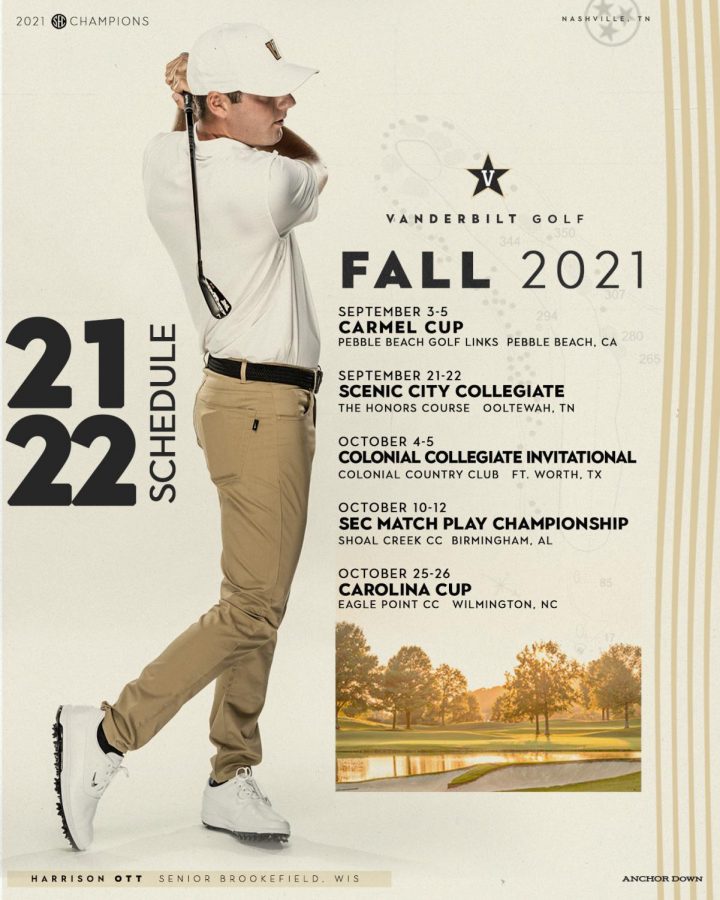 The Vanderbilt Commodores are a mere three days away from competing in their first tournament of the 2021-22 season. Just three months ago, the No. 11 Commodores reached the NCAA Championship for the seventh straight season but fell victim to the Oklahoma Sooners 4-1 in the quarterfinals. Before competing in the NCAA Championship, the Commodores claimed their second SEC Championship in program history. Vanderbilt will look to build off of that success from last year through a process of professionalism and dedication.

“The beginning of any climb or journey is always the most fun because it brings out the unknown,” head coach Scott Limbaugh told The Hustler. “We have a new team and I think we like the talent that we have, but it is really about what we do. I think the challenge now is having everyone understand what it takes to have a great team.”

In addition to an SEC Championship, the 2020-21 Commodores’ season was filled with great individual achievements. From William Moll earning Second Team All-American to six student-athletes making the spring SEC Academic Honor Roll, or to head coach Scott Limbaugh being named SEC Coach of the Year, Vanderbilt has much to be proud of going into the 2021-22 season.

The Vanderbilt roster looks to be even stronger this year, with everyone that played last year returning. In addition to the returners, two standout freshmen come to West End this fall. That duo of freshmen look to make an immediate impact.

“These freshmen are special,” senior Davenport said. “Mixing in these freshmen will be exciting to watch and I’m looking forward to forming this team throughout the season.”

Jackson Van Paris, a native of Pinehurst, North Carolina, has already made history by winning a match in the 2018 U.S. Amateur at 14 years old, making him the youngest player to achieve this feat since Bobby Jones in 1916. Since then, Van Paris has only improved and looks to make strong contributions to this stellar lineup.

The second half of the freshman duo is Gordon Sargent; the second-ranked golfer from the Class of 2021 and two-time Alabama State Amateur champion will come to West End with quite an impressive resume.

“These freshmen are both winners,” Limbaugh said. “Our job now—as coaches, and our leaders—is to help show them what makes good habits.”

After the addition of these tremendous freshmen, William Moll staying for a fifth year and the core of the Commodores remaining with the team, Vanderbilt ranks sixth in the preseason college golf polls.

“We’ve had more depth than we have likely ever had,” Limbaugh said. “Success creates complacency. A starving team is a good team, and I think that is what we are trying to form. These guys need to continue to be hungry to grow and to learn.”

The SEC-champion Commodores face an arduous set of opponents this fall. On Sept. 3, Vanderbilt will start the season with the three-day Carmel Cup in Pebble Beach, California. After this tournament, the Commodores will face off in the Scenic City Challenge (Sept. 21-22) and the Colonial Collegiate Cup (Oct. 4-5).

After the first three tournaments, the Commodores will travel to Birmingham, Alabama, to compete in the inaugural SEC Match Play Championship (Oct. 10-12). The fall season will conclude with the two-day Carolina Cup starting on Oct. 25.

“This new SEC Tournament opened my eyes,” Davenport said after being asked what tournament he is most excited for this season. “We won match play in the SEC Championships so I’m looking forward to competing in that format.”

The Commodores have a roster that has more depth than Coach Limbaugh can ever remember and star senior Davenport is the most excited he’s ever been to start a season. This roster has a lot of potential and the strength to earn plenty of accolades by the end of the season.

“I’m sure Coach Limbaugh will formulate a genius message that we live by for the next year,” Davenport said before the first practice of the season. “We’re as close a family as any sport at Vanderbilt.”