Vanderbilt soccer puts up a fight, but loses to No. 5 Duke 2-0

This Sunday, Vanderbilt soccer picked up its second loss of the season, this time falling to No. 5 Duke 2-0 at home. 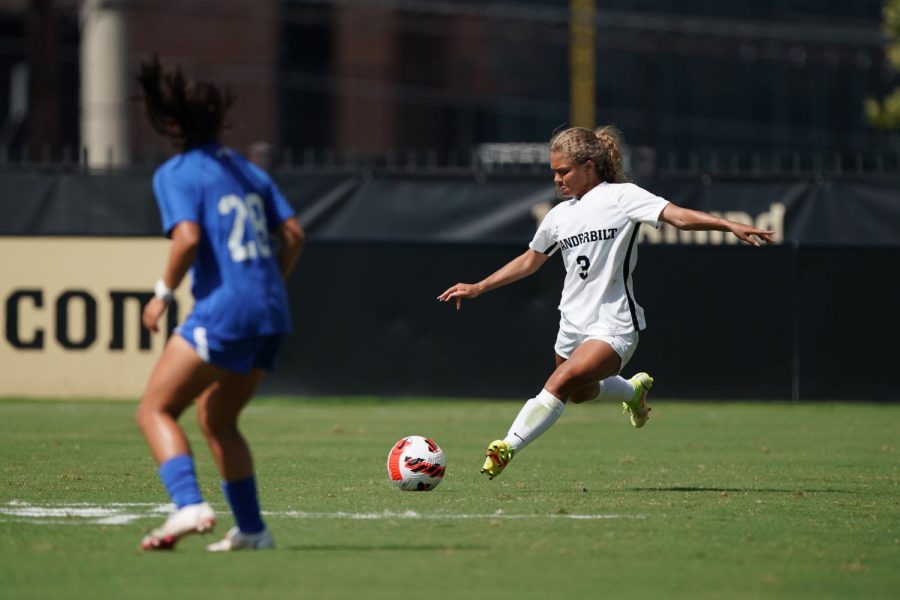 Madiya Harriott plays the ball forward in a loss to No. 5 Duke. (Vanderbilt Athletics).

On a sweltering day in Nashville, Vanderbilt soccer faced what might be its toughest opponent of the whole season—No. 5 Duke. The Commodores kept up with the Blue Devils for a half, but gave up two goals in rapid succession and couldn’t dig themselves out of the 2-0 hole.

“Fatigue. We got really, really tired,” Ambrose said. “Duke are really, really good in possession, and if you get stretched against them, they’re going to open you up.”

The team’s fatigue is well-justified by the fact that all three of their previous games went to overtime. Additionally, the players did not get much rest between today’s game and their last match against Western Kentucky last Thursday, Aug. 26.

On the field, the game started slowly, as neither side could muster a quality chance on target through about 15 minutes, when buildup play from the Commodores resulted in a breakaway chance for senior captain Raegan Kelley. She pulled the ball back and took a shot from about 12 yards out on the right side of the box. It seemed like the ball might end up in the top right corner of the net, but Duke keeper Ruthie Jones got a hand to it and parried the ball over the frame, keeping the game even at zero.

This ball movement is a thing of beauty. #AnchorDown pic.twitter.com/rKf9NRrfQk

The game reached a stalemate for the rest of the first half. Both squads got their fair share of chances, but neither could finish their opportunities. Overall, Duke did threaten to score more often, out-shooting Vanderbilt seven to two in the first period, but the game still remained 0-0.

In the second half, the Blue Devils struck first, breaking the match’s deadlock in the 53rd minute with a penalty kick from Duke captain Tess Boade. Abi Brighton was the guilty party as she fouled freshman Michelle Cooper, who had been causing problems for the Commodores all day. Cooper had four goals in Duke’s first three matchups coming into today, and she added to that resume by creating the Blue Devils’ first goal of the day. Meanwhile for Vanderbilt, this is their third conceded penalty kick in the last two games, though Ambrose didn’t seem worried about this trend.

“Well, if you look at the penalty kicks on Thursday night, you’ll see that they weren’t penalty kicks,” Ambrose said. “There’s no question about it, the rules weren’t enforced properly. So, at this point, nothing to worry about.”

Less than ten minutes later, the visitors challenged keeper Kate Devine once again. After a botched back pass intended for Devine, Cooper found herself one-on-one with the Commodore stopper. Devine won this battle as she stuck a leg out to deny Cooper’s bid for her fifth goal of the year.

What a save by Kate Devine. #AnchorDown pic.twitter.com/qxMTo7zYV7

However, a few ticks later in the 64th minute, Duke scored their second of the day. This time, the score came from the run of play, but again, Cooper created the opportunity. She picked up the assist by playing a beautiful ball into the final third of the field, finding Mackenzie Pluck who was streaking straight up the gut of the Vanderbilt defense. Pluck calmly drew Devine out of her net and chipped the ball over the keeper’s head, doubling the Blue Devils’ lead.

Duke secured the victory with a comfortable final half hour. In fact, neither side had any clear cut looks on net in the remaining time other than a Blue Devils free kick in the 82nd minute from about 25 yards out. The chance was wasted though, as the shot went directly into the waiting arms of Devine.

After the match, Ambrose was disappointed but still optimistic for the season’s outlook.

“Every game, we’re just trying to put a little bit more together,” Ambrose said. “At this point, [facing Duke] is just good experience for us.”

For the Commodores, this loss hurts, but the team can take solace in the idea that they kept up with national title contenders for the majority of today’s match. The squad will have to bounce back quickly as their next matchup is this Thursday, Sept. 2, at 7 p.m. CDT at home against Southern Illinois, where the team will look to change its fortunes after its two-game slide.