THORNTON: Media silence does not necessitate yours

Emphasizing rhetoric that promotes the idea Americans are “too stupid” to understand international humanitarian crises like Israel’s occupation of Palestine reinforces dangerous propaganda and media practices intended to distort our perception. 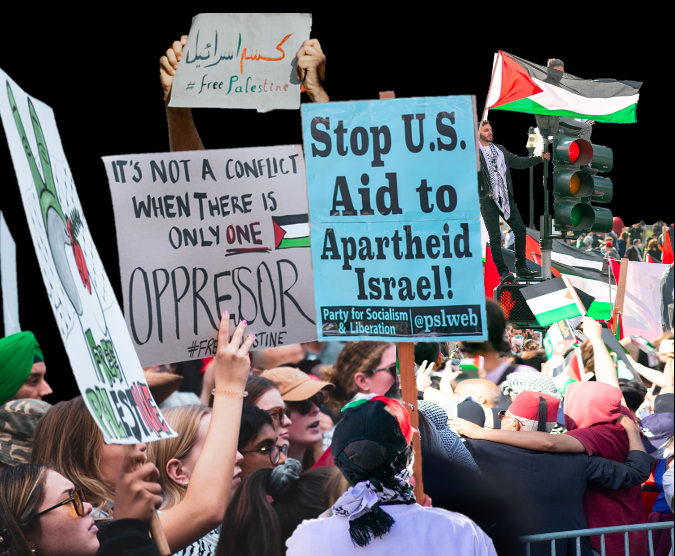 In 1999, President Bill Clinton issued the first apology a U.S. President has ever given on a U.S.-involved genocide.

The genocide occurred in Dos Erres, Guatemala, 1982. More than 200 individuals were violently massacred. It was later uncovered that this atrocity extended to over 600 villages and tens of thousands of Indigenous people were slaughtered. It wasn’t until 17 years later the United Nations Truth Commission was able to determine it was genocide. The commission noted America provided political and monetary support for the abusive government, as well as ammunition and military training in counterinsurgency, which “played a significant role in the torture, kidnapping and execution of thousands of civilians.” Throughout the decade, similarly abusive governments were backed in Honduras, El Salvador and Nicaragua. Despite thorough documentation of U.S. involvement during the time via government records and unpublished reporting, there was little to no media coverage.

In an interview in 1999, award-winning investigative journalist Allan Nairn (who was on the ground in 1982 reporting the massacres), addressed the consequences of the media’s silence on Guatemala: “I think the reason few things can be said today is because the Guate­malans are already dead. Right now the U.S. is involved in backing armies committing atrocities in places like Indonesia, East Timor and Colombia. And you don’t get aggressive, upfront reporting there, with few exceptions.” The question of support for these armies, as Nairn put it, “is not on the lips of Americans, because the press has not put it out there.”

We cannot discuss international crises or abroad policy without investigative reporting. Yet, history has shown our media fails the American people; ceaselessly, even with our own historical and recent domestic atrocities. Without self-education, especially on international topics, using reliable sources, literature, witness narratives, historian-accounts, etc., we are purposefully ridden with ignorance. Media distortion comes in not only the form of radio silence but also in the form in which news is told, edited and worded. Specifically, when it comes to the crisis in the West Bank, reporters and editorialists are endlessly scrutinized and censored when writing Palestinian stories.

Thus, when we emphasize that Americans cannot understand complicated international conflicts, we progress the agenda that they are not our problem; that we should not be discussing them and that if the traditional media does not place them front and center they are out of sight and out of mind.

While working for HBO and Vice, documentary-journalist Ahmed Eldin witnessed “the most visible experience of Israeli apartheid in all his reporting trips.” Eldin was shooting for his documentary in 2014, after Hamas members kidnapped and murdered three Israeli teenagers in the West Bank, catalyzing a new wave of Israeli military occupation in Gaza. As recorded by the United Nations, 2,251 Palestinians were killed—1,462 of them civilians—along with 67 Israeli soldiers and six civilians. Scenes such as settlers destroying Palestinian homes and footage of forceable removal in Silwan, East Jerusalem, were then cut from his 2015 documentary “without justification.”

In an interview with Slate, an Arab American journalist (who remained anonymous for their safety), reported the major American newspaper they worked for at the time was trying to skew the true number of Palestinian casualties through a myriad of narrative devices. This was often done by cutting eye-witness reports of Palestinians on the ground, uneven article coverage of damage in Israel and Palestine and aberrant editing of Palestinian realities, a level of scrutinization Israel Defense Forces’ perspective never underwent.

Slate also interviewed Peter Beinart, a writer and editor-at-large at Jewish Currents, a progressive Jewish magazine. Beinart discussed the carefully curated language stories undergo when discussing Israel and Palestine. Diminishing terms are used to avoid controversy and backlash, but often skew the report’s message. For instance, this practice omits terms like ethnic supremacy and apartheid: terms that have been used by Human Rights Watch (HRW) and United Nations to describe the situation in the West Bank and Gaza Strip.

To explain this skew, Beinart pointed out the difference between reporting on a “racist” incident, versus one “racially-tinged.” That blunt, honest phrasing, he hopes, will eventually apply to Israel. He hopes “people will interrogate that language and ask, ‘Maybe this is the politically safe language, but is it actually true?’”

Slate’s full 2021 article consists of numerous interviews discussing the media’s role in reporting on Israel. Many point to instances in which their respective news organizations edited their work in a way intended to display the crisis as evenly matched with similar casualties, damage, defense forces and supplies. The outcome of these practices is a purposefully distorted American perception.

In the interviews, it’s also important to note the majority of Palestinian and Arab journalists asked to remain anonymous. Why? Because sharing their experiences risks their livelihood.

“The Palestinians don’t exist in people’s imagination. They’re an abstract thing. And for many people, they don’t exist at all. They don’t have a right to exist. They certainly don’t have a right to tell their stories… anything that’s said in terms of the Palestinian narrative is immediately thrown into doubt.” These are the words of historian Rashid Khalidi, a professor at Columbia University, and author of “The Hundred Years’ War On Palestine: A History Of Settler Colonialism And Resistance 1917-2017.” On May 28, Khalidi was a guest speaker on NPR’s historical podcast Throughline. The doubt that Khalidi mentions is the reason, for years, he and other Palestinian journalists and archivers erased their heritage from their work in order to come off as unbiased and, in his words, “taken seriously.”
The privilege of sharing their raw stories and research is something many Palestinians do not have. This burden is extended when advocating for the rights of Palestinians puts many into a vulnerable state of blacklist, academic censorship and in the recent case of former AP correspondent Emily Wilder, immediate termination.
“I think Americans largely get it,” the former Prime Minister of Israel Benjamin Netanyahu told us in 2014. “They know who the good guys are and who the bad guys are.” The ways in which we are presented information prompts us to “get it.” This is not to say there isn’t biased reporting that exists in the opposing favor, because there is, but it would be a lie to say it’s frequent or comparable. We get, as past presidents of the United States have reminded us, that Israel is a shining democracy, despite Palestinian and Arab second-class citizenship. We get that this alliance withstands violent apartheid and military regime. We get discriminatory laws, reminiscent of American Jim Crow, and mass Palestinian incarceration. We get ethnic cleansing, imperialist blockade and systemic economic strain. We get periodic bombing. Get massacres. Get slow-motion genocide. We get it without question and without concern, and most importantly, get it while being too stupid to understand such a complicated conflict.

The crisis has reached a point where the HRW has accused Israel of committing “crimes against humanity,” as reported by NPR, and have for the first time, referred to these crimes as “apartheid and persecution,” drawing on years of the organization’s research. Moreover, recent bombings have violated the present agreement. Palestinians in the Gaza Strip have long resided in the world’s largest open-air prison and 50 years of Israeli occupation have directly caused widespread poverty. While highlighting these facts is not to negate the summer violence of Hamas and Gaza militants, it is also important to note that the United Nations has characterized the 14-year blockade as a denial of basic human rights leading to systemic water and food scarcity, military siege, deplorable sanitary conditions and mass death, an atrocity HRW concludes the U.S. and the international community at large have “turned a blind eye to.”

Apartheid. Persecution. Open-air prison. Blockade. These terms have only recently been used to describe the crisis. To re-employ Eldin’s interview, “The way we talk about it has changed. Eight years ago, when I was working at the New York Times and PBS and other places, I would have to have arguments about using the word occupy, just to point out that these cities are occupied,” he told Aymann Ismail of Slate. “Now, we’re using terms like apartheid.” Still though, as one interviewee reports, “self-censorship” by journalists and writers persists.
This is why parroting rhetoric that reinforces we should not be talking about Israel and Palestine is undeniably dangerous.
Lack of informed discussion, and consequently lack of concern, is what allows unethical media practices to go unnoticed. It falls in line with an age-old praxis reliant on American unknowing and media propaganda for the complicity of the American people: a system necessary when 1) America has involvement in abusive states and 2) is an enactor of modern colonialism.

Oftentimes this rhetoric is catalyzed by support for Palestinian liberation, exemplified by responses to Vanderbilt Student Government’s (VSG) solidarity statement, which honed in on their unity with the Palestinian community following brutal airstrikes in the Gaza Strip. Amongst the mixed reactions were a wave of comments, Instagram story reactions and shared posts dissuading students from discussing the issue on the account that we cannot “understand.” Many comments read that VSG’s statement and student-discourse on the situation are “useless.” We are too ignorant to delve into the “complexities” of “such an issue.” “Conflicts in the Middle East have been ongoing for decades!” one response read, as if to say the Middle East is inherently violent, so don’t worry your little American heads about it. So many acted as if the terms Palestine or Palestinian are curse words. It’s dehumanizing.

This op-ed is not an opinion on VSG’s statement or ad rem critiques but concerns the amount of privilege it takes to hamper discussion on an issue when even the brave journalists our news rely on cannot accurately discuss it. When reliable news offices in Gaza are blown up and human rights violations can be hidden. When an entire territory is experiencing intense media blackout and advocation wanes subsequent high-profile attacks. When, despite censorship and digital propaganda, social media platforms are one of the only places Palestinians can share their raw, unfiltered stories. Do you think we would’ve seen nearly as much footage of the airstrikes if it wasn’t for users on these platforms?

Moreover, when it comes to Israel and Palestine, western media coverage is so biased that the bias itself is continuously debated and under question by all sides. The idea that we shouldn’t be talking about the crisis or commenting on it only adds to the barriers of miseducation and advances propagandistic rhetoric that Americans can’t understand. Acknowledging this does not argue for media distrust, but reminds us of the importance of deliberate self-education, discussion and the necessity of being responsible media consumers in an era of disinformation and censorship. We are lucky there is not complete radio silence that so easily occurred before the rapid spread of information. We are lucky to have access to international media, cellphones, cameras and shared individual documentation, even when those primary sources are often weaponized and altered. To limit discourse on the sole basis of complication silences the questions we should be asking about foreign policy and modern imperialism, and advances the agenda of media propaganda: complicity.

No one thinks humanitarian crises will be solved with an Instagram post, infographic share, or student government solidarity statement. However, when we are silent or complacently uninformed, we reduce civilian victims abroad to nothing more than “abstract things;” people who are already alienated from many of our news publications, and with silence, are discarded from radical imagination and education, our mere conversations, vital activism and political ideologies.