Here for the Wrong Reasons: Episodes 2 and 3 of ‘Bachelor in Paradise’ Season 7

A recap of the second and third episodes of the latest season. 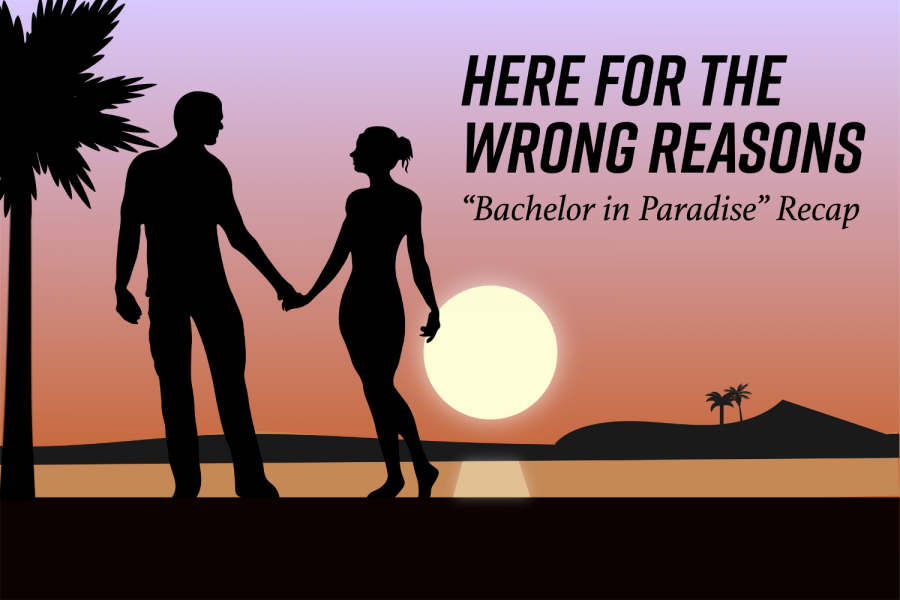 Like I warned you last week, ABC is playing games with us this season. This week, they dumped two 2-hour episodes on us, which I wouldn’t mind if they were, you know, both good. Tragically for us loyal viewers, Monday night’s antics could have easily been consolidated into 45 minutes—Victoria P. can only forget James’ name so many times—but like any toxic relationship, we’ll let them waste our time any day. On Tuesday, the producers stepped up their Paradise game and gave us two couple upsets, a new instigator and a lot of crab footage. We’ve had a busy week, Bachelor Nation, so let’s dive into the drama from this week’s double-header.

Demi has a date card and chooses turtleneck Brendan to accompany her. Things look like they’re going well—they laugh, they joke, they make out—but Brendan then drops a bomb on Demi: he thinks they should explore their connections with other people. A disgruntled Demi returns to the beach solo, fuming about their progression from “tongue wrestling” (ew) to rejection. Brendan is no saint, as we’re about to find out (*cough* Pieper *cough*), but Demi declares that “He wants to have his cake and eat it too. Everyone is the cake, and the beach is the eat it too,” which makes no goddamn sense. No one on this show has a stellar grasp of metaphors—or grammar or spelling for that matter—but this is just ridiculous.

Call me crazy, but this might have been an actual genuine, sweet date? We’re in uncharted waters here, and I am all about it. At dinner, Jessenia tells Ivan how much she respects him for addressing the topics of race and the experience of people of color on Tayshia’s season. She also reveals how she’s faced a lot of online negativity after her time on Matt’s season, especially in relation to Rachael Kirkconnell’s past behavior. Like the woke sweetheart he is, Ivan says that he recognizes how the show and the resulting feedback are more difficult for female contestants, and my heart melts. I wasn’t Jessenia’s hugest fan on Matt’s season, but I ship these two together (although Ivan, if you’re back on the market post-Paradise: call me).

Pour one out for James Bonsall, aka Box Boy from Katie’s season. The poor guy has been talking to Victoria P., who cannot remember his name for the life of her. Sadly, that’s not the worst of it for James: Tammy informs the rest of the beach that Victoria P. has a secret boyfriend at home, who, naturally, is a Nashville-based country singer. James confronts her about this, to which she responds, “Welcome to Paradise.” Sensitive, Victoria P. She claims that they broke up in May and that he encouraged her to go on this show, which is just so sus. Thankfully, Box Boy doesn’t buy this, and presses her hard enough that she breaks and admits that she was, in fact, there for the wrong reasons (shoutout to this column!). Victoria P. decides to leave Paradise—although we all know she would’ve been sent home at the next rose ceremony—and her country singer boyfriend is likely punching his TV.

For the first time since he arrived on the beach, David Spade is finally funny. Unfortunately, this occurs while he’s in the car leaving paradise. His jokes included “It’s fun to be with a bunch of other good looking people, it rarely happens” and “I’m just looking forward to seeing a lot of those people on Cameo. I want to make ‘em say happy birthday to me for nine bucks.” Reflecting on his hosting gig, he says, “Doing barely anything was a lot harder than I thought,” which made me giggle. He then wisely warns the next host to “bring your crab spray.”

I’m not sure if Karl is allergic to sleep or gets Botox directly under his eyes, but that boy’s bags are insane. And probably purchased at Walmart.

According to Victoria P., Louisianan men pee outside in the morning? I didn’t have plans to visit Louisiana, but now I definitely don’t.

This isn’t minor, but I don’t want to give it more screen time. The beach starts discussing how Brendan and Pieper were hanging out pre-Paradise, prompting Natasha to confront him about it. Brendan takes a line out of the douchebag almanac and says they were just “hanging out,” and I promptly got nauseous. Unfortunately, Natasha falls for his reassurance that he’s into her, so I’m gearing up for the disaster that will inevitably ensue if Piper arrives in Paradise.

As of the end of the episode, here are the couples: Connor and Maurissa; Noah and Abigail; Joe and Serena; Jessenia and Ivan; Kenny and Mari; Tammy and Aaron; Tre and Tahzjuan; and Brendan and Natasha.

Tuesday Night
On Tuesday’s show, the women have the power, which we obviously love. Since the number of women currently outweighs the number of men, we can expect some new male arrivals, who the producers have no doubt selected with the intention of stirring up the pot. And stir the pot, they did.

On Monday’s episode, we bid adieu to Dave Chappelle (oops, I meant David Spade), and what A-lister do they bring in to replace him? Well, he has a great intro—a boom box appears on the beach with a sign that reads “play me” and blasts “It’s Gonna Be Me” by NSYNC—so it must be Justin Timberlake, right? Close, but no cigar. Our new guest host is Lance Bass, NSYNC’s sloppy seconds (although he is less problematic than Timberlake).

Thomas Jacobs, aka Mr. Here for the Wrong Reasons from Katie’s season, is here, and the guys from Katie’s season are foaming at the mouth. Like, I fully expect Aaron to physically fight Thomas at some point, and I can’t say I’d be mad about that. The women, on the other hand, are very into Thomas’ bad boy vibes. Couldn’t be me (and ~it’s not gonna be me~). Oh, and in case you didn’t catch it from the approximately two dozen times Thomas mentioned it, he’s 6’6”. Congrats, but that doesn’t make up for being a dipshit. I’ll bet you $20 that Lance Bass sings “Bye Bye Bye” when Thomas inevitably gets sent home.

Riley Christian is the next fresh meat to arrive on the beach, and goddamn, has he had a glow-up since Tayshia’s season. Cue: the women getting hot (literally and figuratively) and bothered. Tahzjuan tells us that she came on BIP for him, Tammy says that “the man’s arms have its (sic) own zip code” and someone’s voiceover admits that she’d let him crush her with his biceps. Someone get these girls some water, because they are thirsty. Tahz is freaking out like a fifth grader whose crush just sat next to her at lunch, solidifying her status as the most relatable person on this season. Personally, I’d advise Riley to skip the dangly earring, but he is definitely not skipping arm day.

Much to Grocery Store Joe’s (GSJ) chagrin, Thomas asks Serena out on a date. Serena pulls a classy move and sits GSJ to tell him she’s accepted Thomas’ invitation. Unfortunately for GSJ, this happened to him during his first stint in Paradise—Leo (the one with the mane of long curly hair) swooped in and tried to steal Kendall from GSJ—and he is triggered. We barely see any of the actual date, but Serena tells a nervous GSJ that she told Thomas to pursue other people, and Bachelor Nation collectively sighed in relief.

Following the trend of asking out a girl that was already coupled up, Riley chooses Maurissa—who has apparently never been on a real, romantic date—and poor Connor wilts a little. Riley and Maurissa go to dinner at a place called “Lance’s Basserie,” which might be the worst thing this show has ever done. The two are treated to a dinner that’s reminiscent of James Corden’s “Spill Your Guts or Fill Your Guts,” where they can choose to answer a question honestly or eat an unappealing food item as punishment. They both choose to eat tongue instead of revealing how many people they’ve slept with, and my vegetarian self almost threw up. Maurissa says that she’s a very sexual person, and Riley gets…excited. The sexual tension between these two is palpable, and now I’m changing into black clothes because it’s time for Connor’s funeral. Back on the beach, Connor is strumming his guitar (gotta love aspiring Nashville musicians) and is the only one who thinks his connection with Maurissa is strong. Riley and Maurissa are the first couple of the season to christen what is affectionately referred to as “The Boom Boom Room,” so pour one out for Connor.

Thomas apologizes to the other guys from Katie’s season for everything he’s done to wrong them. He got turned down by Serena because of what the guys have been saying about him, so I see straight through this apology ruse. Clearly, Thomas is just trying to save his own ass (and his chances at finding love), but hopefully it puts an end to the drama.

Oh, wait—there’s already fighting again. Serena spills the tea about her date with Thomas, including that he more or less said that Tre was emotionally immature and needed coddling. Tahz tells Tre, Tre confronts Thomas and proclaims that he is dead to him. Pop off, Tre.

Tammy wins Quote of the Episode: “I kinda like when guys cry, it gives me a lot of energy.”

Unlike with “The Bachelor” and “The Bachelorette,” we actually get to see contestants eating! Unheard of in this franchise, where most contestants subsist on a diet of alcohol, sleep deprivation and salt water from their tears.

Karl has a boxing match with the air, because he’s unhinged. Plus, I think he got KO’d by his imaginary opponent.

Tahz freaks out during an interview when a crab crawls in. She declares, “I can’t do all this nature.” Same. She then makes friends with the crab because #personalgrowth.

Demi’s intro segment is her literally stirring a pot. I’ve gone on the record saying I don’t like her, which I stand by, but this was funny.

As of the end of the episode, here are the couples: Riley and Maurissa; Noah and Abigail; Joe and Serena; Jessenia and Ivan; Kenny and Mari; Tammy and Aaron; Tre and Tahzjuan; and Brendan and Natasha, maybe?? They haven’t kissed yet, there are still the rumors that Brendan is stuck on Pieper and they get into an argument at the end of the episode. So, TBD on that one.

Will Pieper arrive on the beach to stir up drama? What about GSJ’s ex from BIP season 5, Kendall? And rumor has it there might even be a former Bachelorette making her Paradise debut…tune into next week’s double-header to find out! Until Monday, Bachelor Nation.