‘What if…’ Peggy Carter and Steve Rogers were actually in love?

Though it looks and sounds a little awkward at times, Marvel Studios’ “What If…?” could rewrite the MCU's future with its unbounded exploratory creativity. 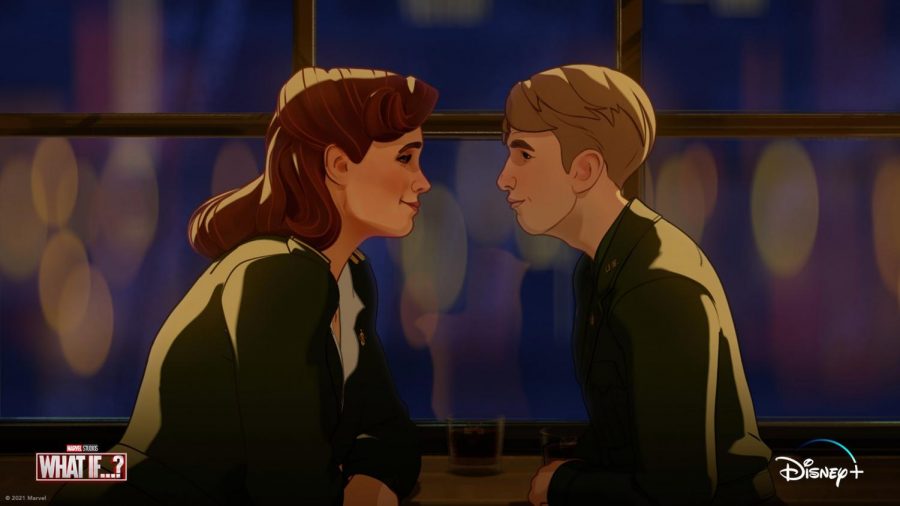 The first episode of Marvel Studios' "What If...?" presents a version of the Peggy x Steve romance that's actually believable, nine years too late. Whoda thunk it? (Marvel Studios/What If...?)

Yeah, I know that’s not the real title. But that’s sure what it felt like the first episode of Marvel’s new series “What If…?” was asking us—and not in a bad way, either. It was honestly refreshing to see a version of the Peggy x Steve romance in which I legitimately believed they had feelings for each other—though that arguably wasn’t the episode’s focal point.

Officially titled “What if Captain Carter were the First Avenger?”, the first episode sets an exciting tone for the rest of the series with a fully fleshed out vision of an alternate timeline within the larger MCU multiverse, now smashed wide open thanks to Loki and Sylvie. After an appropriately brief expositional introduction to the concept of an AU (alternate universe—hi Tumblr users), we dive right into a new version of the first “Captain America” film from 2012 where Agent Peggy Carter takes the serum—not Steve Rogers—and becomes a Union Jack-inspired super soldier. Pretty self-explanatory.

The concept of a show entirely about AUs is a little self-indulgent, but I’d be lying if I said it wasn’t fun as hell. Every fan wants to see their fandom’s AU theories come to life, and “What If…?” is perhaps the first time those prayers have been answered on such a big-budget scale. In each episode, the generous AU god known as the Watcher shows us a reality in which one small decision occurs differently than it once did in the main timeline. He tells us in his best Law and Order SVU voice that “these are his stories,” stories within which he cannot interfere. We’re not really sure why that is, or why he’s showing them to us, but I’m not complaining.

So, Captain Carter. Her butterfly-effect moment arrives just seconds before Steve’s serum transformation, when she decides to remain in the operating theater instead of watching the procedure from a viewing balcony like main-timeline Peggy. Because of this inconsequential decision, the Hydra spy’s attempt to sabotage the project plays out differently, and Peggy, not Steve, emerges from Howard Stark’s capsule 8 inches taller with massive biceps. Gulp.

We can sense immediately we’re about to get a girlboss arc, which begs the question: haven’t we moved beyond female heroes whose stories focus on their being “just as heroic” as male heroes? The MCU’s recent handling of strong, complex female characters like Wanda Maximoff and Okoye seemed to indicate that we had finally escaped the far-reaching tentacles of cringe feminist shoehorning, but alas—Captain Carter suffers the same fate as Carol Danvers and Natasha Romanoff with a few barf-inducing lines about girl power. I’m reminded of a certain other feminist we could really learn from, who’s getting his own live-action theatrical debut next year. Now that would be a crossover for the ages.

Thankfully, the cringe-feminist undertones don’t destroy the episode, only certain scenes that use the words “dame” and “fraulein” a bit too liberally. Maybe they’re appropriate for the 1940s setting, where sexism still runs rampant, but they’re still a bit much.

These misfires aren’t critical, but they distract from something “What If…?” surprised me with: a genuinely believable romance. In the main MCU timeline, Peggy and Steve (played by Hayley Atwell and Chris Evans) seem more like work friends than star-crossed lovers, and Steve’s obsession with a photo of her in his compass has long been a point of contention with fans. Though there are those who ship #Steggy, Steve and Bucky’s will-they-won’t-they relationship spanning four and a half feature-length films remains one of the most famous examples of Hollywood queerbaiting ever.

“What If…?” takes this matter into its own hands and sidelines Bucky (played by Sebastian Stan) almost entirely. This allows Peggy and Steve to share the heartfelt moment in the bar that once belonged to Bucky and Steve instead. Likewise, Peggy and Steve reclaim the fake-out death scene during the train heist, fight together alongside the Howling Commandos and make sacrifices for each other. Peggy’s iconic line about teaching Steve to dance is even adapted to flow so much more naturally, suggesting they might actually be in love in this AU. Nine years overdue.

Plot devices aside, “What If…?” breaks another barrier as the first animated MCU project. I’ve got mixed feelings about this development, which both improves and detracts from the show in key ways. Most noticeable is that the voice acting is a little rough. I like to say that all live-action actors technically can voice-act, but not all of them are good at it. It’s an entirely different beast to have to communicate all your emotions with just your voice, and most of the cast—Atwell as Peggy in particular—pull it off in this episode with little to no cringe. But it’s not perfect.

We also need to talk about the show’s use of cel-shading. It’s a method of rendering 3D-animated objects in a 2D style, and it’s an effective trick for translating the comic book aesthetic to the silver screen. However, the animators had a bit too much fun with their shading tools, meaning the otherwise smooth animation is quite literally overshadowed by washed-out colors and stiff, unnatural smiles. This makes the characters look like those complicated Halloween costumes where people dress as “Archer” characters using makeup to appear two-dimensional. Niche reference, I know. You can applaud me later.

Animation also allows characters to perform crazy stunts that live-action actors can’t—because, well, they’re impossible in real life. Various trailers had me worried that the show wouldn’t take advantage of this, but the first episode proved me wrong. A veritable ton of German soldiers straight-up die on screen, and Peggy’s wild stunts go far beyond anything Evans or his stunt doubles could accomplish in the first movie. She even shoots a guy at point-blank range, which always looks cheesy in live-action films.

The greatest thing about “What If…?” is that it’s not limited to asking only the question in the episode’s title. Yes, it does ask, “What if Peggy got the super soldier serum?” But it also asks: “What if Howard Stark had early access to the tesseract? What if Steve piloted a proto-Iron-Man suit? What if Red Skull actually opened a portal to another dimension?” (Bonus: What if Peggy fought Fortnite Jonesy?)

With “What If…?”, we’ve become privy to a truly unlimited sense of curiosity and creative exploration that will hopefully continue to fuel the AU endeavor and the MCU at large. At this point, it almost seems reasonable to ask: What if it never ends?

The first episode of “What If…?” is now available to stream on Disney+.