After an impressive 2020 campaign, Vanderbilt soccer looks to make a splash in 2021 with much of their roster returning. 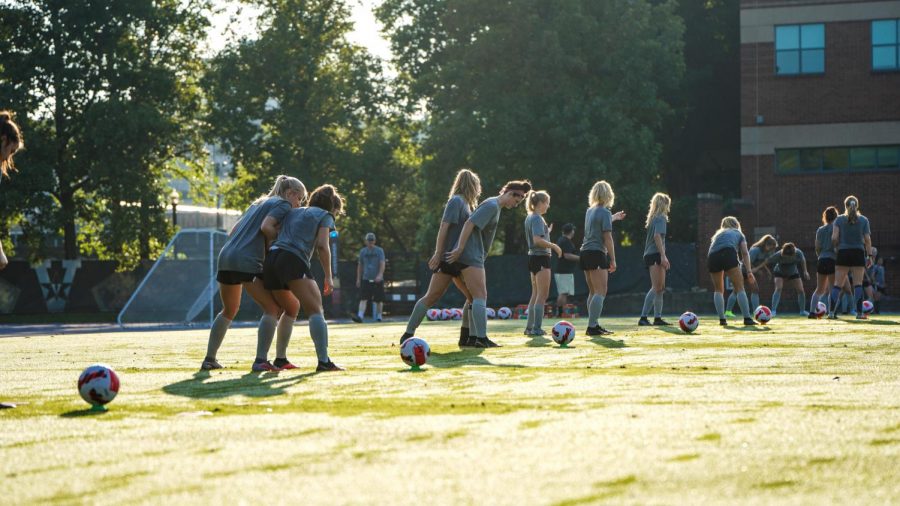 Vanderbilt soccer started its preseason practices this past week in preparation for their first exhibition match on Sunday. (Vanderbilt Athletics)

In a modified year due to COVID-19, Vanderbilt soccer found plenty of ways to make its season interesting. On the field, the team was streaky. They started the season 1-0, but then proceeded to embark on a three-game losing slide that included two overtime losses to Tennessee and South Carolina. They followed this unfortunate run with a three-game win streak that was kicked off by an overtime victory against Florida. The team finished its regular season against Ole Miss in yet another overtime defeat, bringing the squad’s overall record to 4-4.

Following an average fall regular season, the team caught fire in the SEC Tournament. They won four straight matches and claimed the tournament title for the first time since 1994. Unfortunately, the Commodores couldn’t carry this momentum into the NCAA Tournament as the event was moved to the spring due to COVID-19.

However, before competing for a national championship in the spring of 2021, one player—Sarah Fuller—was called into action on a very different field. The senior netminder played for the Vanderbilt football team and became the first woman to both log a snap and score in a Power Five conference football game. She recorded her first action against Missouri by squibbing the opening second-half kickoff. A couple weeks later, she scored for the first time by booting in two extra points in a losing effort against the Tennessee Volunteers.

Eventually, the spring season arrived, and Vanderbilt was focused solely on preparing for a title run. They played a total of six games—three of those being exhibitions—and amassed a 3-2-1 record in those tune-ups, finishing with a tie against No. 7 Duke.

In spite of this strong spring, the program’s season came to an abrupt halt in its first NCAA Tournament game, falling to a strong Penn State side 2-0. Vanderbilt seemed to have lost its SEC Tournament form, but few can blame them with such a long hiatus in between their segments of competitive play.

Despite a disappointing end to a resilient year, the Commodores return this season with nine of the 11 starters from that Penn State matchup. Given this, head coach Darren Ambrose is eager to balance the existing experience with new, untapped talent.

“We’ve got a lot of unknowns. There’s a lot of potential—there’s a lot of ability that I don’t think we’ve seen yet, so I’m actually excited to see that, knowing that we have some foundation in place with a lot of the girls that are here,” Ambrose told The Hustler. “So, I think we have a really nice blend on paper, but paper doesn’t win any games.”

However, the two departing players from that final contest are Haley Hopkins and Leila Azari—hardly run-of-the-mill contributors. Hopkins was the squad’s leading scorer last season and netted 34 career goals over four years on West End, good for second on Vanderbilt’s all-time scoring list. So often, she played late-game hero when the team was in need. Meanwhile, Azari was known for creating consistent, crucial opportunities for the Commodores. She also had been a staple of Vanderbilt soccer for the past four seasons, starting an unbelievable 74 games during her tenure in Nashville. Still, Ambrose expects the team to recover as it has in years past.

“I’ve been doing this for a long time, and every year we graduate players. And every year we come back and play the following year, and I think if you’ve coached in college, you know that every year, kids are going to graduate. And every year, you find players that now grow because there’s space for them to grow,” Ambrose said. “I always say you never replace players. You don’t replace anybody. We all, in our own way, bring something to the table. So we’ve just got to play differently.”

Luckily, Ambrose and company will have a strong base of leadership to build off of this year. The team has three graduate players (only two will play though, due to an injury last season to Myra Konte), thanks to COVID-19 eligibility rules. Additionally, the squad has seven seniors and five juniors. This seniority is balanced extremely well by the wealth of youth on the team. In fact, 17 of the 32 players on Vanderbilt’s roster are underclassmen. On the other hand, Ambrose doesn’t pay much attention to graduating class, instead he merely looks at performance.

“Look, the best players play,” Ambrose said. “Performance at this level is not so much about being a freshman or a senior. It’s about who trains and who shows the best through the week of practice. And I think that’s a principle that doesn’t really change. If I’m going next week and you find that there’s five freshmen starting against Chattanooga, guess what? They earned the right to start.”

Ambrose talks the talk, but he also walks the walk. For instance, in the Penn State game last season—the biggest match in recent program history—the coach started freshman keeper Kate Devine over the polished senior Fuller due to each’s play leading up to the tournament. Ambrose is certainly not one to shy away from a difficult decision.

Moving forward this year, the program looks to find a harmony between success this season and development of future talent. To aid this balance, graduate midfielder Maddie Elwell expects herself and the other veterans to help younger members of the team in their progression.

“Using my experience and sharing that with the team—that could be a different way of leading that I hadn’t thought of before,” Elwell said. “Going into this fifth year, that’s [leading and passing down knowledge] something I’m thinking about and I’m really excited about.”

Off the field, Ambrose and his players anticipate a stronger team bond after COVID-19 halted so much squad interaction. Indeed, the Commodores will need to build camaraderie and community if they want to take home the ultimate prize—a national championship. So, naturally, senior midfielder Raegan Kelley stressed the importance of coming together as a team for the season after an odd 2020.

“I’m ready to get back into the swing of things and how we normally do it, and I think everyone feels that way,” Kelley said. “I am excited to bond with the team in the locker room—we didn’t get to do that last year, so I think it’s gonna be a good year for everyone, honestly.”

The Commodores open their campaign ranked No. 18 nationally and will begin their exhibition play on Sunday against Chattanooga at 7 p.m. CDT. The match kicks off a 20-game regular season that includes two exhibition contests and ten SEC matchups.

The toughest stretch of the year will undoubtedly be the last ten games—all SEC opponents. The run includes No. 17 South Carolina and No. 9 Texas A&M on the road as well as No. 13 Arkansas at home. All three of these games, in addition to a home out-of-conference matchup with Purdue on Aug. 22, will be televised on the SEC Network. However, the highest-ranked team the Commodores will face this season is actually in the ACC: No. 6 Duke. The sides will face off on Aug. 29 in Nashville in what will surely be a critical match for Vanderbilt.

Overall, the Commodores are not afraid to aspire to greatness. They will start by vying for an SEC crown but certainly will aim higher by season’s end. Only time will tell if all the pieces can come together, but for the Commodores, 2021 looks bright.