After two years as a Commodore, Vanderbilt catcher CJ Rodriguez became the 11th Corbin-era catcher to be selected by an MLB franchise. 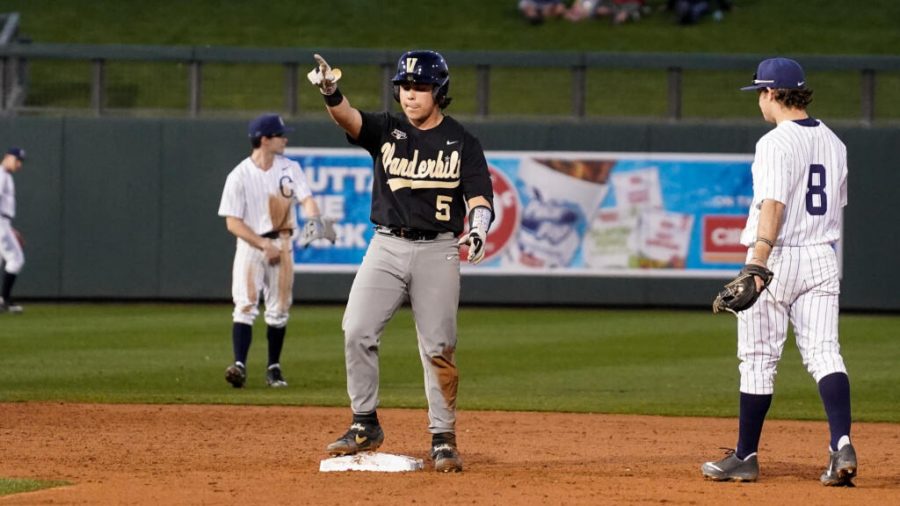 Vanderbilt catcher CJ Rodriguez points to the dugout after his double against UConn, one of his four hits on the day.

Vanderbilt catcher CJ Rodriguez was drafted by the Athletics with the 158th overall pick in the fifth round of the 2021 MLB Draft. Rodriguez was the fourth Commodore selected in Monday’s draft. The catcher was dominant behind the plate this year, recording only four errors and five passed balls in 58 games this season. On top of that, he caught 14 runners stealing on 26 stolen base attempts.

Rodriguez’s freshman campaign was halted prematurely due to the COVID-19 pandemic, but he emerged as Vanderbilt’s first option at catcher in his sophomore season and provided stout defense and key at-bats to the side in their quest for another championship. His career was highlighted by a .995 fielding percentage, a .257 batting average and a .389 on-base percentage.

The 5’10”, 200 lbs. sophomore from Newport Beach, California, will now attempt to make the jump to the MLB after an impressive 2021 season. Though the VandyBoys came up short of their ultimate goal, Rodriguez’s play throughout the run showed that he can perform at a high level in important moments. He will now enter the Oakland A’s farm system as one of baseball’s most exciting catcher prospects.