The Commodores are just one win from the CWS finals, despite a sloppy performance against the Wolfpack on a bizarre day in Omaha. 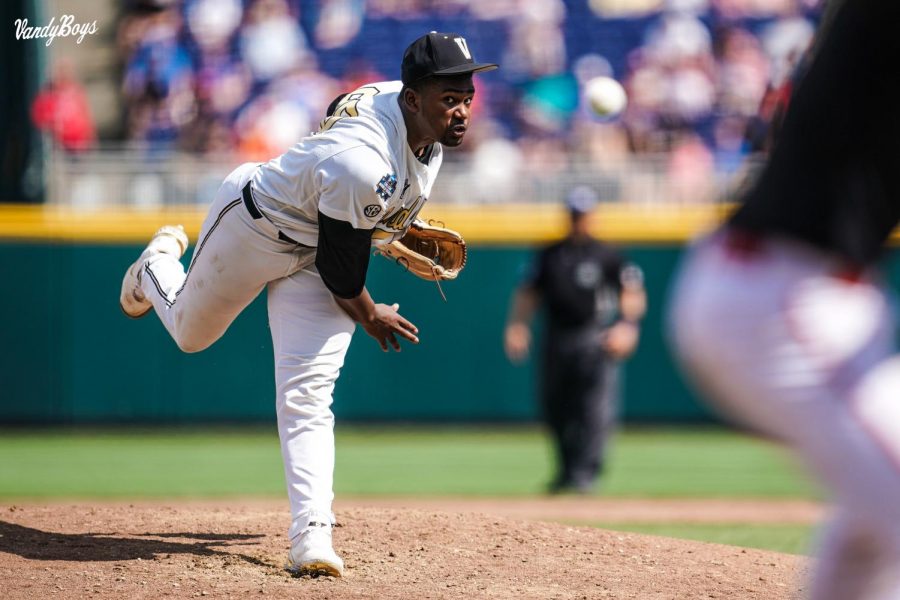 It was anything but just another day at the ballpark on Friday afternoon at the College World Series in Omaha. Rumors began circulating early in the morning that there was a COVID-19 issue within the North Carolina State program and those rumblings were realized about an hour before the scheduled first pitch. After only eight players emerged from the NC State dugouts for regularly scheduled pregame warmups, it was announced that the game would be delayed by an hour due to “health and safety protocols”. Nonetheless, Vanderbilt was able to prevail over the shorthanded Wolfpack, 3-1, forcing a winner-take-all game tomorrow between the two sides.

“We didn’t know what was going to happen. The NCAA said that there was something up from a health perspective. It just became a situation we had to deal with like a rain delay. It was North Carolina State’s situation, not Vanderbilt’s, so we had to be patient and wait it out,” Corbin added on the pregame delay afterwards.

Eventually, the game was rescheduled to 2:07 p.m. CDT after originally being slated for 1 p.m and concerns about the game being played at all surfaced. NC State released a lineup featuring just five of their nine regular starters—and trotted out just 13 players total. Among those missing the contest for the Wolfpack was DH Terrell Tatum, the hero for NC State in the first matchup between these two teams. The news created a cloud of uncertainty over the entire game and a truly peculiar scene in the opening moments of the contest.

“It’s almost like going back to the sandlot. We didn’t know who was going to pitch until five minutes before the game. There’s really nothing you can do about it. We knew he [the NC State starter] was right-handed. The nature of the game and the mystery of the game—it was just an odd situation,” Corbin said postgame.

Suddenly, all pressure shifted to the Vanderbilt side to take care of a badly depleted Wolfpack side—and the tension was palpable from the jump for the Commodore offense. Through three innings, Vanderbilt had just two baserunners and no hits—thanks in part to some terrific defense from NC State.

T2: Javi Vaz gets absolutely robbed by Devonte Brown in right 😳 1 out

Vanderbilt didn’t seem to sense that pressure defensively though, as they were led by a determined Kumar Rocker (W, 14-3). The Vanderbilt ace was locked in from the first pitch, striking out the first six batters he faced and eight of the first nine. First baseman Sam Highfill, the starting pitcher from Vanderbilt’s last matchup with NC State on Monday night, was ironically the only Wolfpack hitter to manage anything off of Rocker through three innings, as he singled.

E1: ⚔️⚔️⚔️ Kumar strikes out the side in the bottom half of the first

The Commodore offense finally got going off of fill-in starter Garrett Payne (0-1, 7.27 ERA) in the fourth inning. Dominic Keegan reached first on an error from Vojtech Mensik, who was playing shortstop instead of his usual third base, to get the frame started. Troy LaNeve sacrifice bunted Keegan to second and Javier Vaz rolled over a ball to the pitcher to move him to third. Then, CJ Rodriguez ripped a two-out single to left field that brought Keegan home. Parker Noland followed that with an opposite-field single and then Payne beaned Spencer Jones to load the bases for Vanderbilt. A wild pitch from Payne sent Rodriguez home to give the Commodores a 2-0 lead before Jayson Gonzalez flew out to end the inning.

The Wolfpack then plated a run in the bottom of the fifth to cut the deficit in half. Carson Falksen started the inning with a bunt single and Highfill drilled a ball through the right side to put two on for the Wolfpack. DeAngelo Giles skied an RBI sacrifice fly into center to bring Falksen home after a fielder’s choice moved him to third.

Vaz, who had yet another productive afternoon for Vanderbilt, walked and stole second to kick off the sixth. The Wolfpack then elected to bring in Dalton Feeney, one of just four active pitchers, to take over with no outs. Payne, who had appeared in just six games this season, threw five innings with just one earned run, three strikeouts, and three hits allowed.

Rodriguez moved the speedster Vaz to third base on a line out to right center and Noland shot an RBI single to center field for his second hit of the day to give the Commodores took a 3-1 cushion. Spencer Jones (single) and Enrique Bradfield Jr. (fielder’s choice) both reached to load the bases for the Commodores, however Carter Young struck out to end the inning.

Rocker returned to form in the sixth inning, allowing just one baserunner and striking out two Wolfpack hitters to bring his total to 11 on the afternoon. He finished with a final line of six innings pitched, 11 strikeouts, five hits, one earned run, and just one walk on 111 pitches. That Rocker’s fantastic performance was so understated in a whirlwind afternoon in Omaha is a testament to his continual steadiness as Vanderbilt’s go-to guy over the last three seasons.

“I thought he pitched extremely well. Kumar got us deep into the ballgame gave us everything he had,” Corbin said after in the postgame.

Vanderbilt’s sleepiness on offense continued into the seventh despite a leadoff double from Keegan. Vaz worked his second walk of the day off of Feeney, but Vanderbilt left two more runners base with no damage for NC State.

NC State put pressure on the Vanderbilt bullpen in the bottom of the seventh and eighth. The Wolfpack loaded the bases in the seventh as the Commodores cycled through Chris McElvain and Hugh Fisher before landing on Luke Murphy to finish out the frame.

Highfill hit another single to kick off the inning—making him 3-3 on the day. Eddie Eisert then reached via an error, which put runners on first and second with no outs. The Commodore defense then got a big lift from CJ Rodriguez behind the dish as he gunned down Highfill at second base to grab the first out of the inning. McElvain then struck out a batter and walked another before Corbin turned to Fisher. Fisher hit the only batter he faced to load the bases, but Murphy squiggled his way out of the jam by inducing a pop up in the infield.

Spencer Jones reached on an error and Carter Young walked, but Vanderbilt was unable to bring either home in the top of the eighth—bringing their left-on-base count to 12. Two more Wolfpack reached base in the bottom of the eighth inning, but Murphy once again got himself out of the jam by throwing a strikeout and working two groundouts.

Vaz singled and stole second in the top half of the ninth to cement another stellar performance in Omaha and CJ Rodriguez walked to give the Commodores two on with just one out. Noland then launched a liner into left field that hung up a second too long and was caught by Austin Murr. In a bizarre turn of events, Rodriguez sprinted to second base and was easily doubled off of first base for the double play and end the inning.

The Wolfpack, who fought all day with just 13 available players, continued to scrap to the very end. Jonny Butler singled with two outs and Luca Tresh walked to put two Wolfpack runners on. Murphy got Devonte Brown to ground out to Young at shortstop to finish off the 3-1 win for Vanderbilt.

“Murph left everything he had on the field. He did what he had to do to keep runners off the scoreboard,” Corbin added after the game. Murphy finished the day with one strikeout and two hits allowed over 2.1 innings of work.

Vanderbilt and NC State will face off again at 1 p.m. CDT tomorrow with the winner advancing to the College World Series Finals. For Vanderbilt, despite another lackluster offensive performance for much of the game, they are just one win from returning to the finals with a chance to defend their title. The starter for the Commodores tomorrow is still to be determined—Jack Leiter is on just four days rest after pitching Monday night. As for NC State, the biggest question heading into tomorrow’s rubber match is the availability of most of their roster—the Wolfpack had just 13 players today and used all of them in today’s contest.