Despite a fantastic effort from Jack Leiter, Vanderbilt was unable to knock off the streaking Wolfpack and now faces elimination. 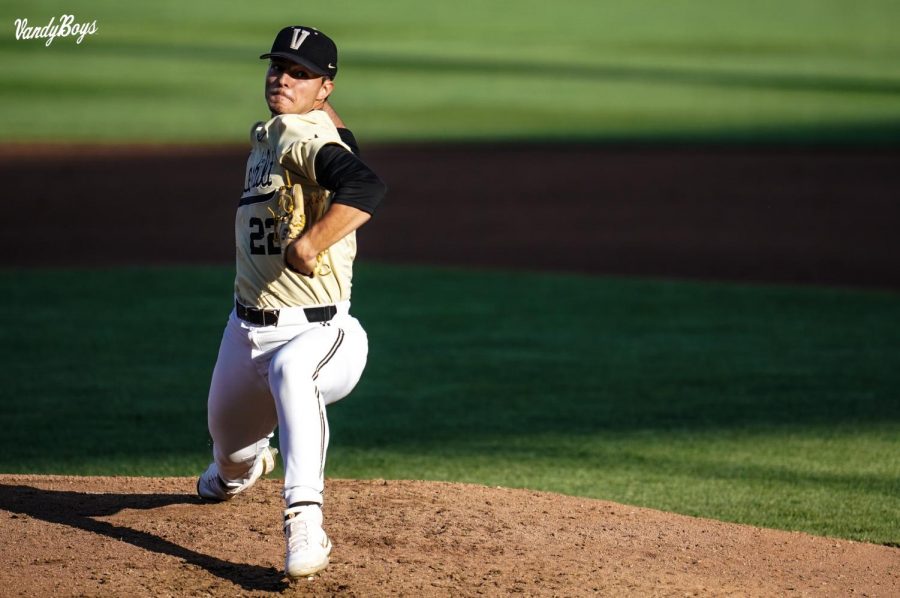 It was yet another magnificent performance from Jack Leiter (L, 10-4) on a brisk evening in Omaha, both in terms of temperature (60 degrees) and pace of play (two hours and 20 minutes). However, the Vanderbilt ace was bested by his opponent for just the fourth time this season, as North Carolina State freshman Sam Highfill was brilliant all night for the Wolfpack, finishing with a line of 7.1 innings, seven strikeouts, two hits and just two walks allowed in NC State’s 1-0 victory over the Commodores.

“You gotta give [Highfill] credit. He pitched a hell of a game. He mixed a fastball with two different breaking balls, he had a good move to first,” head coach Tim Corbin said after the loss. “If you are an offensive person, you want to hit yourself over the head with a shovel [at that game].”

Highfill’s defense behind him proved up to the task right from the opening batter of the game. Enrique Bradfield Jr. laid down a terrific bunt down the third-base line in the first at-bat of the game, but NC State third baseman Vojtech Mensik made an even better play to get the freshman All-American out at first. Aside from a Dominic Keegan single later in the inning, that would be Vanderbilt’s best offensive chance until the fifth inning.

Carter Young was the only Commodore to reach after the first until Javier Vaz broke the dry spell in the top of the fifth with a hard-hit single to right field with two outs, the final hit of the game for Vanderbilt. Game 1 hero Jayson Gonzalez was unable to do anything with the chance, however, as he grounded out to short to end the inning.

Despite a 20-pitch first inning, Leiter looked locked in from the jump, mowing down Wolfpack hitters with ease. NC State did not amass a hit or baserunner through the first four frames of the game as Leiter racked up nine strikeouts.

Simply absurd from the righty thus far. 32 pitches in 3 innings since his 20 pitch first. Time to get the bats going.

However, a familiar issue afflicted the sensational sophomore in the top of the fifth. Terrell Tatum—a Volunteer state native out of Collierville, Tennessee—tagged a fastball to right center for a no-doubt home run to break the 0-0 tie. It was the 13th home run Leiter has allowed on the season—despite allowing just 42 hits.

Vanderbilt’s offense was unable to pick Leiter up after the Wolfpack home run, as not a single baserunner reached in the sixth and seventh innings.

Leiter ran into a bit of trouble in the bottom of the seventh inning, allowing two weak singles and a walk to load the bases with one out. It was the first time a baserunner reached scoring position for either side. Pumped up on adrenaline, Leiter worked back-to-back strikeouts, hitting up to 95 MPH on the gun, to escape the jam.

Highfill worked into the eighth inning, but gave up a leadoff walk to CJ Rodriguez. Vaz bunted Rodriguez to second base, where Cooper Davis entered to pinch run. Evan Justice, a junior from Richmond, came in from the bullpen to replace Highfill.

Facing the Commodores’ best opportunity of the day, Justice was able to retire Gonzalez and Bradfield Jr. back to back to get out of the inning unscathed.

Mensik hit a single to lead off the inning for NC State in the eighth, however Leiter retired the next three Wolfpack hitters to complete his outing. In a valiant effort, the sophomore finished with a line of eight innings, 15 strikeouts, four hits, one earned run and just one walk. Leiter threw 123 pitches on the night.

“Jack was outstanding. He attacked, he threw strikes, he commanded the ball. He did everything he could to put his team in a position to win,” Corbin said. “One of the best performances I’ve seen in the times that I’ve been to Omaha.”

Carter Young worked a leadoff walk against Justice to kick off the ninth inning, but Dominic Keegan grounded into a double play and pinch hitter Tate Kolwyck struck out looking to end the game, a 1-0 victory for NC State.

“We have been in situations like this before,” Corbin said. “We have a resilient group and you have to be [resilient] to be here. I’m confident. I’m not guessing what will show up [on Wednesday], they will be motivated.”

With the loss, Vanderbilt will now face off with Stanford at 6 p.m. CDT on Wednesday, June 23 in an elimination game. NC State will play the winner on Friday, June 25 at 1 p.m CDT. It is the first time the Commodores have been shut out this entire season. Despite starting the 2021 season at 4-9, NC State has caught fire in the postseason and now won four straight games.