HERSHEY: Omaha is Leiter’s last chance to complete his legacy

Kumar Rocker has his College World Series, so do Carson Fulmer and Walker Buehler. It's time for Jack Leiter to go get his national championship and cement himself as a VandyBoys legend. 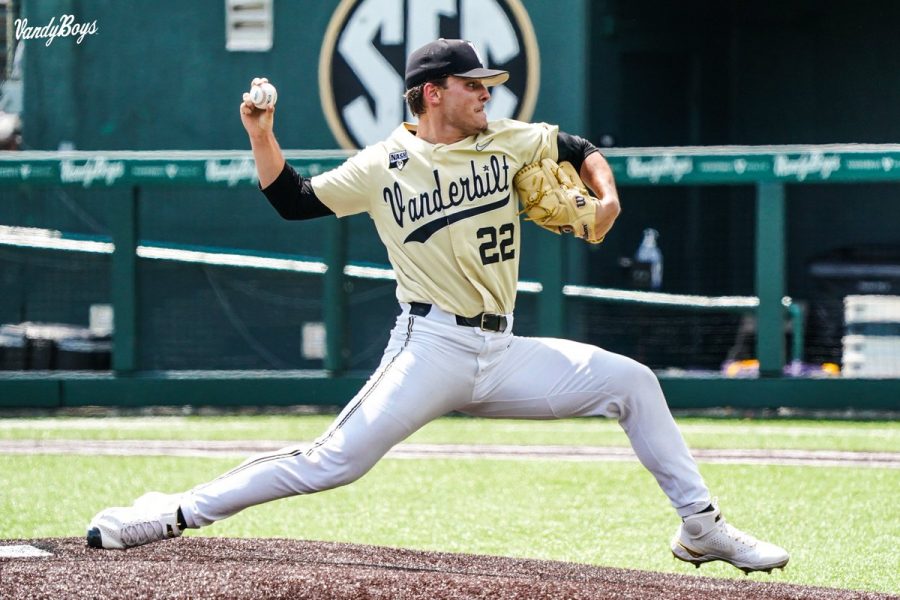 The younger Leiter neglected the opportunity to sign with his father’s former team, the New York Yankees, who selected him in the 20th round of the 2019 MLB Draft. He chose what some consider the unconventional route, but his decision epitomized the mature competitor that he is.

“There’s a lot of major league baseball players who have kids,” Corbin told the media on Friday. “I would tell you 90% of them never follow in their father’s footsteps because either they have had enough of it, they’ve seen it, they may not have the same passion as their mom or dad do about it. Jack is good at what he does because he is passionate about what he does. He loves it.”

The hard-throwing right-hander has emerged as one of the most coveted prospects in this year’s MLB Draft, and following one and a half masterful seasons on West End, he will not turn down the opportunity to achieve his ultimate dream this upcoming summer.

For nearly two decades, high school baseball recruits just like Leiter have pledged themselves to Corbin in lieu of immediately pursuing professional careers. They do so to develop, to grow off the field and to learn from some of the brightest minds in amateur baseball. But above all, they do so to win.

“This is why you come to Vanderbilt—for moments like this,” Leiter said after the team clinched a College World Series berth last weekend. “Honestly, the season would have felt incomplete if we didn’t make it this far.”

Incomplete is a daunting word that has different definitions for different players. Some come to Vanderiblt to merely elevate their skills to a minor-league level; some come to take advantage of a world-class education; and some come to emerge as college baseball legends. Few exit Corbin’s machine-like program “incomplete.” But for a player as talented as Leiter, without a College World Series to his name, he may do just that.

Hearing his name called in the first round of the MLB Draft on July 19 will not satisfy the All-American—if it did, he could have foregone college nearly four years ago and collected a sizable, seven-figure salary at 19 years old. Instead, Leiter came to Vanderbilt and following a dominant run as a VandyBoy, only one thing will consummate his college journey the right way.

Because last season’s College World Series was cancelled due to COVID-19, he has just one chance to make it happen; one chance to show that he is more than just an MLB talent; one last chance to demonstrate his ferocious “compete” and cement himself as a VandyBoys legend.

There is no doubt that Leiter was a stud from day one on West End, and he will be remembered as such regardless of what happens at the 2021 College World Series. He began his freshman season with five no-hit innings and 12 strikeouts in his first-ever outing and topped that performance time after time throughout his sophomore campaign. He threw a no-hitter against South Carolina on March 20 and delivered gutsy performances in two NCAA Tournament games, but he still awaits his final test.

If the season were to end today, he would rank third in Vanderbilt history in career ERA (2.09), be the nation’s 2021 strikeout king (156) and likely be regarded as one of the greatest VandyBoys aces to ever grace the turf of Hawkins Field. But his career would be incomplete.

As of Opening Day 2021, the Commodores boasted 13 active MLB players. Eight of them are pitchers. Four of them are College World Series champions. To solidify himself among legends such as Carson Fulmer, Walker Buehler, Tyler Beede, Mason Hickman—and Kumar Rocker—Jack Leiter needs to complete his season the only way a VandyBoys ace should: in front of fireworks peppering the Omaha skyline.

Each of these aces have had their niches. But what defines Leiter is his ability to stay poised, mature and leveled in even the most intense situations. The videos of him staring down batters while they step into the box, or his slight hop off the mound after a sweeping curveball are indicative of the unique persona that he brings to the game. He is built for the brightest lights at Omaha and can solidify his legacy with a College World Series win.

“He is the same everyday whether it is academically, socially or athletically,” Corbin said. “He is low maintenance, mature. He gets to the facility and it’s full on go. He’s wired to compete every single day. He has thrown himself into the group, he loves competing for the team, he is very protective of the team.”

Pitchers only take the mound once every five days. But in 2019, Vanderbilt fans witnessed how one pitcher can lift an entire team up en route to a College World Series. Rocker’s postseason dominance two years ago was something college baseball fans will never forget. From a no-hitter in the super regionals against Duke, to a 2-0 record in Omaha, Rocker propelled an entire team to college baseball’s ultimate glory.

Now, it’s Leiter’s turn and his test is that much harder. He has waited four years to play under the College World Series’ lights, but with his poise and maturity, he is more than capable of being the catalyst for a 2021 national championship.

The sophomore will take the ball on Monday, June 21, in Vanderbilt’s second game of the double-elimination College World Series. While the circumstances of that start are still to be determined, the significance of it for Leiter’s lasting legacy is undeniable.

“Going into the season there was some uncertainty around what the team was going to look like because we didn’t even have a season last year and some of the older guys from last year had left,” Leiter said. “To see the journey—the way it played out has been really special.”

Leiter has one last piece to fit into his special college baseball puzzle. He has embraced the roars of Hawkins Field, solidified his name in Vanderbilt’s record books and now, will have the chance to complete his legendary career with a College World Series trophy.