Three up, three down: Biggest questions for VandyBoys at the College World Series 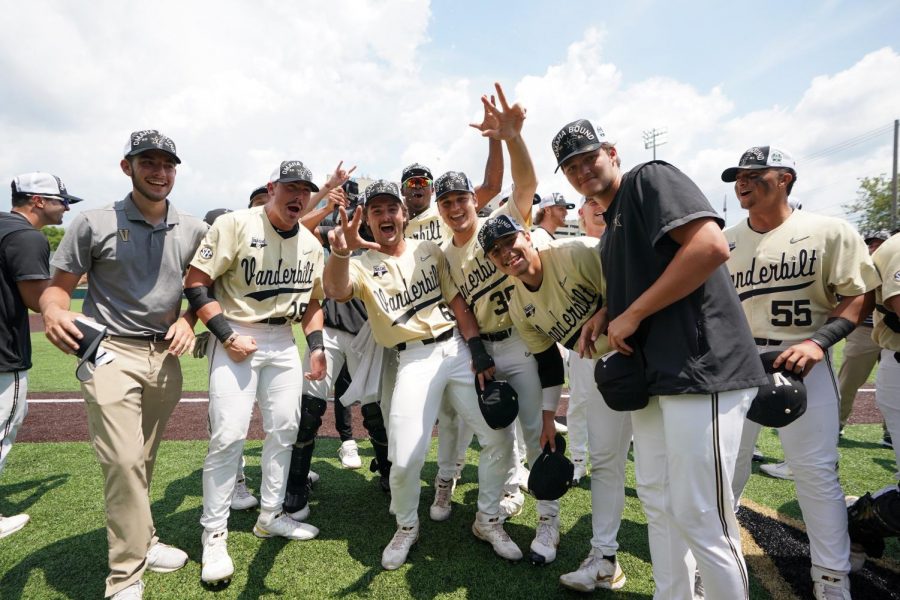 The Vanderbilt Commodores have once again advanced to Omaha, Nebraska, to compete in the College World Series. After sweeping their way through the Nashville Regional and handling East Carolina in the super regionals, the VandyBoys will be seeking their third National Championship in seven years.

The completion of super regional games on Monday finalized the bracket, with Vanderbilt’s first game set for Saturday at 6 p.m. CDT against Arizona. Stanford and North Carolina State round out Vanderbilt’s half of the bracket while Virginia, Tennessee, Texas and Mississippi State sit on the opposite side.

From a plethora of injuries to questionable pitching depth, there are plenty of storylines to track as the 2021 Commodores begin their final stretch of the season. Sports Editor Justin Hershey and Deputy Sports Editor Bryce Smith sat down to discuss each one in advance of the action from Omaha.
What is the biggest obstacle in Vanderbilt’s path to a College World Series?
Justin Hershey: Can I say health?

Look, Arizona is one of the best hitting teams in the country. As a squad, they are third nationally with a .329 batting average and lead the nation in doubles with 138. But Vanderbilt’s staff has faced one large issue this season: home runs. And the Wildcats are only 32nd nationally in that category. The Wildcats also don’t boast a starter with a sub-three ERA.

If I had to choose a team, I’d choose North Carolina State. Seven of the last ten College World Series finals have featured a non-regional host, and I could see that trend continuing after the Wolfpack’s huge upset in Fayetteville.

But Vanderbilt’s health is the key to this run. The Commodores will need a third starter to step up but Christian Little hasn’t pitched since May 26 after appearing to injure his thumb. Carter Young is slowly returning from a shoulder injury and Tate Kolwyck is still banged up with a hand problem. This group’s poor health has been well documented, but it still may be the difference between success and heartbreak in Omaha.

Bryce Smith: Well, when you reason it as well as you just did you can certainly say health. And I tend to agree with you—the biggest thing stopping Vanderbilt is, well, Vanderbilt.

At this point in the tournament every team is hot, but I’ll actually go with the other team out of the Pac-12 as the one that concerns me. Stanford beat Texas Tech by a combined score of 24-3 in two super regional games after a relatively easy regional run. They took two of three from UCLA, USC, Arizona and Oregon during the regular season and—like Arizona—are going to put runs on the board in Omaha.

That said, the VandyBoys have better arms than Stanford (and, uh, everyone else) and have shown the ability to be a very productive offense as well. Vanderbilt has shown they can win games against teams predicated on offense (see: the 14-11 win over Georgia Tech in extras in the regional) and quietly led the SEC in batting average and slugging percentage as a team. Like you said, Justin, it’s going to come down to the progression of Carter Young and Tate Kolwyck as well as the continued health of the rest of the group.

JH: Completely agree. Vanderbilt can stop Vanderbilt. Other than that, Tim Corbin’s squad is the favorite—and rightfully so. Stanford poses an interesting potential second-round matchup. Few schools in the country can top Vanderbilt in the classroom and Stanford is one of them. But this is Omaha and the Cardinal haven’t been to a College World Series since 2008. Give me the VandyBoys if that matchup comes to fruition.
Who should be the third starter and why?
BS: Christian Little. Period. End of story. While Patrick Reilly has been a bit steadier of late, at least steadier than he was earlier in the season, Little offers Vanderbilt potentially a third shutdown option in Omaha. I look at Little as a pitcher who could win you a game versus Reilly as more of an innings eater—and Omaha is about winning. Little flashed his elite ceiling in a valiant effort against Ole Miss in the SEC Tournament, when he tossed 5 ⅓ innings of one-run ball, allowing just three hits and striking out seven. I’ve been calling for this since about March; am I just biased Justin?

JH: I’m with you. This College World Series will mark the Christian Little coming-out party.

Little has battled through several different roles throughout this season. He has gone from out of the rotation in the middle of the season to pitching a gem in the SEC Tournament against Ole Miss. Unlike Kumar Rocker two years ago, Little was not thrown directly into the fire. He didn’t face an SEC opponent until late April and since surrendering six runs to Louisville on May 4, he has appeared twice, allowing just nine hits and two runs in ten innings of work. Plus, he doesn’t turn 18 until July. I can see the headline already.

BS: “17-year-old leads Vanderbilt to second consecutive College World Series.” Eh, we have time to come up with something more creative. But yes, you make another good point in that Little hasn’t had as much of an opportunity as Rocker did. I think that’s both a good thing and a bad thing. On one hand, there’s not a lot of data out there on Little and he’s more than fresh after not pitching at all during the tournament thus far. On the other hand, you wish he had a bit more experience during the season before heading to Omaha. That said, Little proved he can pitch on the big stage with his performance in Hoover. So here’s to hoping he can replicate it if Corbin calls his number in the College World Series.
What three bullpen arms do you trust right now?
JH: In the 2019 College World Series, Corbin relied almost exclusively on Jake Eder and Tyler Brown out of the bullpen. But for brief appearances from Zach King and Patrick Raby, Corbin had the luxury of two shutdown relievers. This year, I am not sure Corbs has two arms to turn to game after game.

However, the first two names here are pretty easy. Nick Maldonado and Luke Murphy have been go-to mainstays out of the bullpen throughout the postseason thus far. They haven’t been perfect by any means, but they are as good as the Commodores have entering this weekend. Maldonado has sunk his ERA down to 2.36 and notched three saves in Vanderbilt’s last four wins. Murphy has also been solid and it’s been exciting to watch him thrive after his battle with Tommy John surgery earlier in his career.

My third name may be bold, but I am going to go with Hugh Fisher. Fish hasn’t had his best stuff all year. He has only thrown 11 innings while allowing three earned runs. But I could foresee a scenario on Saturday where NC State’s best hitter Jonny Butler comes to the plate—a lefty who is batting .377—and Corbin leans on his senior southpaw.

BS: No, but my answer was going to be Maldonado, Murphy, then *gulp*. I’m not going to act like Fisher is a bad answer—and I think that’s likely the third reliever Corbin goes with because of the reasons you outlined—but it’s not one that necessarily gets me excited by any means. Fisher looked rough in the SEC Tournament and I’m just not sure he has enough control to really instill any confidence in himself—he threw ten walks in 11 innings this year.

Problem is, I’m not really sure who to choose—this is clearly Vanderbilt’s biggest concern in Omaha. I like what I’ve seen out of Nelson Berkwich (2.31 ERA), but he’s only pitched 11.2 innings all year. I almost want to go back on my answer from the last question and propose that Christian Little be the Andrew Miller of this bullpen for the CWS.

So, I think I’m going to lean that direction and pick a former starter who I know, at minimum, can throw strikes for Vanderbilt. Gimme Thomas Schultz, who was the third starter for a period of time and also threw in a couple of mid-week games. The sophomore has about as much experience as anyone in the pen and threw just 18 walks in 40 innings this season. Especially with Javier Vaz in left field, I like letting your defense do work behind you and avoid blowing up an inning with lots of walks and passed balls. If not Schultz, Patrick Reilly provides a similar option—if he’s not the Game 3 starter for Vanderbilt—as a long reliever who has experience and decent command.

JH: The Schultz pick makes sense to me. I think we will see Schultz in one way or another in Omaha. If Little’s first start goes badly, he may get the ball in the next third day spot if they advance far enough. I don’t see Reilly coming out of the bullpen, though. He hasn’t done it much at all this season to begin with and works better when he can get into a groove early. But this is Tim Corbin we are talking about. He has a knack for putting role players in perfect positions to succeed and maybe this is one of those situations for a young Commodore arm.