SMITH: Vanderbilt is, and always was, built for Omaha

Despite some turmoil during the season, the VandyBoys have proved why they were always built for postseason success. 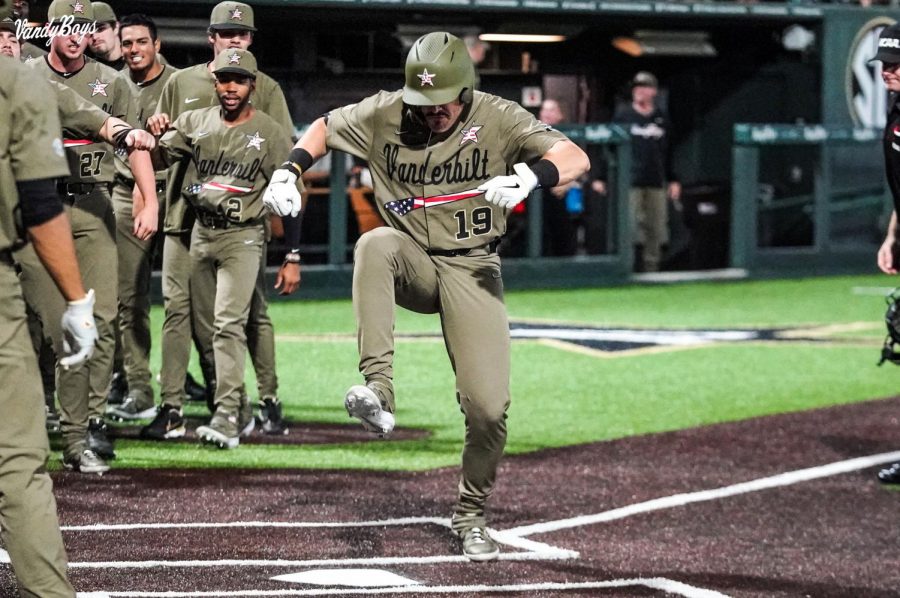 Though the expectation for Tim Corbin and Vanderbilt is always to advance to the College World Series in Omaha, there were times during the 2021 campaign that that goal looked somewhat in doubt. Amidst a five-game winning streak through the NCAA Tournament thus far, it can be easy to forget the Commodores’ three-game losing streak in the beginning of May or their home series loss against Georgia earlier in April.

Fresher in the memory of the Vanderbilt faithful is a series loss at Ole Miss and the recent unceremonious exit from the SEC Tournament in Hoover, Alabama, that left more than a sliver of uncertainty in the minds of Commodore nation.

Both Kumar Rocker and Jack Leiter encountered bumps in the road during the SEC schedule, with Rocker giving up six earned runs and three home runs in a home loss against Georgia and Leiter allowing five earned runs in four innings at Florida before getting shut down for a week.

A much more consistent issue was Vanderbilt’s inability to find a steady third starter, with the Commodores dropping six of their 13 losses in series finales.

Injuries were a big reason for this struggle to find a third starter. Corbin’s pitching staff battled through the absences of Michael Doolin, Ethan Smith, Sam Hliboki and Miles Garrett—all of whom missed most—if not all—of the season. Doolin was projected as Vanderbilt’s third starter in the preseason and Ethan Smith was a candidate as well after going 3-0 with a 1.42 ERA in 19 innings in 2020. In the bullpen, Hliboki didn’t allow a single run in 15 innings with 16 strikeouts in 2020 and Garrett had a 2.79 ERA in nine appearances before getting shut down for the season this year.

Injuries ravaged the offense too, with starters Cooper Davis (in the first game of the season), Isaiah Thomas, Carter Young and Tate Kolywck all missing extended time. As a result, Vanderbilt shuffled through multiple left fielders and designated hitters throughout the year, trying to find bench players that would rise to the occasion of being a starter.

However—in usual Tim Corbin fashion—the skipper has seemingly figured out how to solve each of Vanderbilt’s issues come NCAA Tournament time. Whether it be tweaks to the lineup, the benefit of extra rest or some classic Corbin small ball, Vanderbilt is playing their best baseball of the year in June. In doing so, they’re silencing any doubters about the 2021 squad along the way, proving that this roster was always destined for Omaha.

Postseason baseball emphasizes pitching and defense, and Vanderbilt has been tremendous in each of these regards in the NCAA tournament thus far. Thinking back to 2019, Vanderbilt’s national championship run featured strong starting pitching from Mason Hickman and Rocker, tremendous defense at premium positions and an offensive juggernaut led by JJ Bleday. This year, strong play in each of these areas combined with the momentum and time off this team has earned means that not only were the 2021 VandyBoys destined for Omaha, but that they are set up for success once they get there.
Strong Starting Pitching
The strength of the 2021 roster was always the elite starting pitching on the squad, headlined by future top-ten MLB Draft picks Kumar Rocker and Jack Leiter. Both have been absolutely dominant in the NCAA Tournament thus far, and if they continue along their current trajectory, Vanderbilt will be very difficult to knock out this weekend.

When Rocker struggled this season, it was with his command and giving up the home run ball. In addition, he had a slight velocity dip in the middle of the season, namely against Georgia. In that Georgia start on April 8, the right hander threw 100 pitches over just five innings and gave up three home runs.

“They landed a couple of punches in that first inning. They ambushed him—they took good swings at the fastball and their bats looked quick,” Corbin said at the time about Rocker.

For the Vanderbilt ace, this postseason has been about simplifying the approach to get back to what he does best: dominate hitters with a high-90s fastball and a devastating slider. Against Presbyterian, the junior mowed down hitters, tossing nine strikeouts in seven innings. Rocker also threw just 97 pitches, 60 of them for strikes. In his start against East Carolina, he was able to work into the eighth inning and threw an efficient 117 pitches (72 strikes) for such a long outing, striking out 11 along the way.

For Leiter, the biggest adjustment was getting time off, as the sophomore seemingly hit a wall during the middle of his first full SEC campaign. After an uncharacteristically difficult start at Florida (4 IP, 5 ER, 4 BB), Corbin had the No. 2 starter take a week off. Since then, Leiter is 3-1 with 51 strikeouts and just eight runs allowed across five starts. The sophomore hit 99 mph last time out against East Carolina and threw his changeup as well as he had all season in that performance. If Leiter can continue his torrid pace—and consistently mix in that changeup with his already devastating curveball and slider—at TD Ameritrade Park, then he’ll likely push his way into the top three of the MLB Draft come July.

Another added benefit of Rocker and Leiter firing on all cylinders heading into the College World Series is that it takes pressure off of the bullpen to do any heavy-duty lifting. The best version of Vanderbilt’s pitching rotation is when one of the two starters can go six to seven innings—which they both have in every tournament game thus far—and let Nick Maldonado and Luke Murphy finish the rest of the way. Both Maldonado (2.36 ERA) and Murphy (2.97 ERA) have been fantastic this season, but limiting their work so they can stay available for more games will be key for a thin Commodore bullpen.
Bench Emergence
Another massive reason that Vanderbilt is set up for success in Omaha is the boost they’ve received from their bench late in the season. While Corbin toyed with different lineups and defensive alignments all season long, it seems as though he’s settled on his permanent lineup just in time for the CWS. However, his decisions have been made easier thanks to the emergence of two bench players in particular.

Troy LaNeve became a late-season sensation for Vanderbilt starting with the Alabama series in early May. The sophomore has played in all 17 games since that May 7 series opener and has swatted five home runs and 16 RBIs in that time while hitting .319. With absences from a number of outfielders and a hole at DH throughout the year, LaNeve’s emergence has been huge for Vanderbilt. After cycling through Jack Bulger, Spencer Jones, Cooper Davis, Maxwell Romero Jr. and others at DH, Corbin finally found exactly what the Vanderbilt offense needed in LaNeve—a strong, middle-of-the-order lefty who can hit for both power and average. LaNeve got his opportunity because of injuries in the outfield, but he has stayed in the lineup because of his bat which makes Vanderbilt’s lineup that much more balanced and dangerous.

Somehow finding his permanent role even later in the season, Javier Vaz has been a postseason revelation for Corbin and the Commodores. The 5’9”, 151 lb. junior from LSU-Eunice Junior College has been one of Vanderbilt’s best players in the NCAA Tournament. Vaz hasn’t quite had the same amount of time in the lineup as LaNeve—he didn’t start in the SEC Tournament or against Presbyterian—but his impact has been just as profound.

For one, Vaz has provided another lefty bat with more consistency than fellow lefty Spencer Jones or righty Jack Bulger. Vaz is now hitting .300 for the season and has collected four hits and scored three runs in the last five games. Perhaps even more importantly, Vaz has affected the game in every other way possible.

On defense, he’s a perfect fit alongside Enrique Bradfield Jr. in left field and flashed his combination of elite acceleration and anticipation over the weekend against East Carolina. Vaz is by far the best defensive option Vanderbilt has tried in left field this season, which will be even more important in TD Ameritrade Park—a stadium traditionally known to “play big.”

M4: Javier Vaz does in fact lay out for those. Huge grab from the left-fielder to help end the inning. GT picks up one but no further damage.

Vaz, Keegan, Thomas due up for Vanderbilt

Further, his offensive approach complements the freshman All-American Bradfield Jr. perfectly in the lineup. Vaz’s offensive arsenal is predicated on contact, speed, baserunning and bunting—which mirrors Bradfield Jr. and creates a situation in which it becomes much easier for Vanderbilt to manufacture runs in innings in which both players bat. Together, Bradfield Jr. and Vaz contributed two runs over the weekend against East Carolina. By simply being on the field, Vaz focuses Vanderbilt’s attention on small ball and defense— hallmarks of the Corbin era and of College World Series winners in years past.

Lastly, Vaz has seemingly been a spark plug for the Commodores. The animated junior has been clutch at the plate, made diving stops and done backflips before every game over the course of the postseason, energizing the entire Vanderbilt unit.

The emergence of both LaNeve and Vaz gives the Commodores even more reason for confidence in Omaha, even as Kolwyck remains sidelined by a hand injury. Their elevated play leaves Vanderbilt with its most set-in-stone lineup of the season and just one thing left to do at the College World Series: win.