Vanderbilt outlasted Georgia Tech on Saturday behind a solid performance from Jack Leiter. 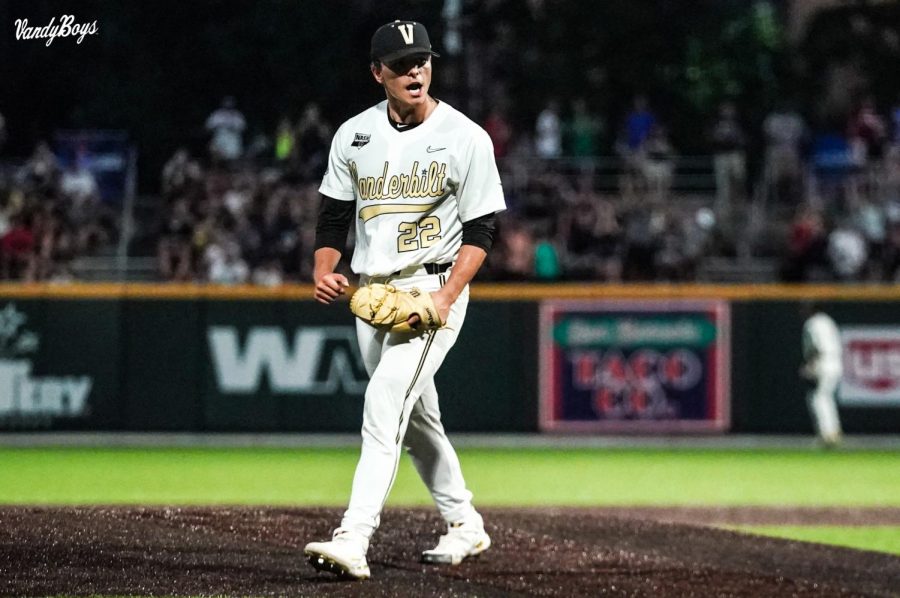 It wasn’t a particularly well-played baseball game from either side Saturday night, but No. 1 Vanderbilt outlasted No. 2 Georgia Tech 4-3 behind a big fourth inning. Sophomore sensation Jack Leiter made his first NCAA Tournament start for the Commodores and picked up the win, throwing 11 strikeouts over six innings while allowing just one earned run. Marquis Grissom Jr. took the loss for Georgia Tech, allowing 2 earned runs over 4 ⅓ innings of work.

Leiter settled into the regional matchup nicely, going three up, three down in the top of the first. Grissom Jr., who came into the contest with a 6.49 ERA on the season, allowed two walks to Javier Vaz, starting in place of the banged up Tate Kolwyck, and Dominic Keegan, but Isaiah Thomas grounded into a double play to end the first inning.

Leiter continued to cruise along through the second inning, as he struck out three of the first six batters he faced, only allowing one baserunner via a walk in his first two frames of work. Vanderbilt ended the second inning the same way they did the first, with Carter Young grounding into a double play to get Grissom Jr. out of the inning.

Finally, in the top of the third inning the Yellow Jackets notched the first hit of the game for either side, as Austin Whilite ripped a one-out double down the third-base line. Leiter battled through the next two Georgia Tech hitters to get out of the inning, but began to run up his pitch count against some competitive at-bats from the Yellow Jackets. The Vanderbilt ace sat at 60 pitches through three innings of work. The Commodore offense stayed quiet through the third inning, going 1-2-3 in the bottom half of the inning.

Georgia Tech was the first team to put a crooked number on the scoreboard as Kevin Parada launched a home run to left center off of a Leiter fastball to make the score 1-0. Leiter recovered quickly, getting former Commodore Justyn Henry-Malloy to ground out. Left fielder Javier Vaz pitched in to help Leiter with a fantastic diving catch to swing a bit of momentum back to the Commodores.

“We recognize that [Vaz] can play defense. He’s kind of a gamer,” Corbin added on Vaz’s diving play.

M4: Javier Vaz does in fact lay out for those. Huge grab from the left-fielder to help end the inning. GT picks up one but no further damage.

Vaz, Keegan, Thomas due up for Vanderbilt

The Vanderbilt offense finally got going in the bottom of the 4th, sparked by the energy from Vaz’s big play in left. Keegan reached on an error from Henry-Malloy at third base, then Troy LaNeve was hit by a pitch to put runners on first and second for Vanderbilt. CJ Rodriguez then came through with a near home run that resulted in a double, scoring Keegan. Grissom Jr. then threw a wild pitch that brought in LaNeve from third to give the Commodores a 2-1 advantage that they would not relinquish.

Leiter had his best inning of the night in the top of the fifth, striking out the side to bring his total to nine on the evening. Two errors by Georgia Tech in the bottom half of the inning plated two more Commodores, as Jayson Gonzalez and Enrique Bradfield scored to give Vanderbilt a 4-1 lead.

Leiter threw his final inning of work in the sixth, tallying two more strikeouts to reach 11 on the night. His final inning was not without trouble though, as an error, walk and lengthy review of another near error from the Commodore defense forced Leiter to labor to get his final three outs. He finished with 112 pitches through six innings.

“[Leiter] has had some very tough-pitched games in the SEC. He did the same thing today; he’s always going to compete and he gives your ball club a chance to win. He certainly left his team in a great position,” Corbin said.

The relievers from both sides found immediate success as Vanderbilt went 1-2-3 in the bottom half of the sixth and seventh innings against freshman left hander Dalton Smith. Georgia Tech sandwiched those frames with a 1-2-3 inning of its own against Commodore freshman Nick Maldonado in the top of seventh. The eighth inning was relatively quiet for both sides as well, with just one baserunner for each team.

After cruising through the seventh and eighth innings, Maldonado ran into a bit of trouble in the top of the ninth. Henry-Malloy grounded out to start the inning, but then Maldonado hit Georgia Tech’s Andrew Jenkins to put a runner on. He struck out the next Yellow Jacket hitter, but designated hitter Drew Compton launched a ball over the right-field bleachers to bring Georgia Tech within one run in the top half of the ninth, 4-3. Maldonado was able to strike out the next batter to preserve the lead and earn the save for Vanderbilt.

All in all, it was an odd game with almost as many combined errors as hits from the two teams, but a game that Vanderbilt will take at this stage of the postseason. Not only did Leiter get back in the win column for the Commodores, Vanderbilt also advanced along in the winner’s bracket of the Nashville Regional, which means they will have to be beaten twice over the next two days in order to be eliminated. Both Indiana State and Georgia Tech, now with one loss apiece, will not have that same luxury, which gives Vanderbilt a major advantage at this point in the weekend.

“We won. Bottom line. We hit some balls hard, but it was just one of those games. We did what we needed to do pitching-wise and defensively to get a positive outcome and that’s all that matters,” Corbin said after the game.

The Commodores will play again tomorrow night at 8 p.m. CDT against the winner of Indiana State and Georgia Tech, which will be played earlier in the day at 2 p.m CDT. A win would advance Vanderbilt to the Super Regionals, where they would face the winner of the Greenville Regional. Coach Corbin mentioned postgame that it is still to be determined who takes the bump for Vanderbilt tomorrow evening.