The Commodores struck for six runs over the first two innings to give themselves a comfortable lead that they never surrendered. 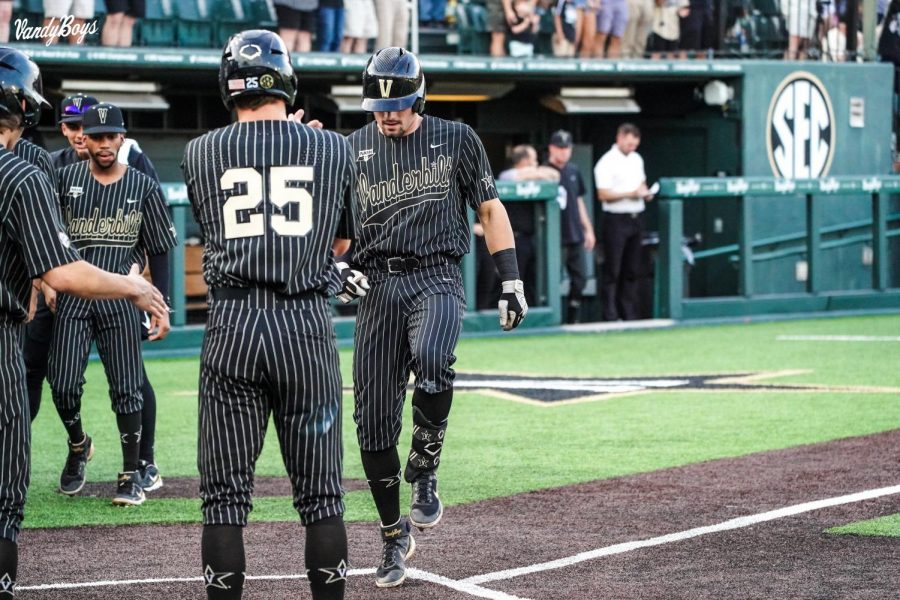 “These games are very tricky. You can look across the country and see very good teams throughout the year that struggle in these [regional] games and I thought we were very clean,” Corbin said after the game. “I thought that was a well-played game all the way around.”

The Nashville Regional began with a bang Friday afternoon as No. 2 Georgia Tech notched five seventh-inning runs in a 7-6 comeback win over No. 3 Indiana State. The No. 1 seed Commodores then took care of business over No. 4 Presbyterian in the nightcap.

“He threw a lot of strikes, he attacked the strike zone, got ahead with his fastball. There were very few times he did get to 3-2 but when he did get to 3-2, he won that count,” Corbin said. “I thought it was a well-pitched game.”

The Blue Hose remained hitless until the top of the fourth inning, when junior Eric Toth lined a double over the head of Troy LaNeve in left field. But Rocker comfortably escaped the inning with a pair of his nine total strikeouts. He allowed just one more Presbyterian hit over seven clean innings while walking just two on 97 total pitches.

A single from Enrique Bradfield Jr. got the day started for the VandyBoys and was one of six Commodore hits in the first two innings. Dominic Keegan then doubled and after Tate Kolwyck was hit by a pitch, Troy LaNeve kept his bat hot. The sophomore ripped a 3-1 pitch to deep right field for a bases-clearing double to put the Commodores up 3-0 early.

Vanderbilt continued to pile on in the second inning. With two runners on base and two outs, Keegan launched his second of three hits on the day—a three-run home run to left field—to give the Commodores a commanding 6-0 lead. LaNeve and Keegan fueled Vanderbilt’s offense all night long, totaling nine of the team’s ten RBIs on four combined extra-base hits.

Keegan now 2-2 with a 2B, HR and 3 RBIs through two innings in this one. pic.twitter.com/yxmMsXfjUk

Righty Alex Flood relieved McDaniel and kept the Commodore offense at bay for three innings until Keegan and LaNeve struck again. Keegan ripped his second homer of the game and 13th of the season to deep center field to put Vanderbilt up 8-0. LaNeve then ripped an RBI single to score the Commodores’ ninth run of the evening.

B7: Dom Keegan launches his second homer of the game and his third XBH of the night! 5 RBIs for Keegan as the Commodores add to their lead.

Thomas Schultz relieved Rocker in the eighth inning, striking out one in a single inning of work. Isaiah Thomas then notched Vanderbilt’s final run of the night on a bloop RBI single to left field in the bottom half of the eighth inning.

Reliever Ethan Smith made his first appearance since April 3 in the ninth inning. He fanned two Presbyterian hitters in just one inning of work, topping his fastball out at 95 MPH. Corbin acknowledged both Schultz and Smith after the game, explaining how important it was for them to get into a rhythm and maintain low pitch counts.

“Schultz threw a lot of strikes, Smith did the same thing. That was exactly what those two needed,” Corbin said. “Good contributions from them. It’s good that they minimized their pitch counts so we can return them at some point in time, but that was very positive.”

While shortstop Carter Young returned to the field for the first time in six games, Vanderbilt infielder Tate Kolwyck exited the game in the seventh inning after attempting to slide headfirst into second base. Kolwyck appeared to injure his left hand and is the latest addition to a long list of injured Commodores. Corbin did not offer any updates on Kolwyck after the game.

No. 4 Presbyterian will now battle No. 3 Indiana State at 1 p.m. CDT on Saturday in an elimination game before No. 1 Vanderbilt and No. 2 Georgia Tech square off at 6 p.m. CDT in the winner’s bracket.