The Hustler dives into the regional format, schedule and gives a rundown on each team before the first games begin on Friday, June 4. 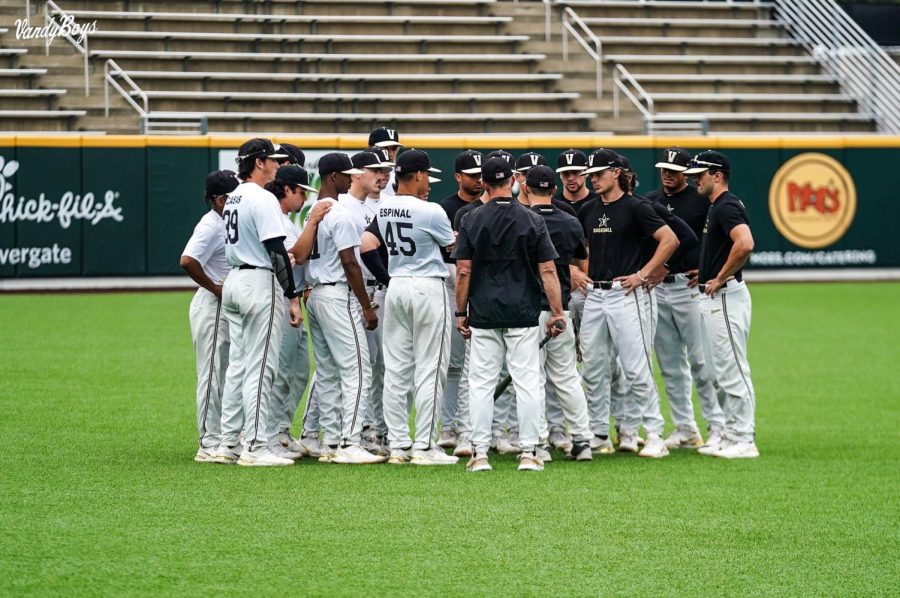 Vanderbilt will begin its quest for back-to-back College World Series' on Friday against Presbyterian. (Twitter/@VandyBoys).

Vanderbilt baseball will begin its defense of its 2019 NCAA Tournament title on Friday, when it hosts Presbyterian in Vanderbilt’s first game of the Nashville regional. Vanderbilt was tabbed as one of 20 potential host sites by the NCAA back on May 14 and was officially selected as a host site on May 31. Along with hosting a regional, Vanderbilt earned the No. 4 overall national seed in the tournament.

The 64-team NCAA Tournament field features 16 regional tournaments hosted by the top-16 seeds. Regionals are composed of four teams who play in a double-elimination “mini-bracket” with one winner advancing to the super regionals.

In the Nashville regional, Vanderbilt is seeded No. 1 and hosts the No. 2 Georgia Tech Yellow Jackets, No. 3 Indiana State Sycamores and No. 4 Presbyterian Blue Hoses.
No. 1 Vanderbilt Commodores
No. 1 Vanderbilt Commodores (40-15, 19-10 Southeastern Conference) head into the Nashville regional having dropped their last two games, including a loss to Ole Miss that knocked them out of the SEC Tournament in the fourth round. The Commodores have struggled offensively to close the season, despite producing multiple crooked number run totals in prior games. Vanderbilt will lean on the presence of first baseman Dominic Keegan, speedy centerfielder Enrique Bradfield Jr. and right fielder Isaiah Thomas among others to help provide much-needed run support. On the mound, Vanderbilt will look to aces Kumar Rocker and Jack Leiter to set the tone in the first games of the regional.
No. 2 Georgia Tech Yellow Jackets
The No. 2 Georgia Tech Yellow Jackets (29-23, 21-15 Atlantic Coast Conference) bring multiple intriguing storylines to Nashville. They reached the NCAA Tournament by way of an at-large bid, earned in part thanks to victories over Clemson and Louisville in the ACC Tournament. Third baseman and Vanderbilt transfer Justyn-Henry Malloy leads the Yellow Jackets in home runs (10) and RBIs (39) to go along with a .290 batting average. He was also named a 3rd-Team All-ACC selection. Right-handed relief pitcher Chance Huff will also be making his return to Hawkins Field after transferring from Vanderbilt last season. He is sporting a 10.29 ERA on the year in 19 appearances out of the bullpen. Georgia Tech will most likely start left hander Brant Hurter (5-4, 3.74 ERA) in game one when it battles Indiana State on Friday, June 4.
No. 3 Indiana State Sycamores
The No. 3 Indiana State Sycamores (30-19, 14-10 Missouri Valley Conference) reached the NCAA Tournament via an at-large bid, finishing up 3-2 in their conference tournament. Indiana State features a top-heavy lineup not dominated by power hitters but instead focused on getting on base and driving in runs with timely hits. The Sycamores showcase power-hitting Catcher/Designated Hitter Max Wright, who has hit 16 home runs this year as well as leadoff man and shortstop Jordan Schaffter, who can steal bases if he gets on. A win for Vanderbilt over Presbyterian would mean the Commodores would most likely avoid ace Geremy Gurrero in game two who is sporting a sub-two ERA in 13 starts.
No. 4 Presbyterian Blue Hose
The No. 4 Presbyterian Blue Hose (22-21, 18-16 Big South Conference) will be Vanderbilt’s first opponent in the Nashville Regional. Vanderbilt head coach Tim Corbin formerly coached the Blue Hens as they transitioned from NAIA to NCAA Division II and he amassed a 106-138 record as skipper. As for the 2021 team, the Blue Hose won the Big South’s automatic bid in its conference tournament. Presbyterian will most likely throw starter Charlie McDaniel, who boasts an 4.80 ERA for a pitching staff with an overall ERA above six. Similar to Indiana State, Presbyterian features a lineup heavy at the top, with outfielder Zacchaeus Rasberry leading the team with ten home runs and a .577 slugging percentage.

In the first game, Indiana State will play Georgia Tech at noon Friday. Vanderbilt will follow that night against Presbyterian on SEC Network at 6 p.m CDT.