The Vanderbilt Hustler • May 30, 2021 • https://vanderbilthustler.com/2021/05/30/vanderbilt-announces-goal-to-achieve-carbon-neutrality-via-climate-vault-partnership-faces-backlash-from-dores-divest-and-divestvu/

Successfully collaborating with Climate Vault would make Vanderbilt the first member of the Association of American Universities to achieve carbon neutrality. 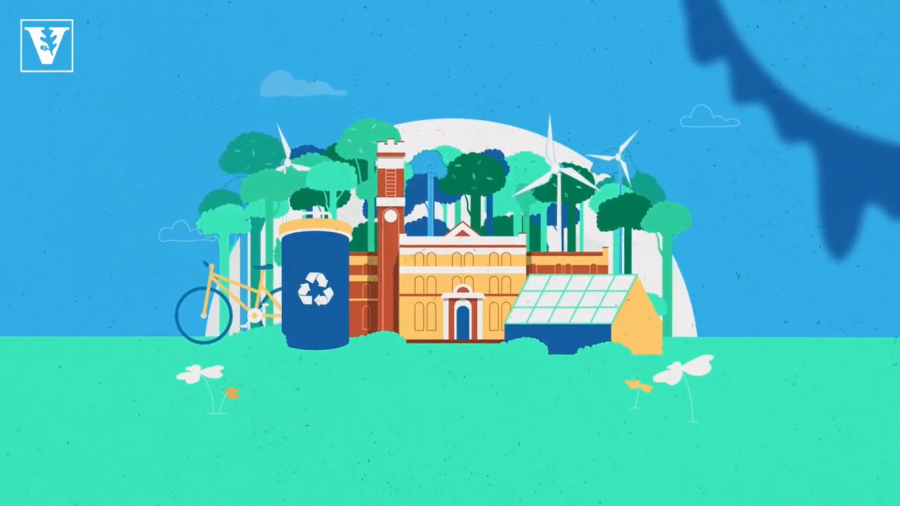 Screenshot of Vanderbilt's YouTube video about their partnership with Climate Vault, taken on May 30, 2021. (Hustler Staff/Rachael Perrotta)

Vanderbilt announced via email on May 24 that it will be collaborating with Climate Vault to reduce the university’s carbon footprint.

Climate Vault is a non-profit organization that aims to minimize carbon emissions worldwide by purchasing carbon permits from cap-and-trade markets. The announcement explains that the U.S. government sets a “cap” on the number of greenhouse gasses that are allowed to be emitted into the air. To enforce this cap, the government sells permits allowing the holder to emit a certain amount of carbon. Since there are a limited number of permits available to buy, less carbon dioxide is emitted into the atmosphere with each purchase by Climate Vault.

Diermeier served as provost, among other positions, at the University of Chicago from 2016 to 2020.

Chancellor Daniel Diermeier said in the announcement that Vanderbilt’s collaboration with Climate Vault will make the university a sustainability leader over other schools.

“[It] would allow us to become the first member of the Association of American Universities’ 65 leading research universities to achieve carbon neutrality,” Diermeier said in the announcement.

However, Miguel Moravec, a first-year Ph.D. student affiliated with Dores Divest, does not believe that the partnership will result in a greener campus.

“The fact that Vanderbilt continues to bet tens of millions of tuition dollars on the growth of oil stocks speaks volumes about how ineffective Climate Vault really is, which, at best, just redirects GHG pollution away from a few liberal states,” Moravec said in a message to The Hustler.

Moravec also predicted that the university’s financial reports will reveal concerning figures regarding the effectiveness of Climate Vault.

“Pay attention to Vanderbilt’s FY21 financial report—we expect that Vanderbilt will make a killing this year off of fossil fuels, easily dwarfing the measly 1.2 million [dollars] they donated to Daniel [Diermeier]’s friend in Chicago to fund [Vanderbilt’s partnership with] Climate Vault,” Moravec said.

DivestVU, another organization on campus focusing on divesting from fossil fuels, also argues that Vanderbilt’s partnership with Climate Vault will prove unsuccessful. DivestVU believes that purchasing permits from cap-and-trade markets is not an effective way to achieve carbon neutrality.

“While [companies like Climate Vault] often market that these permits reduce total carbon emissions, that is not often the case,” DivestVU said in a message to The Hustler. “Instead of divesting fully from fossil fuels, Vanderbilt has chosen to instead spend money on pollution allowance permits which does not incentivize them to reach emissions reduction targets in the future.”

DivestVU believes that by partnering with Climate Vault, Vanderbilt is simply avoiding larger issues in the realm of sustainability.

“This proposed solution does not hold the university accountable to our other peer institutions that have already divested (fully or partially) [from fossil fuels] and fails to consider the requests of over 2000 undergraduate students to divest from the fossil fuel industry,” DivestVU said. “DivestVU will continue to advocate for full divestiture from the fossil fuel industry and push Vanderbilt to consider the social, financial, and environmental harms of relying on programs such as Climate Vault.”

Students Promoting Environmental Awareness and Responsibility (SPEAR) did not respond to The Hustler’s requests for comment about Vanderbilt’s collaboration with Climate Vault.

Aside from their new partnership with Climate Vault, Vanderbilt and FutureVU have recently made other commitments toward a more sustainable campus. Three of the university’s seven goals for a greener campus include investing in sustainable infrastructure, green spaces around campus and off-site large-scale renewable energy. The other four goals involve investing in on-site clean energy, decreasing the carbon footprint created by vehicles, reducing consumption and waste and investing in innovative collaboration.