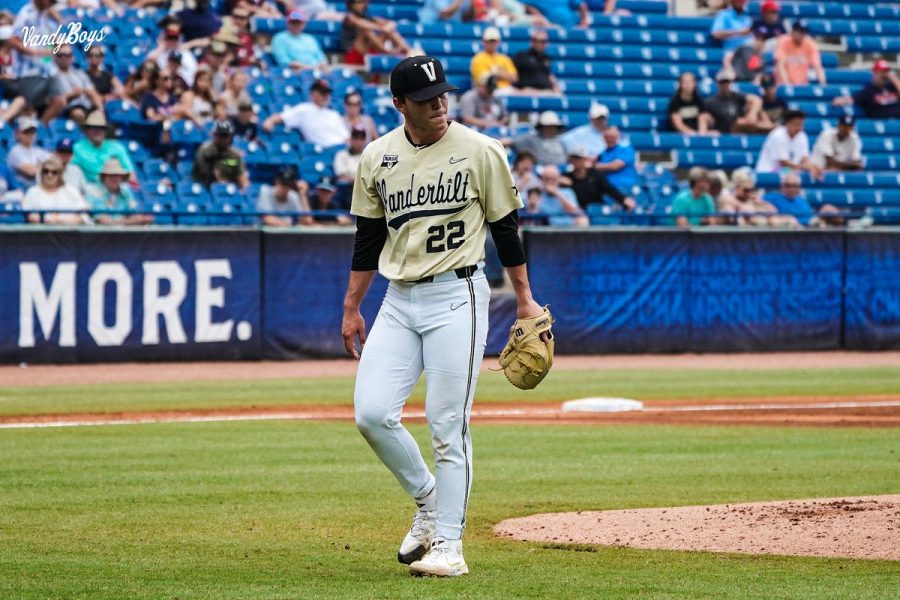 The Commodores were eliminated from the SEC Tournament by Ole Miss on Friday. (Twitter/@VandyBoys).

Vanderbilt’s bid to repeat as SEC Tournament champions came to an end on Friday as the Commodores were beaten handily by the Ole Miss Rebels, 4-1. The two squads that squared off in the 2019 SEC Championship game faced each other for the fifth time this season Friday, and it was the Rebels who got the best of the Commodores for the third time this spring. The squad’s SEC season officially came to a close with the loss. Head coach Tim Corbin’s team finished the complete conference slate with a 20-12 record.

“We have put ourselves in some good situations, a very consistent body of work for what is an inexperienced group in a lot of different ways,” Corbin said after the game. “We are happy and proud of them. Certainly wish we could have stayed here a little bit longer, but we played a lot of good baseball teams.”

Ole Miss starter Tyler Myers (W, 4-2) had a career day in the victory. The righty had previously given up runs in nine of his 18 appearances, but could not be stopped on Friday. He went seven innings, striking out six Commodores and giving up just one run on just five hits. Myers dominated from start to finish, painting the inside corner with fastballs that the Commodores simply could not barrel up.

Four of the Commodores’ six total hits were tallied in the first and third innings, but Vanderbilt came away with nothing to show for its quick start at the plate. Enrique Bradfield Jr. and Isaiah Thomas led off the game with back-to-back singles and despite reaching base with no outs, neither runner advanced any further.

“We crashed the first inning. We chased some balls that were well off the plate, [we] got a little bit anxious,” Corbin said.

The third inning was much of the same as Bradfield Jr. and Dominic Keegan registered singles but were stranded on base. In all, the Commodores left seven runners on base on Friday.

Jack Leiter (L, 8-3) got the ball for Corbin and the Commodores on day three in Hoover. The sophomore had himself a solid day, lasting six-plus innings despite a 32-pitch second inning.

After cruising through the first, Leiter allowed the Rebels to strike in the second. Similarly to Rocker on Thursday, the Vanderbilt ace lost his control in second frame, walking two and hitting one batter. After a Leiter walk let in the game’s first run, Ole Miss’ Calvin Harris knocked in one more with a sacrifice fly to make the score 2-0.

Leiter slowly settled into a groove. He retired the Rebels in order in the fourth and fifth innings using a fastball that hovered around 97 MPH. But Ole Miss got one more run off of the sophomore in the seventh inning. A walk, a steal and a single limited Leiter’s day to 6.2 innings. He struck out eight Rebels using 105 total pitches and but for the second inning, limited his pitch count and found solid control.

“He pitched well today. The second inning was tough, but outside of that he responded well. He threw a lot of pitches that second inning so his ability to be efficient from that point forward and get us deep into the ballgame was very effective,” Corbin said. “He did what he needed to do to keep his team in a ballgame. I think he’s been good and he’s going to be good moving forward.”

Nick Maldonado relieved Leiter and although he escaped the seventh and pitched a clean ninth, Ole Miss’ Kevin Graham got the best of the Vanderbilt reliever in the eighth. Graham ripped his 14th home run of the year to give the Rebels a more-than-comfortable 4-0 lead against the struggling Vanderbilt lineup.

Vanderbilt’s bats were quiet all afternoon. The Commodores added their one and only run of the game in the eighth, but squandered the chance to add more. After a leadoff double from Javier Vaz, followed by a walk and a single from Thomas, the Commodores had the bases loaded with no outs. But Keegan grounded into a double play to score just one runner and limit the damage for Ole Miss. The Commodores’ 3-6 hitters combined to hit just 1-11 with two strikeouts on the day.

After losing consecutive games to Arkansas and Ole Miss, Vanderbilt’s SEC Tournament run has ended. The Commodores will now wait until NCAA Regional selections are made on Monday to know their next opponent. NCAA Regionals will begin on June 9 and Vanderbilt is expected to host a regional in Nashville.

“[My confidence level is] good. You’ve got to get by this game first. Anytime there is an ending point in a tournament, you are not really feeling your best,” Corbin said. “[But] as we get into Saturday and Sunday, re-equip ourselves Monday—you see the selection show, see where you are—it rejuvenates you in a lot of different ways. We are confident. We have played a lot of good baseball.”