The Commodores were well represented at the NCAA Championship in Scottsdale, Arizona, as Celina Sattelkau and Louise Yu both competed in the individual competition. 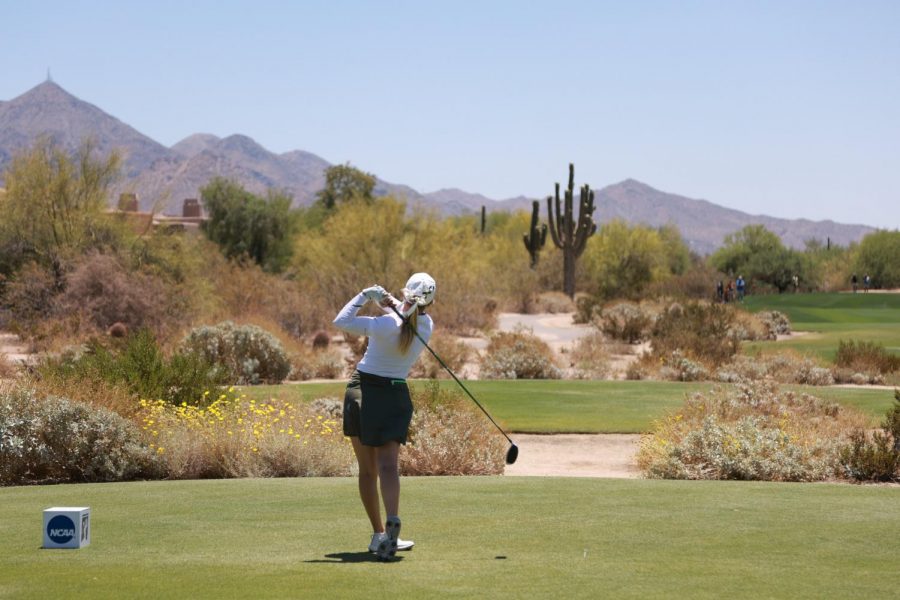 The individual portion of the NCAA women’s golf championship in Scottsdale, Arizona, wrapped up on Tuesday, with Stanford’s Rachel Heck taking home the National Championship trophy.

Although Vanderbilt was not included in the 24-team field, the Commodores were still well represented in Scottsdale. Senior Louise Yu and sophomore Celina Sattelkau both qualified for the individual competition and competed among the nation’s best in stroke play this past weekend.

Before the National Championship began, the Commodores competed in the Columbus, Ohio NCAA Regional competition as the No. 6 seed. But after finishing eighth in the 18-team regional field, they did not qualify for the team portion of the NCAA Championship in Scottsdale.

However, after three rounds in Columbus, Yu (+1 overall) and Sattelkau (+2 overall) finished tied for fifth and tied for 11th respectively, earning themselves spots in the National Championship’s individual competition. Beginning on May 21, they played alongside 130 players from around the country at Grayhawk Golf Club in Scottsdale.

“Obviously, you want to be there with your entire team. And if you can’t do that, having an individual is the next best thing,” head coach Greg Allen said. “So having two [individual participants] was just an added bonus and just a great learning experience for both of them.”

Both Yu and Sattelkau began their tournaments with solid 75s (+3). Yu’s day began smoothly as she carded an even-par 36 on her opening nine holes that included her lone birdie of the day on the par-5 18th. Three bogeys on her second nine left her 3-over after day one. Sattelkau registered an impressive 15 pars in her first round. But for an unfortunate triple-bogey 7 on the sixth hole, she may have been even for the day.

On day two, Yu and Sattelkau moved in opposite directions. Yu carded an uneventful 77 (+5) featuring six bogeys and one birdie, while Sattelkau notched her best round of the championship.

With four birdies—including one on the par-three 13th hole—and just one bogey, she totaled an impressive 69 (-3) that put her in a tie for 23rd overall. She kept the ball out of the rough off the tee and set herself up with a number of short birdie putts throughout the day.

Celina is heating up in the desert. 🔥

Birdie on 13 moves her to 3-under-par for the day and into the top 🔟#AnchorDown pic.twitter.com/C38hh1WBzs

“I was really able to manage my mistakes [in round two] and make good mistakes in order to reduce my bogies and let my birdies show,” Sattelkau said. “Good course management—which I had that day—and hitting it close to the flag made it possible for me to shoot that low.”

Allen, who walked each round alongside Sattelkau advising her where appropriate, credited her putting as the key to her impressive second round.

“I think we did a better job of reading the greens that day,” Allen explained. “Her ball-striking was really good that day and just making some putts that she had trouble with the other days was the key that round.”

The third day ended up being Yu’s last of the tournament. The senior followed up a second-round 77 with a third-round 78 (+6). A triple-bogey on the par-5 fourth hole derailed her round and she was unable to get inside of the cut line. Yu finished the tournament tied for 97th.

After an impressive second-round 69, Sattelkau’s third-round 75 (+3) was enough to help her make the cut and enter the final round of competition in a tie for 23rd. Her third round featured more consistent play and two birdies on holes two and 14.

Her fourth and final round proved to be a challenge. Despite three birdies on day four, the sophomore finished her tournament with back-to-back double-bogeys on 17 and 18 to finish with a final-round 79 (+7).

“For all four days, Celina played a lot better than her score shows. I think she hit a lot of good shoots and caught some bad breaks which can happen in desert golf,” Allen said. “Not the finish that she wanted but overall, just a really neat experience for both Louise and Celina.”

Sattelkau’s final-round 79 dropped her into a tie for 53rd overall with a final score of 298 (+10). But after hardly playing her freshman season, the native of Germany took home All-SEC honors earlier this spring, finished outside of the top-11 in just two tournaments all year and culminated her season with a top-60 finish in the National Championship.

Allen’s team has now completely wrapped up its season. Sattelkau, a rising junior, will be back next season. She will join rising senior—and US Women’s Open participant—Auston Kim and Yu, who Allen is excited to have back next season as a fifth-year senior.

“We had room for Louise, so she is coming back for her fifth year with us. We are really excited about it,” Allen said. “Louise’s and Celina’s experience will really be key for us.”

The disappointment of not making it to the NCAA Championship was real for the Commodores. But with a number of key players returning, the future is bright for Vanderbilt women’s golf.

“I’m really excited. Even our two freshmen [Ariel Yu and Virginie Ding] who didn’t get a ton of experience for us—I think they could even be in our lineup,” Allen explained. “I’m just excited about what we can do next year.”