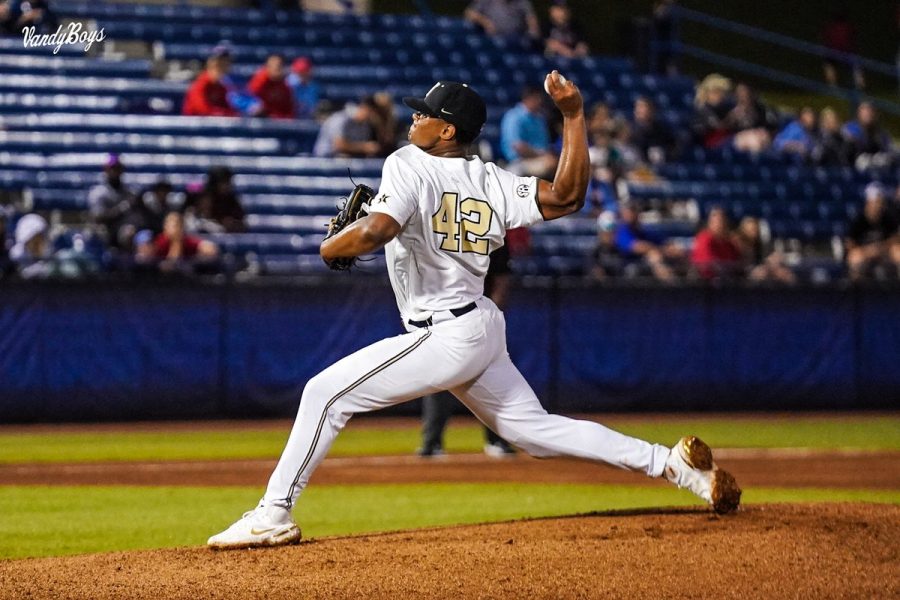 Two years ago, the Vanderbilt Commodores walked off Ole Miss to win the program’s third SEC Tournament title. Late on Wednesday night, with a different group of players and different set of circumstances, the VandyBoys once again sent Ole Miss home from The Hoover Met shocked. The fifth-seeded Rebels entered the ninth inning with a 4-3 lead, but timely hitting and sound base running propelled the fourth-seeded Commodores to a thrilling victory.

CJ Rodriguez began the rally by blooping a leadoff single into left field. Javier Vaz then pinch ran for Rodriguez and after an Enrique Bradfield Jr. walk, Isaiah Thomas tied the game at four with a ground ball single through the left side.

Dominic Keegan then stepped to the plate with runners on first and second base. An Ole Miss passed ball during Keegan’s at-bat enabled Bradfield Jr. to advance to third. Then, Keegan delivered. He slapped a line drive single into right field to score Bradfield Jr. and at 12:33 a.m. CDT on Thursday morning, Vanderbilt secured the second round victory.

“If you can’t compete within this league, then you are probably not going to last very long. We have had a lot of good battles with a lot of SEC teams throughout the season,” head coach Tim Corbin said after the game. “The ones you remember are the ones like tonight when you play a really tenacious team.”

An hour-long rain delay pushed this second round game late into the night, but it did not disappoint. The Rebels elected to start All-SEC lefty Doug Nikhazy in their first-round elimination game against Auburn. Thus, head coach Mike Bianco sent sophomore Derek Diamond (ND, 3-4) to the mound to deal with the Commodores’ high-powered offense.

He squared off with Vanderbilt freshman Christian Little (ND, 3-1) who cruised through 5.1 innings before injuring his throwing arm on a pitch in the sixth inning. Corbin said after the game that it appeared to be a muscle cramp or spasm and he was removed from the game as a precautionary measure.

Both pitchers got off to quick starts in the first inning. Little registered two of his seven strikeouts in the first using violent breaking balls that measured in the low-80s on the radar. Diamond struck out the side for three of his eight strikeouts by dotting the zone with a variety of pitches.

As the rain started to fall once again in the second inning, Little briefly struggled with his command. A walk followed by a passed-ball strikeout loaded the bases, but he escaped the inning with a nasty curveball that struck out Ole Miss’ Cael Baker.

Bigggg strikeout from Little after he loaded the bases with a walk and passed-ball strikeout.

Rain is starting to fall once again in the 2nd inning. Little is up to 4 Ks already. pic.twitter.com/it1NzdmoZ3

His struggles continued into the fourth, but he surrendered just two hits to the Rebels through his first four innings while striking out seven and using just 60 pitches.

Offensively, the Commodores came away with just one hit in the first three innings—a two-out single from Enrique Bradfield Jr. in his second at-bat of the game. But Corbin’s squad was able to break the 0-0 tie in the bottom of the fourth thanks to three consecutive hits from the middle of the order.

After Spencer Jones ripped a double to left field, Troy LaNeve kept his bat scorching hot with a double of his own off the right-field wall. That advanced Jones to third before Tate Kolwyck sent him home and put Vanderbilt up 1-0 with an opposite field single.

Nice piece of hitting gets Vanderbilt on the board first.

Opposite field single for Tate Kolwyck gives Vandy the 1-0 lead. Two on for Parker Noland pic.twitter.com/ai2yY4pFii

The Rebels and Commodores went down in order in the fifth, but that would be both starters’ last complete frame. Little and Diamond each notched one out in their half of the sixth inning before being pulled.

After his 71st pitch of the night, Little came up grimacing from what Corbin labeled a “cramp or spasm.” He was relieved by senior Hugh Fisher after allowing just three hits and striking out seven Rebels in a career-high 5.1 innings-pitched.

“[Little] He was throwing a lot of strikes, he was up in the count,” Corbin noted. “I thought he pitched extremely well and was able to land the secondary pitches.”

Fisher inherited one baserunner from Little and after walking the first batter he faced, surrendered an opposite-field three-run home run to Ole Miss’ Tim Elko. That put the Rebels up 3-1 before Luke Murphy entered the game to finish the inning.

Diamond was relieved by Jackson Kimbrell after he walked Jones with one out in the sixth. The Ole Miss starter allowed just one run on four hits while striking out eight Commodores across 5.1 innings.

Similarly to Fisher, Kimbrell encountered problems of his own upon entering the game. Kolwyck’s second RBI single of the day scored Jones and cut Vanderbilt’s deficit in half. And after Parker Noland hustled out a safety-squeeze bunt, Rodriguez pinch-hit for Romero Jr. The Commodore catcher grounded into a fielder’s choice to score LaNeve, which tied the score at three before Jayson Gonzalez struck out to end the inning.

After finishing the sixth inning, Murphy (W, 2-1) remained in the game to pitch the final three frames. He retired the Rebels with ease in the seventh and ninth, but in the eighth, Elko—the SEC’s Scholar Athlete of the Year—struck again. This time, he ripped a solo home run to deep left-center to put the Rebels on top 4-3. But that score would not hold. In total, he pitched 3.1 innings and struck out six while allowing just one run. He earned the win after Keegan’s walk-off single in the ninth.

Little, Fisher and Murphy held the Rebels to just seven hits all night and struck out 14 batters combined. But for the rocky sixth inning, Vanderbilt’s pitching was strong and consistent.

“Just a good ballgame for us in terms of coming back and being able to withstand their big hits,” Corbin said. “I thought we pitched very well.”

With the win, the Commodores will look to advance to the quarterfinals on Thursday. But standing in their way will be No. 1 seed Arkansas, who trounced the Georgia Bulldogs 11-2 in the second round on Wednesday. The first pitch is tentatively scheduled for 8 pm CDT.