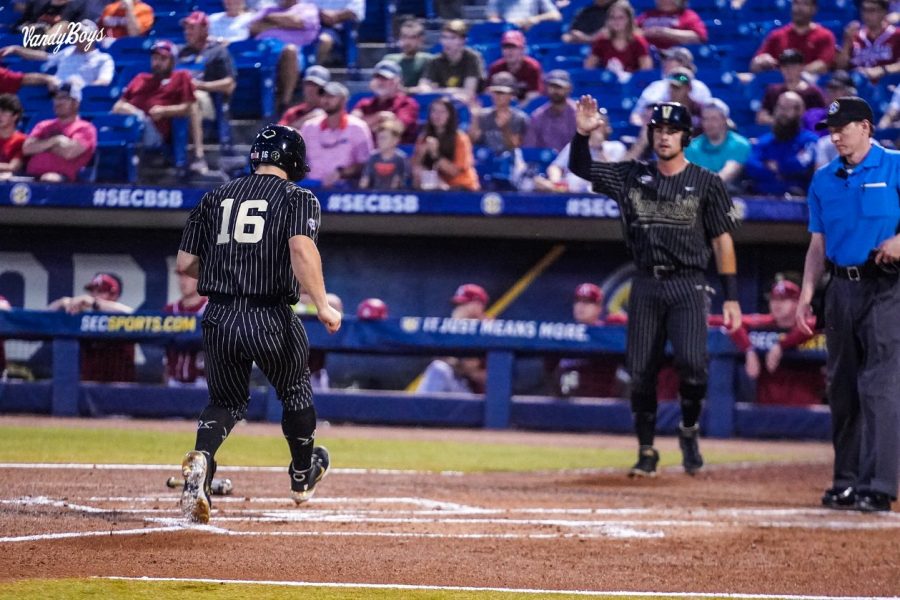 The Commodores will now face Ole Miss once again in an elimination game on Friday. (Twitter/@VandyBoys).

After an epic, walk-off victory over Ole Miss lasted well into the night on Wednesday, the No. 4 seed Vanderbilt Commodores took the field in Hoover once again on Thursday night, this time falling to the No. 1 seed Arkansas Razorbacks, 6-4.

The Razorbacks entered the contest 0-4 all-time against the Commodores in SEC Tournament play, but that changed on Thursday. It was a battle of heavyweights on the mound for two of the league’s premier programs, but the theme of the game was walks. The teams combined for just 12 hits compared to 13 walks on the night.

Head coach Tim Corbin elected to throw freshman Christian Little in the second round of the tournament, leaving ace Kumar Rocker (L, 11-3) available on Thursday night. He squared off against Razorbacks’ ace Patrick Wicklander (ND, 5-1), who entered the contest with a 1.87 ERA. But the Commodores jumped on the lefty early.

Four first-inning hits yielded two early runs for the Commodores. Singles from Enrique Bradfield Jr., Dominic Keegan and Jack Bulger set CJ Rodriguez up with men in scoring position and he delivered. Rodriguez laced a double down the left-field line to give Rocker early run support.

With a 2-0 cushion, Rocker looked dominant in the first inning, using fastballs, sliders, changeups and cutters to strike out the Razorbacks in order. But strangely, he completely lost his command in the second inning, as he surrendered his first of five total runs in the bottom of the second.

Rocker struggled to locate his breaking balls in a 39-pitch second inning and Arkansas took advantage.  A walk and two singles from the Razorbacks cut the Vanderbilt lead in half. Then, Rocker gave up his second walk of the night on a 3-2 count before hitting the Razorbacks’ Matt Goodheardt in the side of the head on an 0-2 pitch. That forced a run home and tied the game at two moving to the third inning.

Arkansas’ Wicklander settled down in the second and third innings using a number of tricky off-speed pitches to force easy putouts. But he allowed two walks and a Tate Kolwyck single in the fourth inning to load the bases. That forced him out of the contest after just 65 pitches. Arkansas’ Ryan Costeiu relieved Wicklander but promptly walked Jayson Gonzalez to score Troy LaNeve and give the Commodores their final lead of the night at 3-2.

Rocker returned to the hill after Vanderbilt reclaimed the lead and was unable to complete the shutdown inning. Goodheardt ripped a double to deep left field that scored two runs, giving the Hogs the lead right back. After four earned runs, four walks, six strikeouts and 86 pitches in just 3.1 innings, Rocker gave way to Chris McElvain. It was Rocker’s shortest outing of the season.

With Goodheardt still on second base, McElvain struck out the first batter he faced, but surrendered Rocker’s fifth earned run of the night on a single by Arkansas’ Cullen Smith.

Isaiah Thomas cut into the Hog lead in the top of the fifth with his 12th home run of the year, but Arkansas took that run right back in the bottom half of the inning with a sacrifice fly to make it 6-4. That would be all the Razorbacks needed to take the game. The final four innings went scoreless and Arkansas punched their ticket to the semifinals.

Despite two solid innings from Nelson Berkwich and a clean frame from Thomas Schultz, the Commodores were unable to rebound from the two-run deficit largely because of Kevin Kopps. Kopps, the SEC Pitcher of the Year, struck out five over three innings and earned the save. He mowed down batter after batter and allowed no hits thanks to his filthy cutter.

Corbin’s team totaled just six hits on the night and left only five runners on base.

With the loss, Vanderbilt will face elimination in the quarterfinals. The Commodores will have a rematch with Ole Miss—who bested Georgia in the third round—on Friday afternoon with a trip to the semifinals on the line.