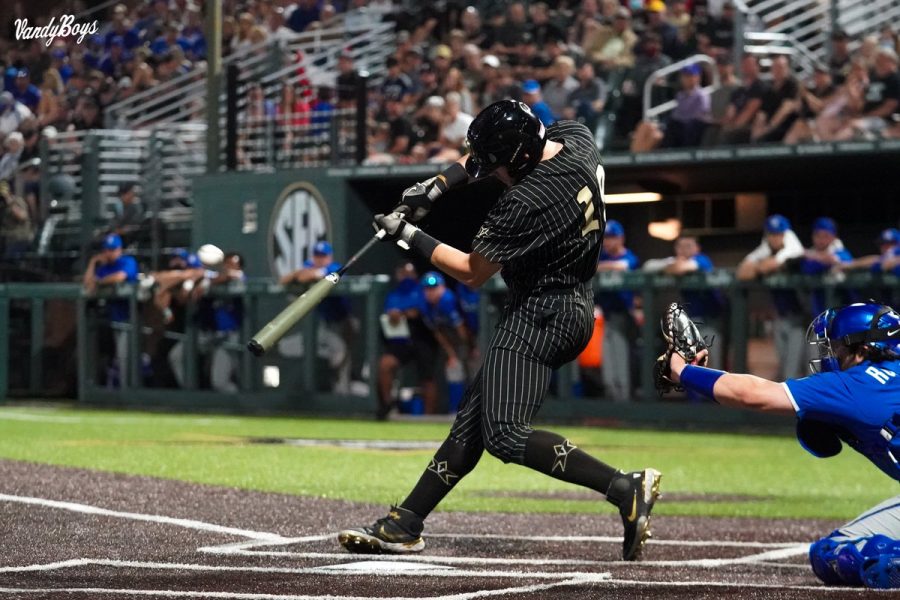 Vanderbilt came through 4-2 against the Kentucky Wildcats (28-21, 11-17 SEC) to start off its final three-game series of the regular season. The win moves Vanderbilt to 38-12 on the season and 18-9 in Southeastern Conference (SEC) play, tying them for first in the East and second in the SEC overall. The game was tight all the way through until sophomore Troy LaNeve hit a two-run home run in the bottom of the ninth to walk off the Wildcats.

“I was just sitting on the fastball,” LaNeve said. “We were getting attacked heavily with fastballs and I was geared up for it.”

Vanderbilt pitcher Kumar Rocker put together a fantastic showing in what will likely be his final regular season start wearing the black and gold. He opened with five shutout innings, heavily relying on his slider and the occasional fastball to strike out eleven batters over the course of the game. Rocker retired twelve straight batters from the end of the second inning to the middle of the sixth.

“I thought he was very, very good. For him to [pitch seven innings], it’s just protecting the team, protecting the bullpen, and shortening the game for the backside,” head coach Tim Corbin said.

Neither the Wildcats nor the Commodores scored until the bottom of the third inning. The seal was broken when Vanderbilt strung together three straight singles, with Jayson Gonzalez scoring on Enrique Bradfield Jr.’s line drive to left field. Vanderbilt quickly jumped out to a 2-0 lead in the bottom of the fourth when Dominic Keegan led off the inning with a solo home run.

Despite his solid performance, Rocker’s weakness of allowing the long ball was exposed by Kentucky’s John Rhodes. Rhodes fouled a ball deep over the left field fence in the fourth inning before straightening his swing out for a pivotal two-run homer to tie the game in the top of the sixth.

On the other side, Kentucky starting pitcher Cole Stupp also put together a respectable outing. He allowed seven hits and two runs in seven innings pitched against a formidable Vanderbilt offense—albeit without the presence of power-hitting Carter Young.

Vanderbilt had an opportunity to break the 2-2 stalemate in the bottom of the seventh inning. Bradfield Jr. came to bat with two outs and two runners on and took Cole Stupp to a full count. During the at-bat, Stupp had a conference with his coach as fans in a fully-packed Hawkins Field rose for the moment to cheer. At full count, Bradfield Jr. grounded out to second base to end the inning and bring the crowd back to their seats.

As the game moved to the eighth, it became a showdown between bullpens as both Rocker and Stupp exited the game. Vanderbilt’s Luke Murphy blazed onto the field in the top of the inning, striking out the side with fastballs reaching as high as 98 miles per hour.

Moving into the bottom of the eighth, Kentucky’s Stupp hit Isaiah Thomas with a pitch and was replaced by Daniel Harper. Harper walked Keegan on four pitches and after a sacrifice bunt by Parker Noland, opted to intentionally walk CJ Rodriguez. The bases were loaded with one out for Spencer Jones, who hit a grounder to second base. On the initial call, Jones was safe at first and Vanderbilt scored a run. However, a replay review confirmed a successful Wildcat double-play that wiped the run off the board and took the game into the ninth, still tied 2-2.

Murphy struggled to carry over his momentum from his performance in the eighth. He hit a batter and allowed a single up the middle to start the ninth inning. After recovering with a fouled-bunt strikeout and a fly-out, Murphy hit a second batter to load the bases with two outs. He came through in the clutch though, forcing a fly-out to left field to close out the Wildcats in the ninth.

With the game on the line in the bottom of the ninth, Harper stayed on the mound for Kentucky. Harper walked Kolwyck on a full count, and was left to face LaNeve. After going down 3-1 in the count, Harper delivered a fastball that LaNeve connected on to win the game. The VandyBoys then proceeded to rush home plate to celebrate LaNeve’s walk-off home run as Hawkins Field erupted.

The Commodores will have two more games against Kentucky. The first of which will be on Friday, May 21 at 6:30 CDT and the second on Saturday, May 22 at 2 CDT.