The Vanderbilt Hustler • May 14, 2021 • https://vanderbilthustler.com/2021/05/14/lacrosse-vanderbilts-historic-season-ends-in-heartbreak/

Vanderbilt’s momentum evaporated, with Jacksonville’s six-goal run at the end of the first half setting the tone. 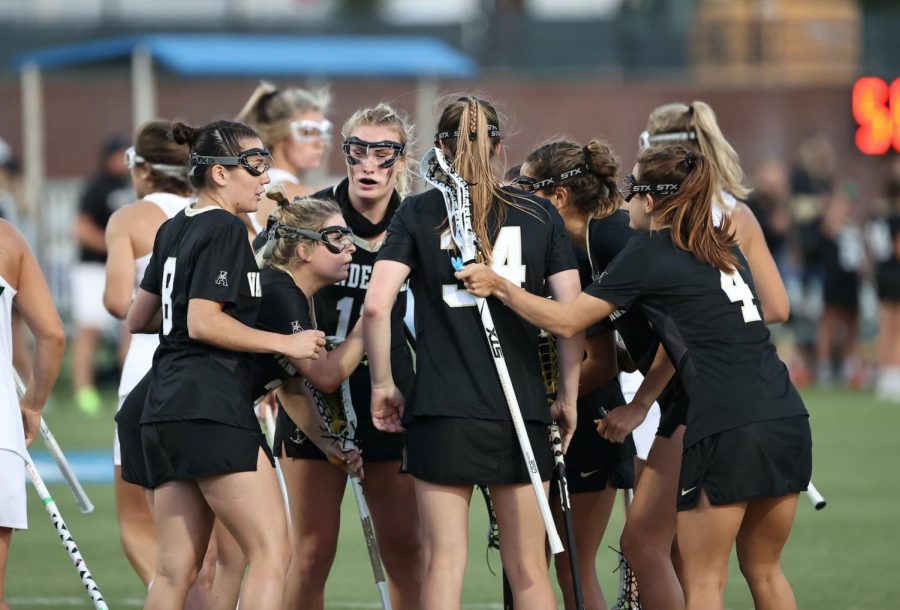 Vanderbilt lacrosse's season came to a close on Friday with a 20-12 loss. (Twitter/@VandyLacrosse).

On May 14, Vanderbilt traveled to Gainesville, Florida to compete in the first round of the NCAA Tournament. The Commodores were sharply silenced in their first NCAA Tournament game since 2010, losing to No. 16 Jacksonville 20-12.

The highly-contested matchup began with Jacksonville senior Jenny Kinsey finding the back of the net to give the Dolphins an early lead with just over two minutes elapsed in the first half. The next five minutes consisted of both teams trading attempts at goal, but neither side could capitalize. Suddenly, Vanderbilt senior Elizabeth Scarrone took control, leading junior Callie Sundin to tie the game at 1-1. A goal from freshman Ella Smith gave Vanderbilt its first lead with nearly 18 minutes remaining in the half. Nearly 30 seconds later though, Jacksonville’s Mackenzie Boyle evened the score. After exchanging goals, Vanderbilt looked to be dominating as goals from Sundin and juniors Maddie Souza and Bri Gross provided the Commodores with a three-score cushion with 11 minutes left in the half.

“We had a couple of turnovers that were self-induced,” Hewitt said. “We did not take care of the ball and we gave Jacksonville too many easy looks at goal.”

Vanderbilt ended the half trailing by three, as they looked to salvage their season. The second half looked to be a continuation of Jacksonville’s domination as Morgan Prescott scored with less than one minute elapsed. However, the Commodores did not back down, as Smith found the net once again with 24 minutes remaining. Vanderbilt continued to trade goals with Jacksonville for most of the half. Down 12-9  with just 15 minutes remaining in the second half, the Commodores needed to climb back.

The Dolphins scored two consecutive goals to give themselves a five-score cushion with 13 minutes remaining. Again though, the Commodores did not give up, and instead rallied back. Two quick goals from Gross and senior Cassidy Orban moved the game to 14-11, and the Commodores had ten minutes to salvage their season. Vanderbilt never saw that comeback come to fruition, as Jacksonville nursed its lead until the end.

The Commodores made a valiant effort to come back but fell short. Jacksonville’s 20-12 win sharply concluded Vanderbilt’s historic season.

The 2021 Commodores achieved historic success through feats ranging from tying for the second most regular-season wins in Vanderbilt history, to seven Commodores earning All-AAC awards and to senior Gabby Fornia becoming the Vanderbilt all-time assist leader.

The Commodores concluded the season in gut-wrenching fashion, but they have much to be proud of.

“We feel super proud of this team,” Coach Hewitt proudly stated. “To make that step this year back into the NCAA Tournament was huge for the program and part of the building process.”