The Vanderbilt Hustler • May 13, 2021 • https://vanderbilthustler.com/2021/05/13/press-conference-notes-corbin-gives-leiter-update-talks-team-injuries/ 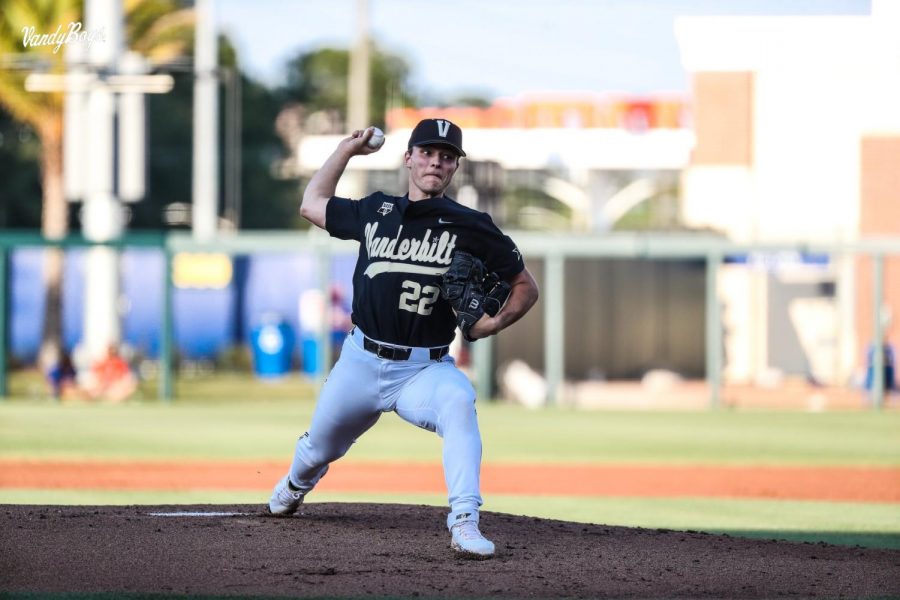 Jack Leiter pitches during an 11-8 loss to the Florida Gators. (Twitter/@VandyBoys).

Following a close 3-2 win over North Alabama on Tuesday, Vanderbilt baseball head coach Tim Corbin spoke to the media about the status of his team and, more specifically, his star pitcher Jack Leiter.

“No update yet,” Corbin said. “He wants to pitch, and I think today and tomorrow will be good indicators of [his status].”

Leiter hasn’t stepped onto the mound since his four-inning outing against No. 14 Florida when he gave up an uncharacteristic seven runs (five earned runs) on five hits with only four strikeouts to show for it. The sophomore pitcher has been resting since then, allowing Patrick Reilly and Chris McElvain to step in and pitch the second game against Alabama. The duo helped propel the Commodores to a 6-2 win and a series sweep, as Vanderbilt won the first two games against the Crimson Tide with the third being cancelled due to heavy rain.

“He’s still a young kid. He’s still just a redshirt freshman when you think of it in terms of the COVID world. Forget about professional baseball and how he’s seen and eligibility—all that stuff. He’s very new to this situation, so he’s learning,” Corbin said.

He also expressed the importance of Leiter taking care of his arm for the sake of both himself and the team.

“You just want to preserve the kid’s arm and put him in a position of success both for him and Vanderbilt moving forward,” Corbin said. “He just needs some time to recover from throwing over the past six, seven, eight weeks.”

Given Corbin’s assessment, it is very possible that the team will elect to rest Leiter against #18 Ole Miss, giving him time to prepare for both the final series of the season against Kentucky and the postseason soon after.

Corbin concluded the press conference by responding to his team’s heightened injury concerns and poking fun at past scholarship controversies.

The NCAA limits the amount of Division One baseball scholarships a school can give out to 11.7. However, Vanderbilt has something called Opportunity Vanderbilt, a financial aid initiative that gives need-based aid to those who qualify. In the past, the team has been accused of using this program to supplement its 11.7 scholarships and essentially ignore the scholarship limit. This is a separate issue, but important backdrop for the tongue-in-cheek comment Corbin made to the media on Wednesday.

“I’m not sure if I’ve seen this many arm injuries throughout baseball just in general, and I think there’s probably a lot of stop and go for those kids,” Corbin said. “But, you know, no one’s feeling sorry for Vanderbilt, I can almost assure you of that because we do have 50 full scholarships, so we can go out and grab anyone we want to and pay for their education.”

Vanderbilt will play the first of its three-game series against No. 18 Ole Miss on Friday at 6 p.m. Kumar Rocker will take the mound and try to bring the Commodores one step closer to a first-round bye in the Southeastern Conference tournament, which is now just two weeks away.