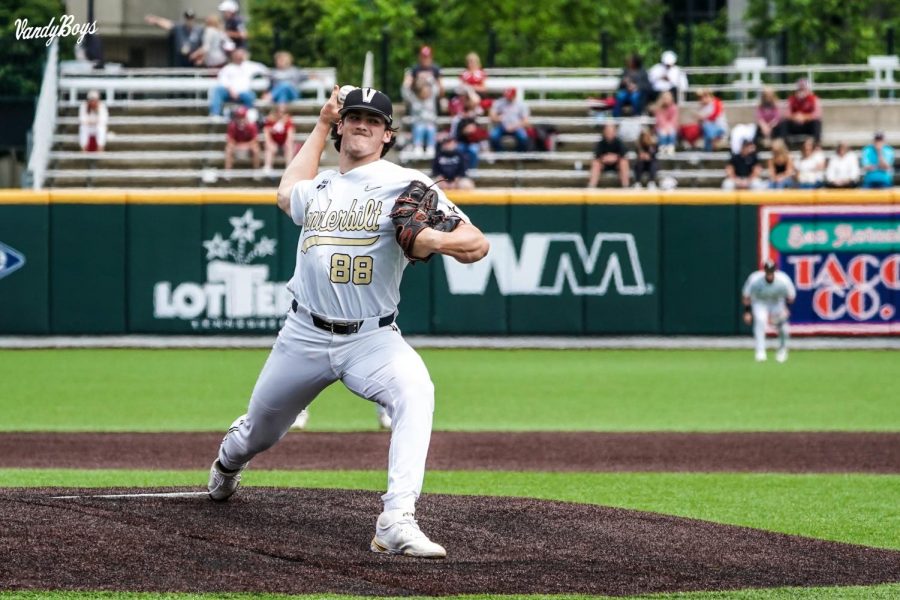 After taking game one of an important late-season series with Alabama, the second-ranked Vanderbilt Commodores rolled the Crimson Tide 6-2. The story of the afternoon was an impressive pitching performance from Commodore freshman Patrick Reilly (W, 4-1) that saw him go a career-high seven innings and surrender just two runs on two hits. He also totaled a career-high nine strikeouts.

Reilly took the hill for game two of the series in place of usual Saturday starter Jack Leiter. Leiter, who threw 93 pitches in just four innings last Saturday against Florida, got the day off due to “fatigue,” according to head coach Tim Corbin. The Vanderbilt skipper also added that there are no long-term concerns for Leiter at this time.

“He’s going to be ok. We will just take everything one day at a time,” Corbin said of his star sophomore. “I know what the circumstances are. We have a long way to go. Every game is important, every series is important. But at the same time, you have to preserve the health of the kids.”

Nonetheless, the freshman began his day much like Leiter has on so many Saturdays this season. He balanced breaking balls with a number of high fastballs that the Crimson Tide simply could not catch up to. He registered five of his career-high nine strikeouts over the first two innings alone, whiffing five straight Crimson Tide batters to start the day.

“I thought [Reilly’s fastball] had a lot of life at the plate,” Corbin said after the game. “I thought his attack was real good, it was forceful and he was getting down the hill.”

Reilly was opposed by Alabama’s Dylan Smith (L, 1-6) who was roughed up early by an eager Commodore lineup.

Enrique Bradfield Jr. led-off the game with his fifth hit of the series, a line-drive single up the middle. He then proceeded to steal second and advance to third on a mishandled throw-down from Alabama’s catcher, Sam Praytor.

After Carter Young drew a walk, Parker Noland delivered the game’s first run on an RBI groundout. CJ Rodriguez then capped the inning with a shallow fly ball to right field that fell in for a double. That scored Young and gave Reilly an early 2-0 cushion heading into the second inning.

B1: After a Dominic Keegan foul-out, Parker Noland drives home Bradfield Jr. with an RBI groundout for the game's first run.

CJ Rodriguez then steps to the plate and lofts a shallow fly ball that falls in no-man's-land. Young scores and Rodriguez advances to 2nd.

Troy LaNeve added one more run in the second inning, ripping his second home run of the year to deep center field to boost the Commodore lead to three.

B2: Troy LaNeve keeps the scoring going with a no-doubter that may have reached Rand Hall. 2nd stomp of the year for LaNeve.

Cooper Davis then bunts his way to first. Carter Young now up after the Crimson Tide finally retire Bradfield Jr. on a pop-out bunt attempt.

Using early run support, Reilly remained steady through the third and fourth innings. Although he allowed his first base-runner on a third-inning walk, he cruised through four innings by piling up strikeouts and easy fly-outs.

Finally, after surrendering a two-out walk on a very close full-count pitch to Alabama’s Davis Heller, he allowed his first hit of the day to Crimson Tide shortstop Jim Jarvis. Jarvis ripped a line drive to right field and despite a diving attempt, LaNeve could not come up with the catch. Heller scored from first base and cut the Vanderbilt lead to just two—for the time being.

After a Cooper Davis walk and Bradfield Jr. sacrifice bunt to begin the bottom half of the fifth inning, Young launched his 13th home run of the year way over the seats in right field. The Commodores second home run of the game put them on top 5-1 heading into the sixth inning.

B5: Dinger alert…13th of the year for Carter Young gets that run right back. This one was MASHED to right field and Young knew it immediately.

With a four-run lead, Reilly smoothly retired Alabama in order in the sixth inning, racking up his fourth 1-2-3 inning of the afternoon.

But Alabama’s Owen Diodati got the best of him in the seventh inning before he concluded his outing, launching a solo home run that cut into the Vanderbilt lead. Reilly then retired the final two batters of the inning and ended his day after 108 pitches spread over seven innings.

“Today I just came out with a different mentality. Trusting in myself and trusting what I can do,” Reilly said after the game. “I was throwing hard today. I hit a lot of my spots and throwing in some cutters and changeups kind of kept [the Crimson Tide] off-balance.”

The freshman gave way to sophomore Chris McElvain in the top of the eighth inning, but not before the Commodore lineup added some insurance. A two-out RBI double from Parker Noland put Vanderbilt back on top by four before McElvain pitched two scoreless innings to close out the win.

With the win, Vanderbilt will remain at the top of the SEC East standings regardless of whether Tennessee beats Missouri on Saturday afternoon.

The VandyBoys will look to sweep the Crimson Tide on Sunday in the final game of the three game set on Sunday at 1 PM central.