Following the departure of six members of the 2020-21 team, Jerry Stackhouse retooled his roster this offseason primarily using the transfer portal. 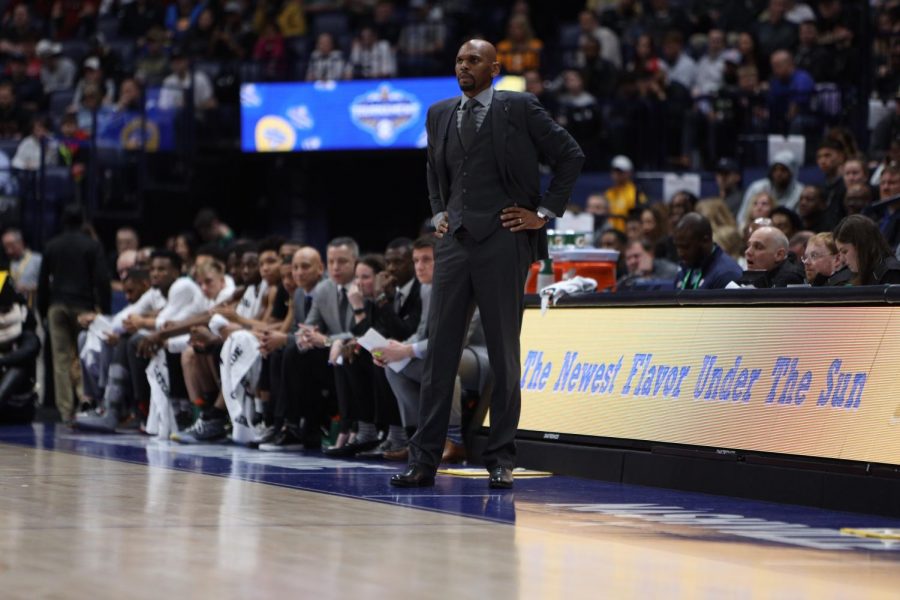 Following the conclusion of his second season on West End, Jerry Stackhouse absorbed a series of gut-punches to his roster. Seniors Clevon Brown, Maxwell Evans and Ejike Obinna announced their intentions to transfer early in the offseason and junior DJ Harvey and freshman Issac McBride quickly joined. Then, Stackhouse sustained his most significant blow as star forward Dylan Disu entered the portal on April 21 and quickly committed to Texas on April 26.

These transfers opened up six scholarships. Two of those were already slated to be filled by incoming freshmen Peyton Daniels and Gabe Dorsey. But the remaining four needed to be replenished via late freshmen signings or transfer portal additions.

Luckily for Stackhouse, more than 1300 players have declared intentions to transfer over the course of the past year. By mining the loaded portal and staying patient in the late signing period, the Commodores were able to retool their roster.
2021-22 Roster Outlook
Current scholarships filled: 13

For the time being, Stackhouse has rounded out his 2021-22 roster. With the addition of Shane Dezonie, a new member of the 2021 signing class, and three transfers—Rodney Chatman, Liam Robbins and Terren Frank—there is no room for additional newcomers.

Considering these deadlines, if Pippen Jr. elects to forgo his collegiate eligibility—or transfer—Stackhouse would surely fill his final roster spot via the transfer portal.
Offseason Additions
Vanderbilt racked up a total of six commitments in April and May. The group includes three transfers, one incoming freshman and two class of 2022 commitments who will join the Commodores in the fall of 2022.
Liam Robbins – 7’0” C from Minnesota
Robbins comes to Vanderbilt after two years at Drake and one year at Minnesota, where he played under coach Richard Pitino. After Pitino was fired, Robbins followed his uncle—new Commodore assistant coach Ed Conroy—to Vanderbilt.

Robbins appears to be the crown jewel of this transfer class. Unfortunately, because he already transferred once, per NCAA regulations he is not eligible for the COVID-19 blanket waiver and instead must apply for and receive a traditional waiver to be eligible this fall. However, because of the coaching change he endured at Minnesota, it appears likely that he will in fact get that waiver.

Assuming he does apply for and receive a waiver, he will likely start every game this upcoming season. His large frame and elite shot-blocking are elements Vanderbilt fans have not witnessed since the graduation of Commodore great Luke Kornet. Robbins averaged double-digit points both of the last two years and recorded 62 blocks (2.7 blocks per game) last season for Minnesota in just 23 games. For context, Vanderbilt registered 65 blocks as a team in the 2020-21 season.

Averaged 12 PPG, 7 RPG and 2.7 BLK in 23 starts this past year for the Gophers. He will have two years of eligibility remaining and figures to start from day one.

Robbins’ game continued to grow during his time at Minnesota. He expanded his range to feature a smooth three-point shot that he used nearly three times per game at a 33% clip last season. He also crashes the glass extremely well, especially on the offensive end, where he has averaged two or more offensive rebounds each of the past two seasons.

His stature inside will be intimidating for opposing bigs on defense and with a blend of post scoring and putbacks, he will demand attention from opposing help defenders. This presence inside will open up the floor for Vanderbilt’s guards to hunt three-point shots in Stackhouse’s offense.
Rodney Chatman – 6’1” SG from Dayton
Chatman is another upperclassmen transfer who committed to join the Commodores for his final year of eligibility on April 17. After two seasons at Chattanooga, Chatman played two years for coach Anthony Grant at Dayton, where he started 42 of the 43 games he appeared in, including all 31 during Dayton’s impressive 2019-20 season. Chatman played just 12 games this past season due to a hand injury he suffered in Dec. 2020. After getting surgery and missing nearly two months, he returned to play six of Dayton’s final seven games.

Chatman is an impressive defender who will likely start alongside Pippen Jr. if he returns to Vanderbilt. With quick feet and active hands, he showed an ability to lock down numerous high profile players in his two years at Dayton. His most productive season was undoubtedly his junior year, during which he boasted an impressive 95 individual defensive rating and helped Dayton to a 29-2 record. His defensive prowess was on full display in an early-season game against Georgia at the Maui Invitational in which he held future first overall NBA Draft pick Anthony Edwards to just 2-10 shooting from the field.

Chatman is a really good defender and passer and would compliment Pippen Jr. very well if he returns ⬇️⬇️⬇️ pic.twitter.com/utAnV2SQcU

Offensively, Chatman works well in a supporting role. His shooting splits have been erratic over his four-year career, but he did shoot 34% from the three-point line as a sophomore and 36% as a junior.

Nonetheless, he will be a constant threat to attack the paint and kick out to shooters while likely matching up with the opposing team’s best guard on the defensive end of the floor.
Terren Frank – 6’8” PF from TCU
Stackhouse’s third dip into the transfer portal came via a player he already had a very solid relationship with. Vanderbilt pursued Frank heavily as a senior in high school during the 2020 recruiting cycle but was unable to beat out TCU for the California prospect. After announcing his intentions to transfer, he committed to Vanderbilt on April 19.

Frank, a former three-star recruit, played alongside Pippen Jr. and former Vanderbilt commit Kenyon Martin Jr. in high school at Sierra Canyon. The 6’8” forward brings much of what the Commodores lacked this past season: size and athleticism on the wing.

Frank battled COVID-19 throughout his freshman season at TCU and although he played just 14 games, he showed that he can be a reliable spot up three-point shooter and a constant force on the defensive glass. He is physical inside and has a high and smooth jump shot with solid balance. While he is not a threat to pull up off the dribble, he flashed signs of being a productive spot-up shooter at TCU in offensive sets very similar to what Stackhouse runs at Vanderbilt.

In a limited sample size, he shot 39% from deep, highlighted by a two-game stretch in the middle of the season when he played 47 minutes and scored 16 points on 4-7 shooting from beyond the arc.

Frank is still incredibly raw but offers Stackhouse a long-term option at either forward position. He will have four years of eligibility remaining, giving him time to develop and the chance to play with a number of high-profile recruits that Stackhouse is set to bring in next season.

He does, however, figure to be a part of the rotation in his first year on West End. He will likely compete with Myles Stute and Jordan Wright for minutes at both small and power forward and depending on Pippen Jr.’s status, may get to show off a bit of chemistry with his former teammate.
Shane Dezonie – 6’4” SG from Brewster Academy (NH)
Instead of looking for a forward to replace Disu, Stackhouse used his final scholarship on one of the nation’s top remaining high school guard prospects. Former Arizona commit Shane Dezonie committed to Vanderbilt on Wednesday night as a member of the class of 2021. The 6’4” shooting guard attended Huntington Prep (WV) alongside former Duke forward Jaemyn Brakefield before finishing his high school career at Brewster Academy in New Hampshire.

Dezonie decommitted from Arizona on April 27 following the firing of Sean Miller and quickly picked up a Vanderbilt offer on May 1, according to his Twitter page. He then committed to Stackhouse and the Commodores just four days later via Twitter.

The four-star prospect will surely be an immediate contributor this upcoming season. Known for doing a bit of everything, Dezonie boasts solid athleticism and a nice feel for the game. He is an overall solid playmaker who can both finish at the rim and find teammates off the bounce.

As a freshman, he will likely compete for minutes in a somewhat crowded backcourt. Rising sophomore Tyrin Lawrence is still recovering from a torn ACL injury but he and Dezonie figure to be the lead candidates for big-time minutes at shooting guard.

He joined Dorsey and Daniels in the 2021 class, helping boost it to 33rd nationally and 7th in the Southeastern Conference (SEC) per 247Sports’ team rankings.
Future Commodores
In perhaps the biggest recruiting news of the offseason to date, Stackhouse landed commitments from the highly-coveted duo of Noah Shelby and Lee Dort. The Greenhill School (TX) teammates committed to Stackhouse’s 2022 class together on April 7.

Shelby, a four-star guard, is regarded as one of the top shooters in the class of 2022 and will fit seamlessly into Stackhouse’s modernized system. And Dort, a five-star forward, will provide athleticism and power that the Commodores have lacked inside for years.

With their commitments, and the commitment of in-state talent Presley Patterson, Vanderbilt currently ranks third in the nation in 247Sports’ 2022 class rankings.

Stackhouse has worked to round out his roster in a way that gives his team flexibility. If Pippen Jr. does elect to come back, this team—on paper—may have the defense and backcourt scoring necessary to compete for NCAA bubble consideration.

If Pippen Jr. does not elect to return, Stackhouse has compiled a group of mostly young players with plenty of eligibility remaining. With Robbins, Frank, Dezonie, Dorsey, Daniels, Shelby and Dort all potentially in the mix in 2022-23, Stackhouse has given his roster extremely interesting long-term potential.