A strong effort on Saturday was not enough to propel the Vanderbilt Commodores into the next round of the NCAA Tournament. 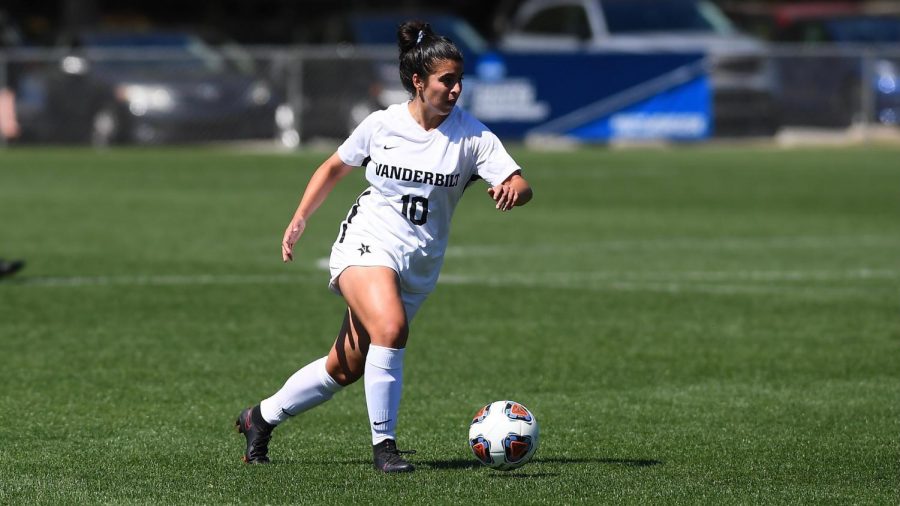 Vanderbilt soccer's historic season came to a close on Saturday after a 2-0 loss to Penn State in the NCAA Tournament. (Twitter/@VandySoccer).

After an impressive fall season that culminated in a Southeastern Conference tournament championship win, the Vanderbilt Commodores came back in the spring to play in their fourth consecutive NCAA Tournament. Unfortunately, they were defeated by the Penn State Nittany Lions 2-0.

It was a gorgeous day for playoff soccer at WakeMed Soccer Park in Cary, North Carolina as the Vanderbilt women’s soccer team looked to gain the program’s  first ever Sweet 16 berth. Their opponent, Big Ten regular season champions Penn State came into the game with a strong 11-2-1 record and a knack for scoring lots of goals. This strength was on full display in the first round of the NCAA Tournament when Penn State convincingly defeated Alabama State 5-0.

There was only one surprise in the lineups—senior goalkeeper/kicker Sarah Fuller was on the bench in favor of freshman Kate Devine who was not with the team during the fall. Fuller is healthy, rather the decision was performance-based.

“We just felt that Kate and her performance against Duke on a big stage was awesome and then continued to do that in practice for the next three weeks,” head coach Darren Ambrose said after the game.

Fuller had been starting for the Commodores’ since the fall but was replaced in the second half of the Duke game in favor of Devine who, as Ambrose said, made some critical saves that kept the team’s clean sheet and preserved a tie.

“Not an easy decision by any means. Sarah has been a great servant to the program and has run her race and has contributed obviously significantly this past seven, eight months, but it’s day to day,” Ambrose said. “It’s not ‘what did you do six weeks ago?’ It’s ‘what did you do in the last three weeks?’”

The game itself started slowly. Vanderbilt had more control of the ball in the first half and had a few good chances to show for it, notably a Raegan Kelley shot from the top of the 18-yard box. The attempt nearly floated over the hands of Penn State goalkeeper Katherine Asman, but instead, hit the crossbar and gave the keeper a chance to recollect herself and the ball. This was one of the Commodores main chances that they needed to convert on if they were to win and live to fight another day.

“I thought we carried the game,” said Ambrose. “We lacked a little bit of quality in the 18-yard box and certainly that kind of bit us a little bit in the fall at times, but I think a lot of that comes down to, quite frankly, just not having an edge in key moments.”

At the end of the first half, the score was 0-0, but Penn State started getting more and more chances. Their breakthrough came in the 63rd minute of play on a fast-break where the ball came out wide to winger Rachel Wasserman who crossed it into sixth-year player and graduate student Kristin Schnurr. Schnurr promptly unleashed a powerful strike that hit the crossbar and rattled in, never really giving Devine a chance to stop it.

Vanderbilt had a few more chances turned away by keeper Asman before the second Penn State score sealed the game. The goal came from a corner that was placed beautifully into the 6-yard box. It created pandemonium for the Commodore defense, and while Devine saved the first Nittany Lion shot, she was unable to stop the rebound chance from freshman Eva Alonso. Midfielder Sam Coffey, who was dangerous all game long, was credited with the assist.

“We’re usually a little bit better at defending corners,” Ambrose said. “I just think we looked a little bit rusty in and around the last 20 yards of the field—we just didn’t look our normal sharp selves.”

Overall, Penn State outshot Vanderbilt 11-10 with six shots on target to Vanderbilt’s three. However, both teams had chances on net, it just came down to a matter of who capitalized on those chances more often.

The game ended 2-0, and Penn State will be moving on to face Florida State in the Sweet 16. As for Vanderbilt, Ambrose felt the outcome might have been different had the tournament been in the fall.

“I think you’re really talking about two different seasons, and that’s unfortunate with the challenges this year and the pandemic and we all know it,” Ambrose said. “The teams that played in the fall now turn around and play and try to re-find a rhythm, whereas you’ve got teams that were in the spring and only played in the spring that are now hitting a rhythm.”

Ambrose continued on to talk about how hard his team has pushed through this season and his amazement in watching them compete.

“I’m not hanging my head by any means. I’m just proud of how they’ve conducted themselves and how they’ve competed under ridiculously difficult circumstances at times,” Ambrose said.

The head coach closed with a positive message about the year and the team, wrapping up a memorable Commodore season that will surely propel the program to new heights and hopefully an NCAA championship in the coming years.

“I have no regrets about the year,” Ambrose said. “As difficult as it was, I think it showed all of us as human beings, and myself included and my staff and all the players, that we can actually handle a lot more adversity than we realize. We’re stronger than we think we are, emotionally and mentally, even though it’s been really, really difficult.”