Kumar Rocker and Tim Corbin explored the link between Rocker and Jack Leiter and looked ahead to the team’s next matchup. 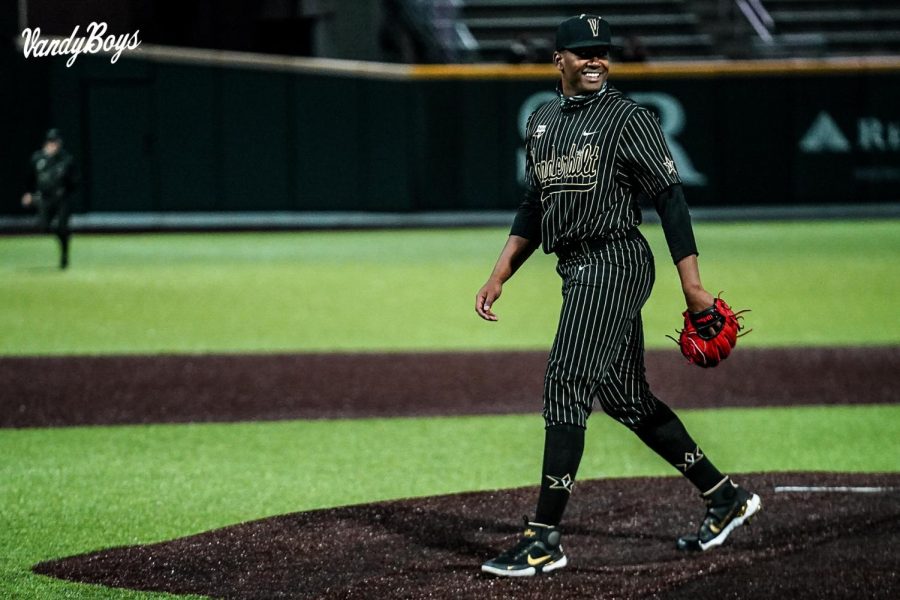 Another weekend series, another crucial 2-1 victory for the VandyBoys. After its dramatic win over rivals Mississippi State, Vanderbilt will head to Gainesville to take on the 28-12 Florida Gators. However, before the team heads south, head coach Tim Corbin and star pitcher Kumar Rocker answered some questions about the upcoming series and the relationship between Rocker and fellow pitcher Jack Leiter.

Corbin said he has been most impressed by the way in which the two young aces have joined forces to improve each other, rather than tear each other down through competition.

“Sometimes [having multiple star pitchers] becomes combustible because they’re both going after the same things,” Corbin said, whereas his stars, Leiter and Rocker, are “unifying forces of information and using them to help one another.”

Corbin said Rocker and Leiter talk continuously, bouncing ideas off one another to gain a fresh, new perspective. Fortunately, when Rocker took the spotlight, he answered everyone’s burning question: what kind of ideas are the young stars “bouncing off each other?”

“After certain outings, like immediately after, it would just be pitch selection throughout the game, and other than that, it’s really, when are we gonna play golf during the week?” Rocker said. “Everything’s fine, keep things light.”

When asked who was the better golfer, Rocker didn’t hesitate.

In general, the junior pitcher feels that the relationship between him and Leiter has only behooved both of their games. In fact, it’s possible that their differences have been the key factor in their successful relationship. Corbin noted that despite the vast differences in the two’s backgrounds, they’ve blended together flawlessly.

Moving forward with a combined 16-2 record, Leiter and Rocker will face strong competition in the Gators, who have won eight of their last nine. Indeed, though Florida is 5-7 away from home, the Gators are 23-5 in Gainesville with only one of those five losses coming from a Southeastern Conference opponent. However, Corbin maintains that his team’s preparation remains the same.

“The approach is [and] will always be the same. It has to be the same. I think we’re very intentional with what we do,” Corbin said. “We have a process of how we travel—when we land, what we do. It’s not militaristic, but I would say it’s very formal, and we keep it that way. And I think it’s almost like a large camping trip. I think road trips are the best team building blocks you could possibly put in place.”

Rocker also enjoys these “camping trips,” but for a different reason. The pitcher said he prefers to play away rather than home right now because of the team’s role as spoiler.

“I like showing up with my team and it’s us against everybody. That’s a lot more fun than having the comfort at home.” Rocker said.

Rocker also addressed his perceived dip in velocity and how he plans on staying fresh for Friday, despite playing a complete game just a week ago.

“I think it’s just kinda a midseason thing. I don’t think it dropped as drastically as everyone was saying, but yeah I think it happens during the season,” said Rocker. “[What’s important is] keeping your foot on peoples’ necks and just keep going through the season.”

Rocker reaffirmed his confidence in himself and played down any fears or doubts about his pitching velocity, but either way, last Friday’s game is evidence that the junior can still sling it effectively without reaching top speeds.

With Tennessee just a few games back and the Gators creeping behind them in the SEC East standings, it’ll be crucial for Vanderbilt to pick up wins from both their aces this weekend. Luckily, the Commodores have been stellar on the road this season with a 10-2 record that they’ll look to improve this Friday at 7 p.m. ET.