Vanderbilt ties for fifth in stroke play, but is defeated by No. 3 Auburn on Saturday. 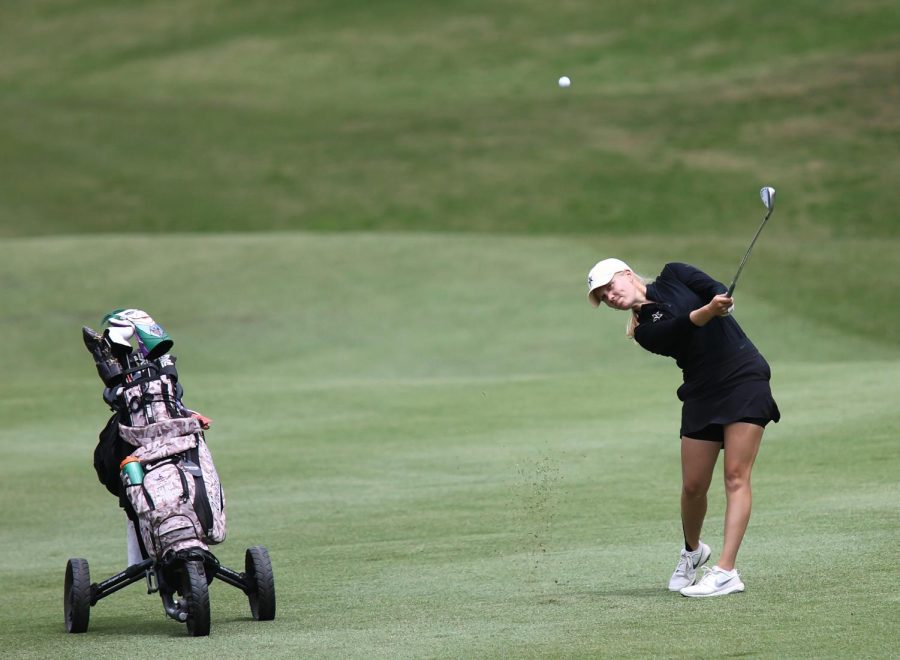 Vanderbilt’s stellar eight-under par performance on Friday, April 16 punched the Commodores a ticket into the SEC Championship match play round. Out of the 14 teams competing in stroke play on April 14-16, the top eight teams from 54 holes moved on to match play and the Commodores were one of them. Their momentum from Friday was shut down in match play, however, as Auburn defeated the Commodores with an emphatic 3-1-1 showing on Saturday.

“We drove down here Monday, and the goal was just to get us a tee time for Saturday,” head coach Greg Allen said. “I am really proud of the girls for their effort, and really the fight for overcoming adversity during stroke-play.”
Stroke Play
The Commodores started strong on Wednesday, as the student-athletes combined to post a seven-under-par performance. Sophomore Celina Sattelkau posted a career-low five-under par 67. Tess Davenport’s 70 and Auston Kim’s 71 were also key to Vanderbilt’s strong start.

On Thursday, the Commodores’ were tied for seventh with just 18 holes remaining. Sattelkau and Davenport stayed dominant, as two three-under par 69’s carried Vanderbilt into safety.

“It’s been fun watching Celina and Tess,” Allen said. “They’re experiencing this for the first time and this is a great opportunity for them.”

The Commodores capitalized on the final day of stroke play, as their eight-under performance positioned Vanderbilt with a tie for sixth place. Vanderbilt ended stroke play at 15-under-par as they prepared to face the Auburn Tigers, who had a score of 839 (-25).

Sattelkau stayed hot as she posted another 67. Louise Yu’s 69 and Davenport’s 72 were crucial to Vanderbilt’s survival.
Match Play
“We’re excited about tomorrow as [the match] is going to be a really good battle with Auburn,” Greg Allen said prior to Saturday’s match. “We want to do the things we have done all year. We have our momentum today and hopefully that can carry to tomorrow.”

A strong rally from the Commodores in stroke play seemed a memory of the past, however, as Auburn topped Vanderbilt on Saturday.

Coach Allen was particularly impressed by junior Auston Kim’s resilience on Friday, as she followed two consecutive double-bogeys with back-to-back birdies. Unfortunately, Kim did not finish Saturday in the same ideal manner as Friday, falling short to Auburn’s Megan Schofil, 5 & 4, meaning that Kim faced a five-hole deficit when there were four holes left to play.

Senior Commodore Morgan Baxendale was silenced by Mychael O’ Berry, who won with a 7 hole lead, with 6 holes remaining. The Commodores’ hopes to be SEC Champions would not come to fruition.

A 3-1 Auburn victory led to the highly-contested match between Europeans Celina Sattelkau and Elaena Hualde ending in a tie on the 17th hole.

Vanderbilt now waits for the selection process for the NCAA regional championships on May 10-12, which will take place in various locations across the United States.