A four-run fifth inning powered the VandyBoys to the midweek victory. 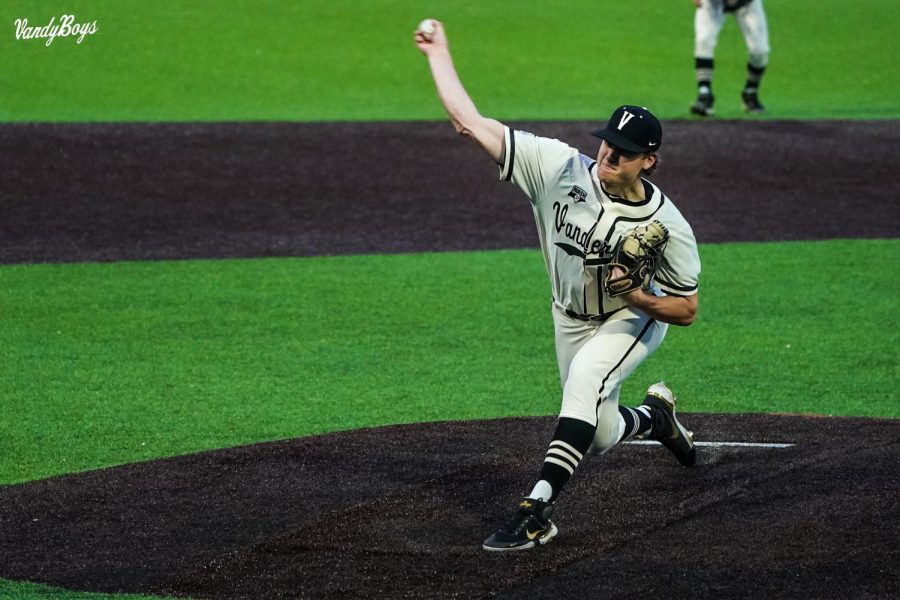 Vanderbilt returned to form in a 6-4 win over Eastern Kentucky on Tuesday night.

After only scoring eight runs in three games against Georgia last weekend, the Commodores needed an offensive burst to get back on track.

The need for offense was heightened when Eastern Kentucky scored a run in the top of the first inning to put the pressure on the Commodores’ bats.

Vanderbilt’s answer came in the bottom of the second inning when right fielder Isaiah Thomas, who was in the lineup for the first time since suffering an injury against LSU on April 1, tripled to right-center field. He scored designated hitter CJ Rodriguez from second base to tie the game at one apiece.

The Commodores added another run in the third inning. Shortstop Carter Young doubled down the right field line, and first baseman Dom Keegan singled through the left side of the field to bring Young home. Vanderbilt was able to load the bases with two outs for Thomas, but he grounded out to second base to end the inning.

The Colonels were not going to let up without a fight. Designated hitter Caleb Upshaw hit a solo home run just above the head of Thomas in right field to knot the score at two-all.

Vanderbilt threatened in the bottom of the fourth inning, but Jayson Gonzalez was called out at third base in a double steal to end the inning.

Right-handed pitcher Thomas Schultz got into a groove in the top of the fifth inning, striking out the side. He would finish his night with six innings pitched, allowing four hits and two earned runs while striking out seven batters. Schultz’s solid outing came in his first midweek start after he previously started on Sundays for the Commodores.

Vanderbilt’s offense did most of its damage in the fifth inning.

Keegan got the bats going by sneaking the ball along the third base line to the outfield for a leadoff single. Left fielder Jack Bulger grounded into a fielder’s choice, and he took advantage of the throwing error to first base to advance to second. Rodriguez followed up with an infield single.

With runners on first and third, second baseman Parker Noland stepped up to the plate. He crushed an opposite-field homer above the wall in left field to put the Commodores up 5-2.

Not to be outdone, third baseman Jayson Gonzalez hit a double off the left field wall to score catcher Maxwell Romero Jr., who had reached base on a bunt single.

With a 6-2 lead, Schultz pitched his final frame of the night in the top of the sixth inning.

“For a guy to get his team into the seventh inning on a Tuesday night is essential right now,” Corbin said. “Where we are from a depth standpoint, we needed that.”

Freshman Christian Little handled the seventh inning for Vanderbilt. He walked one and hit a batter, but Little was able to regain his control to strike out two Colonels.

Next to take the mound for the VandyBoys in the eighth inning was freshman Hunter Owen. Owen allowed a leadoff single to center field. He got the next two outs, but first baseman Charlie Ludwick hit an RBI single to right field to tighten the Vanderbilt lead to three runs.

Vanderbilt’s offense could not muster any more runs, and freshman right-hander Donye Evans came in to pitch the ninth inning. A throwing error by Gonzalez on a throw to first base put runners at second and third base with just one out. The three-run lead looked to be in danger with the tying run at the plate.

Corbin brought in junior Luke Murphy to close out the frame. Murphy, one of the most experienced pitchers in a young bullpen, was able to close out the victory. The first batter he faced hit a grounder to third base, and Romero Jr. handled Gonzalez’s throw to apply the tag at home. Second baseman Daniel Harris IV hit an RBI single to cut the lead to two.

A wild pitch put runners on second and third base for Upshaw. Murphy got him to hit a high pop up to center field to end the game.

Vanderbilt returns to the field at Tennessee on Friday night. The game will be televised by ESPNU at 6 p.m. CT.