The scrimmage featured strong defensive play, as players got the opportunity to once again show how their skills are developing to first-year head coach Clark Lea. 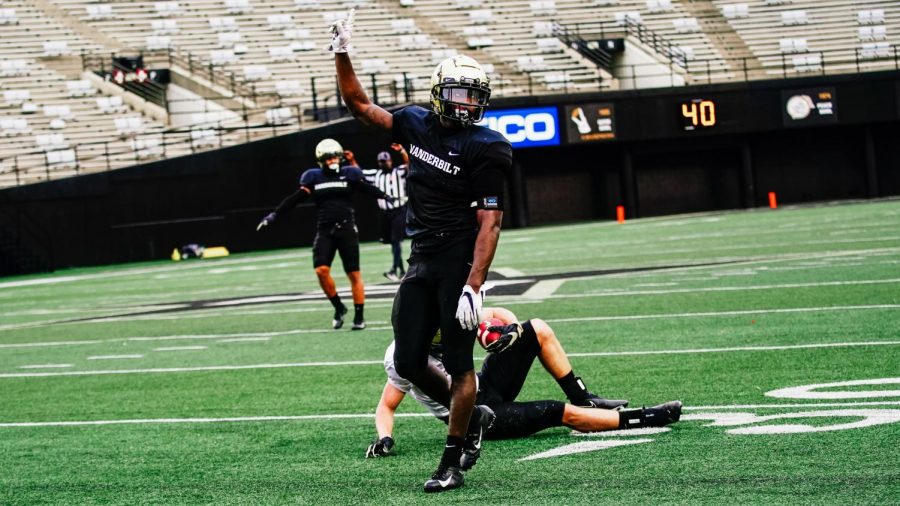 Vanderbilt football competes in its second scrimmage of the spring. (Twitter/@VandyFootball)

Vanderbilt football had its tenth practice of the spring Friday evening in a full-contact scrimmage under the lights. In the second scrimmage of the spring season, players got the opportunity to show how their skills are developing to first-year head coach Clark Lea.

Given the wear and tear of ten practices, though, the Commodores are starting to deal with some injuries.

“We’re a little banged-up right now, so I think the first thing I’m looking for is to get out healthy with a team that can finish up next week,” Lea said.

The players were given white and black practice jerseys to differentiate each team, and each quarterback was dressed in red no-contact jerseys. Insistent on having each player earn the right to his number, Lea once again had players wear jerseys with only their names on the back, and plain gold helmets without the typical Vanderbilt “Star V” logo.

Prior to the first snap, Coach Lea walked into the stands, shaking hands with fans and thanking everyone in the crowd for their support.

“I just appreciate people showing up for us and the enthusiasm behind it. I want them to know their head coach,” Lea said. “The fans that made it out, that was meaningful to me.”

The team played for about 75 minutes Friday as it continues to work toward the annual spring game on April 17.

Sophomore quarterback Ken Seals started behind center for the Commodores, just as he did in 2020. After the first few series, he switched off taking snaps with junior Mike Wright. Senior Jeremy Moussa, a transfer from San Bernardino Valley College, and senior walk-on Jack Bowen also saw limited action at quarterback.

The offense had little-to-no offensive production to start. There were two fumbles on the first four drives, and the other two resulted in punts. Senior cornerback Justin Harris anchored the defense early on with his hard hits and his ability to disrupt the passing lane for the quarterback.

Because the offense is still coming together and players are learning new schemes, Coach Lea said it’s no surprise that the defense had a stronger start to the scrimmage.

“Defense is usually going to take hold a little bit sooner because there’s innately a little less execution and a little more spirit, heartbeat, enthusiasm and flying to the ball,” Lea said. “I’m really impressed with how that unit is coming together.”

The offense did start to get things going, though. Junior running back Re’Mahn Davis, a transfer from Temple University, scored the first touchdown of the night on a short, third-down run from inside the five-yard line.

Throughout the night, both Davis and sophomore running back Rocko Griffin showed their speed and power, as they each broke free for a handful of long runs that had been carved out by the offensive line. Both Seals and Wright showed that they also have the ability to scramble and run at quarterback if no passing options are available.

Senior Pierson Cooke was the next player to put points on the board, as he kicked a 37-yard field goal later in the evening.

On the final series of the game, Coach Lea put 45 seconds on the scoreboard in order to simulate an end-of-the-game experience.

With Seals under center, fifth-year senior Chris Pierce Jr. made several sideline grabs, just barely keeping his feet in play, and senior tight end Gavin Schoenwald used his physical play to consistently get open and move the offense down the field. On a play which would turn out to be the last of the night, Ken Seals threw a touchdown pass to senior Cam Johnson from just inside the 40-yard line.

“Offensively, I thought we had flashes of applying pressure through tempo and of getting the ball in scoring positions,” Lea said. “We have to finish drives. We have to develop a level of conditioning that allows us to maintain pressure.”

The Commodores have the rest of the weekend off before returning to practice next week on Monday. Coach Lea is optimistic that many of the offensive players missing from Friday’s scrimmage due to minor injuries can return to the field by the end of next week.