The Commodores lost their third straight match in a 5-2 defeat to the Bulldogs. 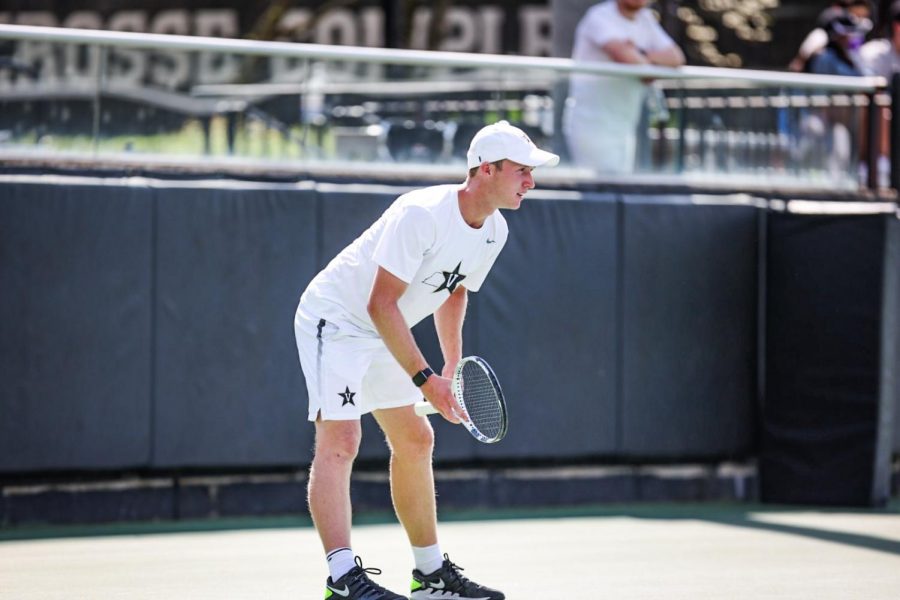 Vanderbilt men’s tennis faced off against the No. 16 Mississippi State Bulldogs on Friday afternoon. Coming into the match with a 6-13 record and having lost two-straight, Vanderbilt looked to get back in the win column on Friday. In the end, the Bulldogs took the doubles point 2-0 and four of the six singles matches for an overall 5-2 victory over the Commodores.

Beginning the day with three doubles matches, the Bulldogs commandingly took the doubles point to start off the afternoon strong.

Court One’s match showcased a decisive 6-2 victory for Mississippi State’s Florian Broska and Gregor Ramskogler over Vanderbilt’s George Harwell and Max Freeman. The Bulldogs jumped out to an early 3-1 lead and kept their momentum throughout the rest of the match. The Bulldogs maintained control of the match throughout and won it comfortably.

The match on Court Two featured the Commodore’s duo of Marcus Ferreira and Adam Sraberg against Mississippi State’s Davide Tortora and Nemanja Malsevic. Tortora was in control of his serve for the entire match, frequently giving the Bulldogs an advantage early in the point. Great returns from Ferreira and Sraberg kept them in the match late, but they eventually fell by a score of 6-2.

The other early match ended in a non-decision between Mississippi State’s Giovanni Oradini and Nicolas Ocana and Vanderbilt’s Jeremie Casabon and Connor Robb-Wilcox. It was a competitive match, but as Mississippi State had won the first two doubles matches, and therefore clinched the doubles point, the third match ended before it was completed.

“The doubles really are a sprint and it’s tough to come back from a slow start. We just got too far behind, and we did not play well generally,” Vanderbilt head coach Ian Duvenhage said of his team’s doubles performance.

The first singles decision of the day came on Court Five, which featured the Commodores’ Macsen Sisam versus Carles Hernandez. Sisam was in command of his stroke early and used a few floated shots by Hernandez early to his advantage, winning the first set 6-3. Hernandez could not keep up with the pace set by Sisam early in the match, who went on to comfortably win the second set 6-2 and get the Commodores their first victory of the afternoon.

“I thought Macsen [Sisam] has been playing much better as of late and he’s playing more aggressively, so I’m very happy for him that he was able to get the win today,” Duvenhage said of his veteran player.

The match on Court Three had Marcus Ferrerira against Mississippi State’s Alberto Colas. Ferreira’s shot was a bit erratic in the first set, something Colas took advantage of to win the first set 6-3. Colas kept the pressure on Ferreira with dropshots late in the match and eventually went on to commandingly win the second set and the match by a score of 6-3, 6-4.

Vanderbilt’s George Harwell faced the Bulldogs’ Giovanni Oradini in a competitive match on Court One. Coming off of a doubles defeat, Harwell entered the match energized and showcased his tremendous range, cutting across the court frequently for his returns. Oradini took the first set 6-3, but Harwell bounced back to win 6-3 in the second set. In the final set, Oradini took control early and fought off a late comeback attempt to win 6-4.

Court Two’s singles match was an extremely vocal contest which had Vanderbilt’s Jeremie Casabon versus Florian Broska. Casabon went up 2-0 in the first set before Broska began to assert himself in the match, using precise serves to tie the first set 3-3. The crowd was certainly a factor in this one, with cheers coming from both sides after nearly every point. Broska used a late surge to win the first set 6-4. Broska took control of the match with great serves in the second set, and went on to win the second set 6-3 for a Bulldogs victory.

In the fourth singles match, Vanderbilt’s Max Freeman faced off against Nemanja Malesevic. Freeman was extremely precise with his returns in this match, using tight shots down the line to jump out to an early 4-0 lead in the first set, which he eventually won 6-1. Malesevic was resilient in the second set, setting the pace with great serves early and bouncing back to win the set 6-4. In the final set, Malesevic put Freeman under immense pressure with tight shots down the line, and jumped out to a 4-2 lead. Malesevic went on to win the final set 6-2, giving the Bulldogs another point.

Joubert Klopper faced off against Gregor Ramskogler in an exciting match on Court Six. Both sides came into the match with high energy which led to a tight match highlighted by lengthy rallies in the first set, which Klopper won 7-6. The second set was equally as tight at the midway point, with Ramskogler tying it up at 3-3. Klopper went on to pull away and win the set 7-5, giving Vanderbilt its second and final point of the day.

After dropping their third straight match, the Commodores will look to bounce back in their next match against #12 Ole Miss on April 11th.