Georgia hands Vanderbilt its first series loss of the season

The VandyBoys’ dormant offense was its downfall in their 9-1 home loss. 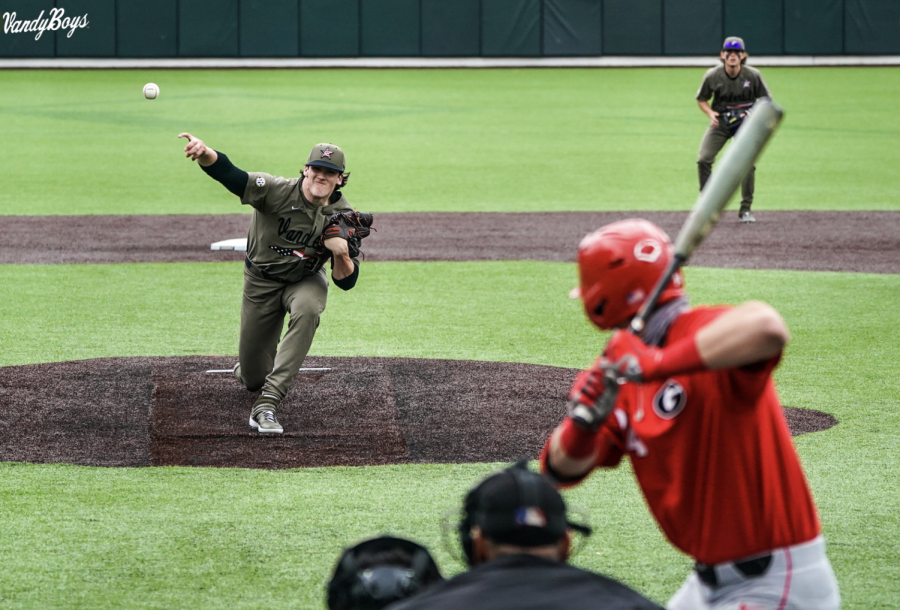 After splitting the first two games, the visiting Georgia Bulldogs were able to take the series against Vanderbilt with a 9-1 victory today. The intermittent rain dampened the Vanderbilt offense, as the VandyBoys struck out 12 times.

Freshman pitcher Patrick Reilly got the nod on the bump for the Commodores instead of usual game three starter Thomas Schultz, and he started off the top of the first red-hot. He recorded two strikeouts, using a combination of a quick delivery and blazing fastballs.

Georgia got on the scoreboard first in the top of the second, as Reilly gave up a base hit then allowed a runner to get to second on a fielder’s choice. Another base hit drove in a run, making the score 1-0 Georgia.

The Commodores attempted to answer back in the bottom of the second but were unable to, despite notching back-to-back  singles from freshman left fielder Jack Bulger and sophomore catcher CJ Rodriguez.

Georgia struck again in the top of the fourth, with a two-run home run to left field after Reilly walked his first batter of the day. Reilly was then replaced by sophomore reliever Sam Hilboki. In his first career start, Reilly finished with three strikeouts but gave up three hits and three earned runs.

“I thought [Reilly] pitched well until pitch 50. [His] fastball certainly has bite to it, and his breaking ball is developing. But he lost control the last inning and got stung,” Head coach Tim Corbin said.

Hilboki was able to record two strikeouts but gave up another run before exiting the game with an injury to his throwing arm. Sophomore pitcher Chris McElvain was called up to finish the inning, which finally ended after a Bulldog was caught stealing. By the end of the fourth, the Bulldogs had extended their lead to 4-0.

The Commodores finally had some life in the bottom of the fifth. Senior third baseman Jayson Gonzalez got things started with a single up the middle before sophomore designated hitter Spencer Jones dropped a popup in between three Georgia fielders to get on base. Junior right fielder Javier Vaz then sacrifice bunted to move runners to second and third. However, back-to-back Vanderbilt strikeouts ended the inning before the Commodores could scratch a run across the board.

Both the sixth and seventh innings were uneventful, other than some spectacular defense from the middle of the Vanderbilt infield. Both sophomore shortstop Carter Young and sophomore second baseman Parker Noland were flying around the diamond all game, robbing Georgia of multiple base hits.

In the top of the eighth, McElvain walked the leadoff batter, who eventually scored on a two-out RBI double down the third base line. McElvain was replaced by freshman lefty Hunter Owen. McElvain finished his four-inning outing with two strikeouts but walked one and allowed a run to score.

Corbin spoke about McElvain’s resiliency and his ability to adapt. The head coach said that his pitcher did exactly what he was supposed to do.

“He didn’t know when he was gonna have to come in when Sammy [Hilboki] went down, he even had to warm up on the mound. He kept it close but we couldn’t come up with the big hit,” Corbin said.

On Owen’s third pitch, the runner he inherited from McElvain scored from second on another RBI double, making the score 6-0 Georgia.

The Commodores finally brought a runner home in the bottom of the eighth. Freshman center fielder Enrique Bradfield Jr. reached first on a bunt and reached home after a line drive to the left field wall by Young. Young was then awarded third base after a Bulldog balk. The rally was short lived, however, as another Commodore strikeout ended the inning.

When asked about today’s offensive woes, Corbin said, “We have a lot of inexperience in the lineup, it leaves a lot of holes. I really thought we’d hit better today, but we just didn’t.”

Vanderbilt made its final pitching change in the top of the ninth, bringing in freshman closer Miles Garrett to replace Owen. Owen ended the day after giving up one hit through only six pitches. Garrett struck out the leadoff batter, but hit the next one before fielding a grounder and nearly throwing it into the Bulldog dugout. Unfortunately, this was the beginning of a three-run inning for Georgia. Another RBI double and two RBI singles gave the Bulldogs an eight-run lead going into the bottom of the ninth.

The Commodores needed a monumental final offensive push in order to salvage the series. However, they were unable to do so, despite a Gonzalez two-out single.

The final score of the rubber match was 9-1 in favor of the Bulldogs. The VandyBoys return to action on April 13 at Hawkins Field against Eastern Kentucky.