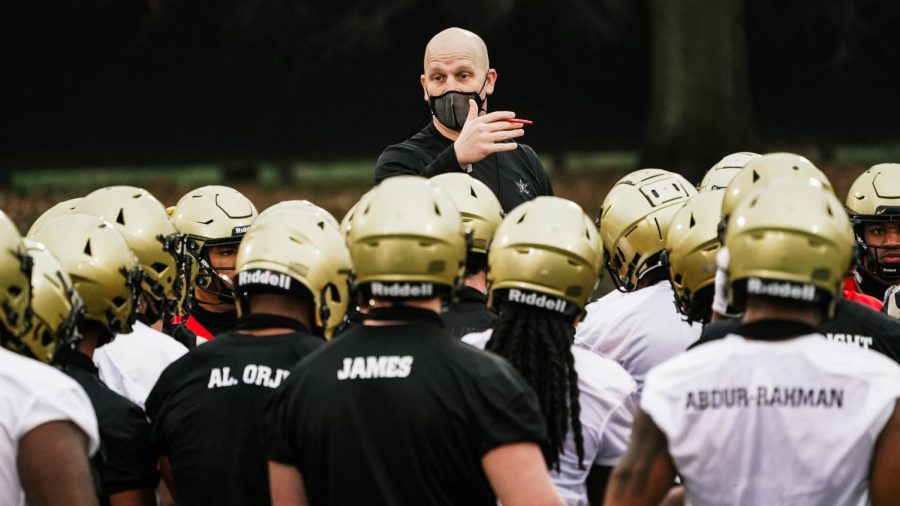 Clark Lea at the first official spring practice of 2021. (Twitter/@VandyFootball)

A day before Vanderbilt football’s second spring scrimmage, head coach Clark Lea answered questions about where the team stands right now, and his part in orchestrating a successful transition to the 2021 season. He started by highlighting the role he’ll play as a defensive coach analyzing the Commodore offense.

“Ultimately it’s all my responsibility, and I trust these guys. They’re smart, they’re capable, and I want to see their vision come to fruition,” Lea said. “And not being an offensive guy, I can still contribute to the offensive side of the ball because my responsibility has been defending the modern offense.”

Lea went on to expound on the atmosphere surrounding his coaching staff and the shared vision they have for the program. It’s always difficult to find the right balance of shared beliefs and fresh ideas. After all, a coaching staff needs to have divergent opinions to thrive in an ever-changing college football environment. Lea explained that he wants his staff to be on the same page, while simultaneously communicating their message through different mediums.

“There’s alignment and there’s an understanding of what my vision for this program is and how this program is going to find success. There is total alignment in those areas, but I want personality differences. I think that’s important.” Lea said. “I think the message needs to be the same, but the way it’s packaged needs to be different—that keeps it fresh and keeps players engaged.”

Lea also briefly touched on the importance of treating practices and these scrimmages as games. He wanted the intensity and level of competition to be the same out-of-game as it was in-game. He further noted that he looked forward to seeing which players, freshman specifically, would rise to the challenge under the bright lights tomorrow.

“I’ll be excited to see who steps up and who handles the adversity well,” Lea said. “Who breaks the play when the offense needs a play to break and who attacks the ball on defense and gets a turnover? Hopefully moving forward, those things [intensity and competitiveness] won’t be relegated to scrimmages. That’ll be stuff that we see happening day in day out.”

Lea seemed pleased with where his coaching staff stood; now, he hopes to do more evaluation of the on-field talent. Tomorrow’s scrimmage will be kept shorter with the team already banged up but will, at the same time, be telling of where improvements need to be made to allow this Vanderbilt football team to be competitive come August.