The VandyBoys gave up seven home runs in an uncharacteristically sloppy performance against Georgia in the series opener. 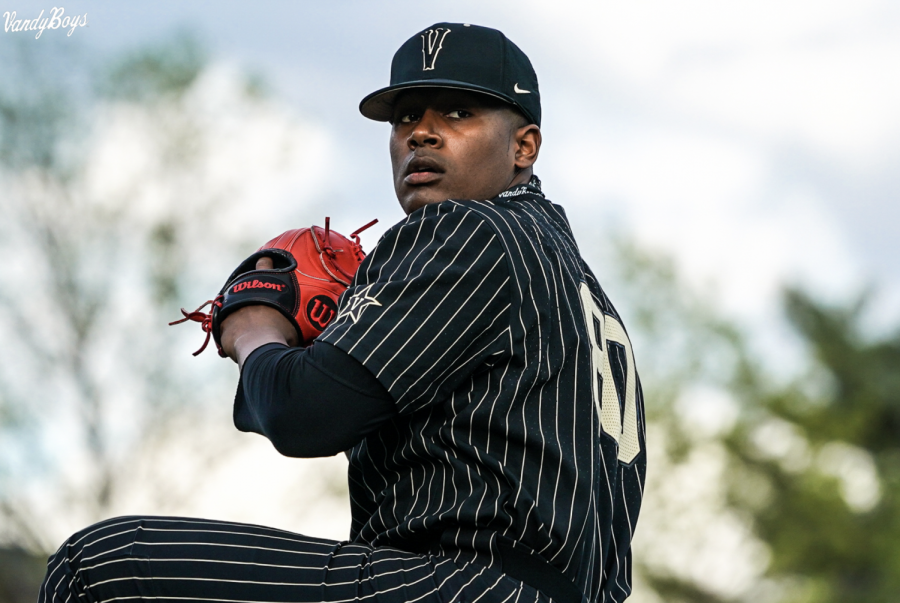 398 days. That’s how long it’s been since Kumar Rocker took a loss as the starting pitcher for the Vanderbilt Commodores, a 3-2 loss at UCLA in the shortened 2020 campaign. Despite Rocker’s eventual 12 strikeouts, the Commodores couldn’t overcome a turbulent start from him and an uncharacteristically sloppy night all around, falling to the Georgia Bulldogs (19-10, 4-6) 14-2 to fall to 24-4 (8-2) on the year. The loss snapped a nine-game winning streak for the Commodores.

On a perfect evening in Nashville, the top of the Bulldogs’ lineup jumped all over Rocker right from the get-go. Center fielder Ben Anderson set the tone for Georgia by poking a dribbler through the left side of the infield with two strikes to start things off. After issuing a walk to the next batter, Rocker then let up a three-run homer to Corey Collins. Just like that, Georgia led 3-0 and Rocker had not gotten an out. Vanderbilt let a ball that should have been caught drop into shallow right on the next batter, but Rocker worked his way out of the inning from there.

“They landed a couple of punches in that first inning. They ambushed him—they took good swings at the fastball and their bats looked quick,” Coach Tim Corbin said about Rocker.

Jack Bulger got the Commodore offense going in the bottom half of the inning, scoring Dominic Keegan, who reached on a walk, with a scorching double through the left side of the infield. CJ Rodriguez then walked, but sophomore Parker Noland couldn’t bring him in and grounded out to end the inning, sparking the trend of runners left on base for the Commodores on Thursday night.

Rocker settled in quite well over the next few frames. Despite racking up 51 pitches through two innings, the right-hander worked through the Bulldogs with relative ease from the second inning to the fifth.

Vanderbilt’s bats remained quiet in the mid-innings with just one hit off of Bulldog reliever Will Pearson, who entered the game for Luke Wagner in the top of the third. The best chance for the Commodores came in the bottom of the fourth when Noland walked to lead off the inning. But the VandyBoys could not capitalize as Pearson picked the sophomore off of first base, before Spencer Jones could rope a double into center field. Jones would move over to third on a Pearson balk, but freshman Calvin Hewett, who started in right for an injured Isaiah Thomas, was unable to bring him home, grounding out to end the inning.

Then, Rocker seemed to lose all momentum as the top of the fifth mirrored the top of the first. Corbin sent the junior flamethrower out to the mound having thrown 94 pitches through five, and it looked as though that was all he had Thursday evening.

Georgia’s cleanup hitter Connor Tate lined a solo shot over the fence in left center to start the inning. Then, Riley King ripped a single and Garrett Blaylock hit a moonshot onto Perry Wallace Way over the right field bleachers. Just like that, Georgia pushed their lead to 6-1 and Coach Corbin was forced to go to Nick Maldonado out of the bullpen. The freshman reliever went 1-2-3 to get Vanderbilt out of the inning. Rocker finished with 12 strikeouts through five innings, but tied a career-high six earned runs allowed.

The Commodores made things interesting in the bottom half of the sixth, though. Jayson Gonzalez smoked a line drive to left center for a double. Then, pinch hitter Javier Vaz worked a walk and Enrique Bradfield Jr. got plunked by an offspeed pitch to load the bases for Carter Young, who already had a hit on the night. But Georgia’s reliever Michael Polk got Young to roll over to short and the Vanderbilt offense left three more runners on base, bringing their total to 10 for the evening.

Corbin called on Hugh Fisher to pitch the seventh, but Vanderbilt continued to unravel. Fisher loaded up the bases by walking two and hitting another, then induced a routine groundball that got through Young’s legs at short and brought two Bulldogs home. Despite getting two outs after that, Fisher then threw a 3-0 wild pitch that brought in another Georgia player to make the score 9-1.

The Vanderbilt offense tried to get a rally started in the bottom of the seventh. Keegan drilled a single to center to get things going, but Jack Bulger, who had had one of the better offensive nights for the Commodores, grounded into an easy double play. Pinch hitter Maxwell Romero Jr. lined a shot off the right field wall, then grabbed third on a ball in the dirt. Parker Noland worked his second walk of the night to put runners at the corners and then Georgia reliever Nolan Crisp balked to bring Romero home from third. Gonzalez walked on the next pitch, but Spencer Jones went down looking to leave two more Commodore runners stranded.

The Bulldogs went three up, three down to kick off the eighth inning. Vaz and Young both walked for Vanderbilt, but Bulger struck out to end the inning leaving them on first and second.

Then, Jayson Gonzalez couldn’t handle a spinner to third base that extended the inning, and Ben Anderson punished Moore by blasting a ball to dead center for the Bulldogs seventh home run of the night and fourth of the inning. Carter Young made his second error of the night, this one on a bad throw, to extend the inning before Moore threw a strikeout to end the frame. That would thankfully be the extent of the damage as the Bulldogs took the series opener 14-2.

Coach Corbin was not happy with the team’s performance in the post game press conference.

“They had machine guns, we had squirt guns,” Corbin said. “They swung the bat well, we swung it like shit.”

If there was one positive on the night, Georgia worked through its bullpen early in this series. The Bulldog skipper enlisted six different pitchers on Thursday night, which figures to factor during the course of the rest of the series.

All in all, it was an off night for Vanderbilt in every sense of the phrase. From the normally unhittable Rocker getting lit up early on, to the double-digit runners left on base, to the seven home runs allowed, to the errors and pickoffs, this was not the Commodores’ night. Alas, such is the game of baseball and Vanderbilt will have another chance to earn its 25th win of the season tomorrow night with Jack Leiter taking the mound at 6:30 pm CST at Hawkins Field.