Christian Little had a nice day on the mound, but the relief pitching stole the show, collectively pitching five innings and letting up only one earned run. 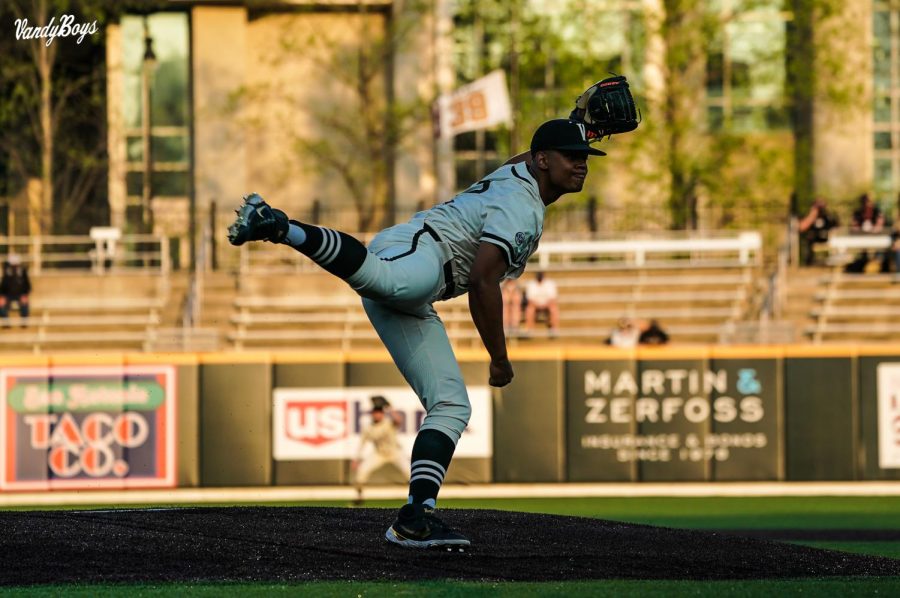 A beautiful day was followed by a beautiful night at Hawkins Field for the VandyBoys. Luckily, the Commodores were able to enjoy the nice evening with a tight, 5-4 win over the visiting UT Martin Skyhawks.

All in all, the visitors came ready to play, putting together a nearly complete day on the mound.

“I thought they were very effective throughout the game, and how they pitched, to be honest with you, was well enough to win the baseball game,” said head coach Tim Corbin.

The game started out with freshman Christian Little on the rubber for Vanderbilt, but the Skyhawks rose up to the challenge. After an initial strikeout, Little allowed a double and put another runner on base with the first walk of the day. He struck out another, but allowed a deep hit to right field which scored a runner and also got a Skyhawk to commit to coming home where he was promptly thrown out for the final out of the inning. Despite this early bat work from UT-Martin, Little escaped the inning with two strikeouts and only one run allowed.

Little was quickly thrust onto the mound again after a quick three-and-out stalled Vanderbilt’s offense. However, he was up for the challenge this time, earning two more strikeouts along the way to a quick top of the second. The Commodores brought the bats in the bottom of the second and got some men on base by way of a fielding error, which put Parker Noland in play, and a well-placed bunt from Jack Bulger. A fly ball out to left field sent Noland to third and though he made it in time, he overslid and was tagged out, causing an unfortunate double play that left Bulger alone on first with two outs. Then, Max Romero Jr. hit a deep fly out to left that seemed destined to end the inning. In fact, left fielder Noah Thigpen had the ball in his glove, but when he hit the wall, the ball fell out of his mitt, allowing Bulger to come home for the first Vanderbilt run of the day. From there, Cooper Davis found a gap in shallow left field and methodically placed a ball in the open space, allowing Romero to touch home.

Going into the third, Vanderbilt was up 2-1, and after a quick flyout and strikeout, it seemed as if the Commodores would go back to work offensively. However, this time a misplayed pop fly in left field prolonged the inning, allowing a Skyhawk to get on base unnecessarily. The next batter up, Casey Harford, made the Commodores pay to the tune of a two-run shot. It put UT-Martin up 3-2 for half an inning before the Commodores tied it up with a Dominic Keegan single that scored Carter Young.

The fourth and fifth innings proved to be mostly uneventful with mostly pop flies and little offense.

Then in the top of the sixth, Vanderbilt freshman Hunter Owen, who replaced Little before the top of the fifth inning, gave up a few singles and a sacrifice fly, allowing UT Martin to score a run and go ahead 4-3 in the game. Though he did allow this one earned run, Owen pitched a nice couple of innings, allowing just two hits and striking out three.

From there, the game became a simple matter of who would blink first on the mound. Evidently, it was UT Martin who budged. The Skyhawks had previously thrown an impressive game up until the bottom of the sixth, but there, sophomore pitcher Seth Petry gave up two walks and also hit two batters. His mishaps, along with a Noland single, were enough to send two VandyBoys home and put the team up 5-4.

Then, Chris McElvain, who was later credited with the win, and Luke Murphy put together a stellar three innings. The duo allowed no hits and struck out seven of the nine batters they faced.

In fact, after the game, Corbin had some praise for the sophomore McElvain.

“I think his [McElvain’s] execution has continually gotten better,” said Corbin. “I thought his fastball command at the beginning of the year was just so-so, but I thought tonight was a good indication of what he’s capable of.”

As for Vanderbilt, with the exception of another hit-by-pitch, their offense was largely stationary for the rest of the night. The Commodore bats were unable to log any more runs, but thanks to stellar relieving, they hardly needed it.

However, Corbin still reflected on his team’s performance in his post-game press conference, praising the Skyhawks and noting the difficulty the Commodores had today in getting the bats moving.

Overall, as Corbin noted, the Commodores have some work to do offensively, but getting the win was important for the team early in the week.

Moving forward after this 5-4 victory over the UT Martin Skyhawks, the 24-3 VandyBoys will have a three-game series against the Georgia Bulldogs starting this Thursday, April 8 at home, and at 18-10, the conference opponent will surely put up a good fight.