Not done yet: George Harwell wants to leave a legacy at Vanderbilt

Harwell, the top player on the men’s tennis team, will be returning for a fifth year next year. 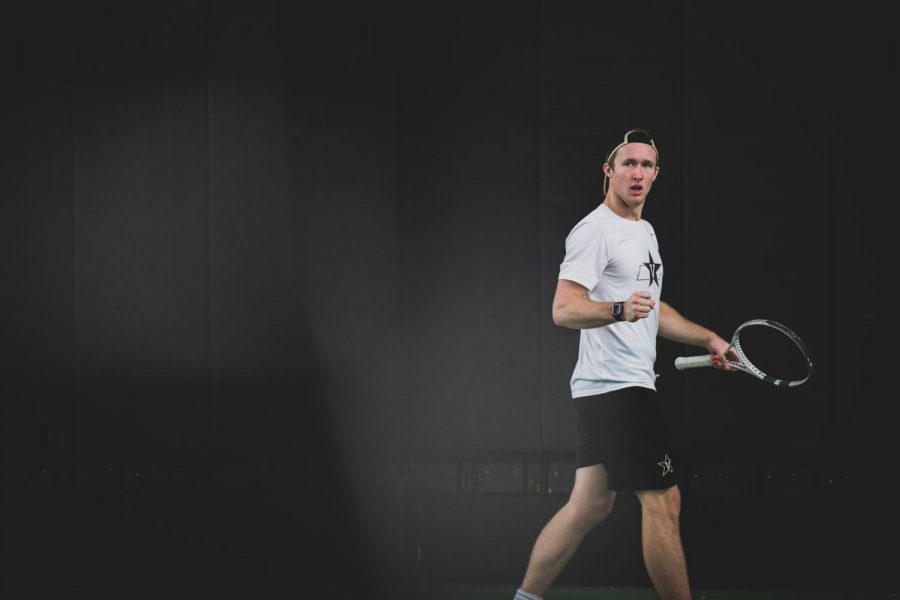 As a senior at Montgomery Bell Academy, Harwell began to be recruited by his dream school and received a scholarship offer.

“I went on a visit and loved all the guys and coaches and immediately committed,” Harwell said.

Harwell thrived in the team environment of college tennis. Growing up playing team sports made him miss the community in tennis, which is mostly an individual sport at the junior level.

“I love the team part of it, and I definitely perform better when we’re playing team matches than I do in individual tournaments,” Harwell said.

Harwell made an instant impact as a freshman. He won 17 doubles matches and only lost three times in the regular season. He posted a 27-8 overall record in singles play.

As he got stronger on the court, he matured off of it as well.“I’m way more mature than I was,” Harwell said. “I feel like I wouldn’t even recognize myself in high school or my freshman year.”

He cited Daniel Valent, who was a senior when Harwell was a freshman, as a key influence in his life.

“He was probably the hardest worker I had ever been around,” Harwell said of Valent. “He was an amazing tennis player, and it’s just a direct result of the work he’s put in. I think that was really eye opening as a freshman. I realized that if you put in the work, you’re going to find success.”

After a successful freshman season, his sophomore year was challenging, as Harwell went 19-18 in singles play and 23-15 in doubles play.

Harwell moved to the No.1 court as a junior and played well against opponents’ best players. He had a 21-9 record in singles play before the season was cancelled due to COVID-19 on March 14.

But a silver lining came out of the cancellation. The NCAA approved a blanket waiver for all spring sport athletes to get another year of eligibility.

Harwell graduates in May with a degree in Human and Organizational Development. Taking advantage of the extra year of eligibility, he will return for a fifth year and earn his Master’s in Finance from the Owen Graduate School of Management.

He hopes to work in commercial real estate once his college tennis career is over, and he’s on the path to doing so with an internship at JLL in Atlanta this summer.

In the meantime, Harwell is focused on finishing out the season strong and earning the team’s first Southeastern Conference (SEC) victory in one of its next four matches.

Harwell has locked down the No.1 court in singles for the second consecutive year, and was ranked No. 117 in the country in singles to start the 2021 spring season. He has gone 10-6 on the top court through the first 17 matches of the season.

Although this season has been difficult for the Commodores, who are 6-11 overall and 0-8 in the SEC, there is a lot to build on for next year.

“We have a good team coming back,” Harwell said. “We’ve got a good recruiting class coming in and with everyone coming back, I think that next year should be a lot of fun.”

Harwell will finish off his legacy next season, and he wants to make sure he completes it on his terms.

“I want my legacy to be the guy who played really hard for the team and never gave up, even when we’re losing in a season like this,” Harwell said. “I feel like I’m still going out there and fighting every single match for the team, and I feel like my legacy will be a guy that performed better when the team needed him.”